A description of how to apply osteometric markers to determine the tissue depth of each facial muscle.
© The University of Sheffield

In the next few steps, we’ll learn some of the basic knowledge and expertise that is needed in the facial reconstruction process. This includes the muscle groups of the face and the location and tissue depth of each of these muscles.

Before we explore the muscle groups to be assembled, we need to prepare the skull. 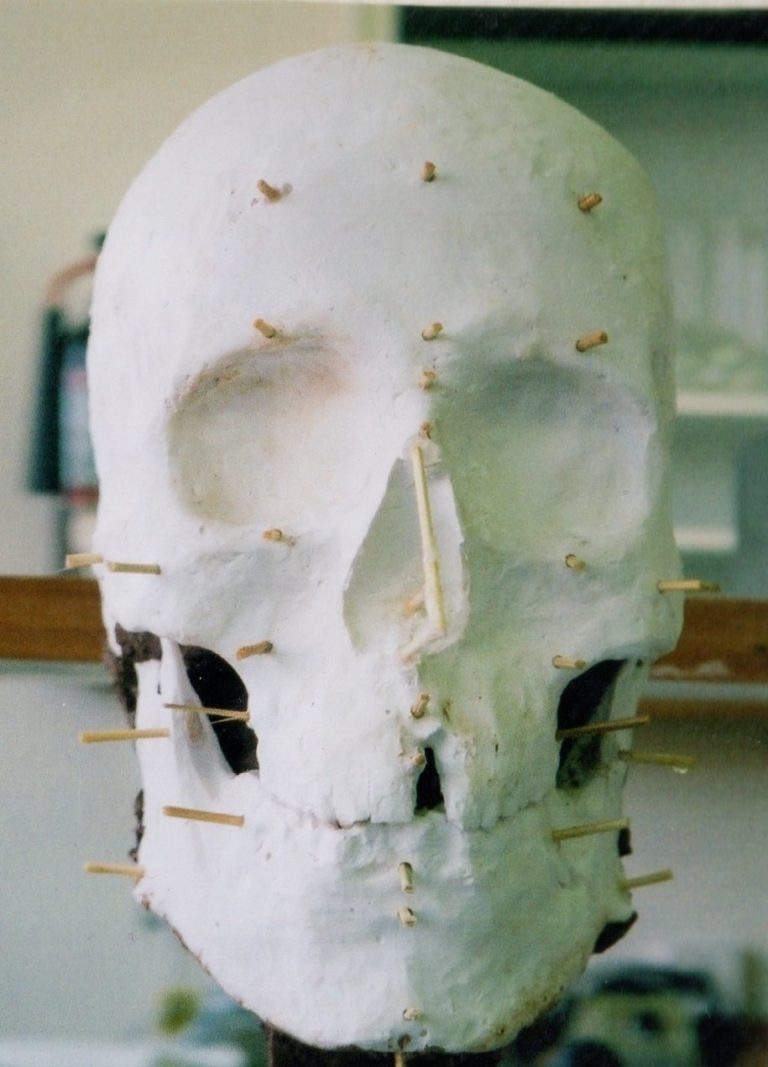 The skull is placed onto a specially designed stand and the jaw bone (mandible) arranged in an anatomical position and secured with putty or clay. This needs to be done as the jaw bone is not connected to the skull once the ligaments and tendons are no longer present. 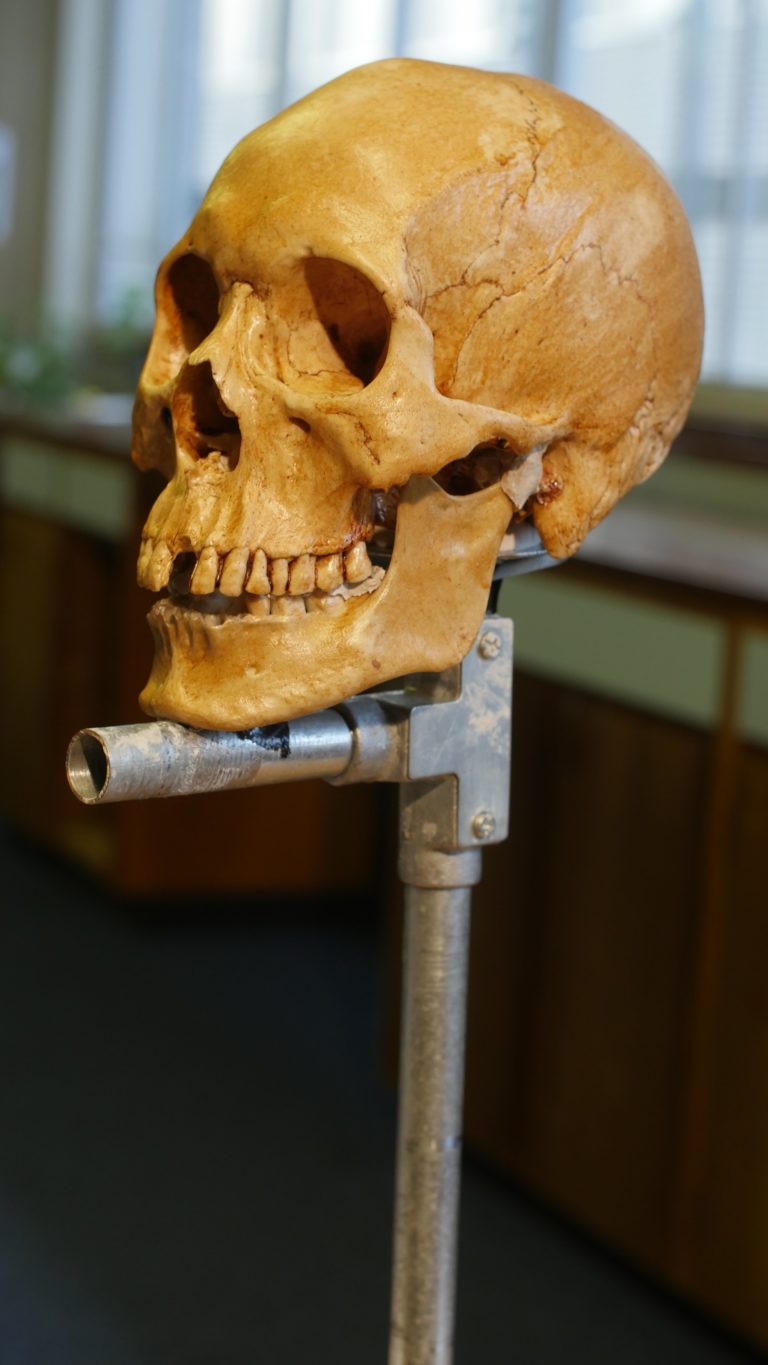 A replica of Mr. X’s skull having been placed on a stand, specially made for facial reconstructions. We can see the clay used to attach the mandible (jaw bone) to the skull

The skull is levelled to ensure it is parallel to the ground by placing a spirit level along the ‘Frankfurt plane’. The Frankfurt plane lies between the lowest point of the eye socket (inferior orbital border) and the ear canal (external auditory meatus). 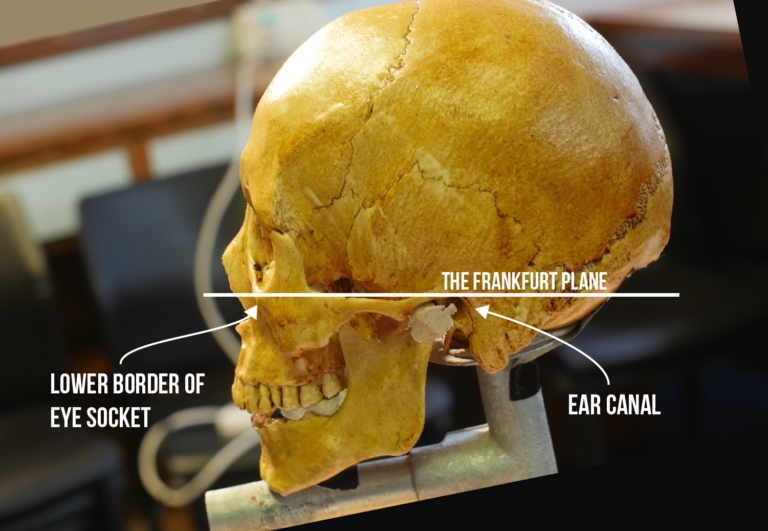 The location of ‘The Frankfurt Plane’

Over a century ago, the values of each of these points was defined and agreed to allow researchers to make comparative measurements of the skull (and the rest of the skeleton) in a unified and unambiguous manner. The values of each point were determined by numerous studies of tissue morphology in living and deceased men and women from a range of ancestral groups.

There are a large number of osteometric points throughout the skull and skeleton. When building a facial reconstruction using clay (the Manchester technique) 16 osteometric markers are usually applied to the face. The markers are often small wooden or plastic pegs and may be glued or screwed to the skull. 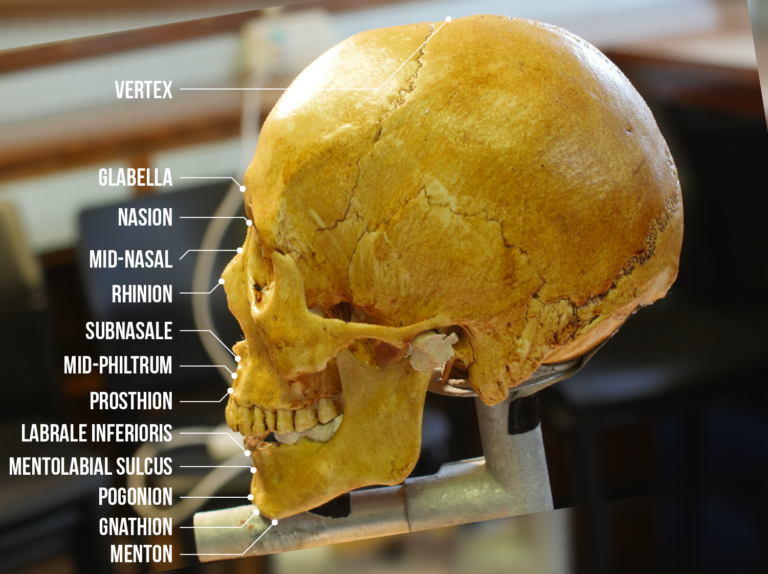 A replica of Mr. X’s skull showing the points at which osteometric markers are placed

Once the osteometric markers have been secured, the process of attaching the facial muscles to these points can begin. The markers can now act as an indication of the depth of each of the muscles as they are applied to the face.