There are different types of propulsion system, but they all work by ejecting mass out the back as an exhaust. This is the ‘rocket effect’ and is really just a consequence of Newton’s famous third law of motion: ‘For every action there is an equal and opposite reaction’. 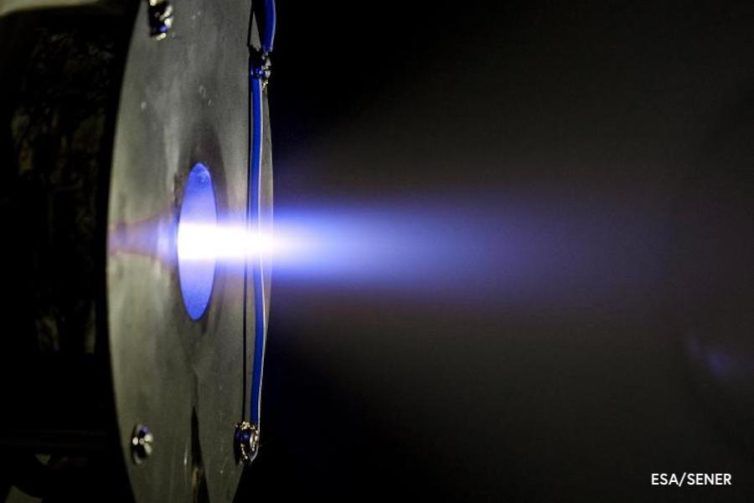 Since their first flight into space during the 20th century, satellites have become invaluable to our everyday lives. They provide the means to observe the Earth from space with powerful cameras and other instruments, facilitate communication and entertainment across the globe and enable navigation at the touch of a button with global positioning systems. By harnessing the properties of low temperature plasmas, we can create compact, efficient thrusters for these satellites. Might this technology also make longer-distance space travel, such as crewed missions to Mars possible?

Satellites travel to and through space with the means of thruster propulsion systems. These thrusters launch their payloads from the Earth’s surface and keep the satellites in position in orbit, overcoming the effects of gravity and atmospheric drag. There are different types of propulsion system, but they all work by ejecting mass out the back as an exhaust. This is the ‘rocket effect’ and is really just a consequence of Newton’s famous third law of motion: ‘For every action there is an equal and opposite reaction’.

We can calculate the change in velocity of a rocket (Delta v), using the rocket equation

where (m_p) is the payload mass, (m_f) is the mass of fuel ejected, and (v_e) is the exhaust velocity, the speed at which the fuel exits the thruster. There are two ways to increase the (Delta v) for a given payload mass. We could expel more fuel (increase (m_f)), or push it out faster (increase (v_e)).

The simplest propulsion system consists of a container of fuel, for example pressurised gas, which is known as ‘propellant’. This accelerates out of the back of the spacecraft to produce thrust (Figure 1). 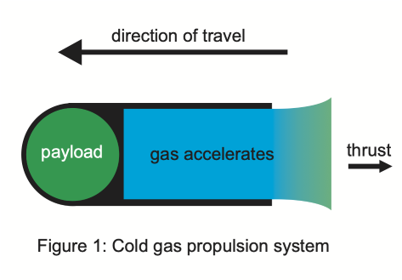 To increase the size of the thrust, for example to launch a rocket from the Earth’s surface, a different system known as chemical propulsion becomes suitable. Here, multiple propellant fuels undergo a chemical combustion reaction to heat up the exhaust. This makes the ejected mass move faster, increasing the exhaust velocity and generating larger thrusts than the cold-gas case (Figure 2). 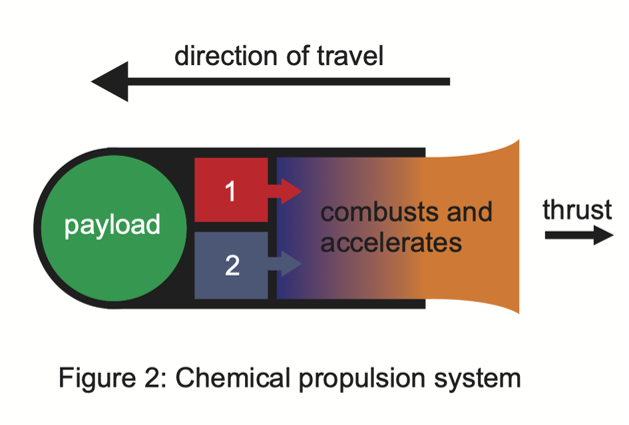 However, chemical propulsion systems use up their propellant fuel very rapidly. This is great for getting rockets off the ground, where we need to apply huge amounts of thrust for just a few minutes to overcome Earth’s gravity. They are not so well-suited for long-duration journeys, such as those required to maintain the position of communications satellites in orbit for long periods of time. For this application, once the satellite is in orbit it is preferable to generate a relatively small amount of thrust with a higher fuel efficiency. This is achieved by using small fuel masses, but increasing the exhaust velocity.

To maximise the exhaust speed and fuel efficiency, it is possible to convert the gas into a low temperature plasma. In plasma propulsion systems (Figure 3) the application of an electric force to the charged particles in the plasma accelerates them into an exhaust plume. In this way they can obtain much higher speeds than are otherwise possible in the cold-gas and chemical propulsion systems, potentially over 10 times higher. This increases both fuel efficiency and the possibilities for space missions. 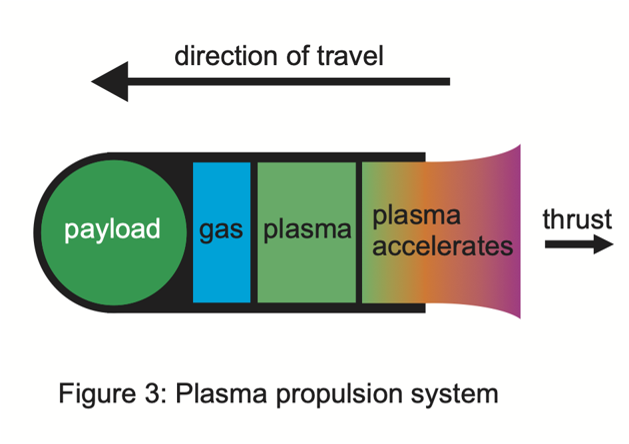 Plasma thrusters are currently used for small corrections to satellite orbits. The need for these corrections can usually be foreseen long before they are needed, so a slow gentle correction applied by a plasma thruster is perfectly adequate to ensure the satellite maintains the desired course.

However, larger plasma thrusters with even higher exhaust velocities, hundreds of times larger than chemical rockets, are envisaged which could be used for interplanetary travel. Plasma thrusters are under development now, which could help us reach Mars in just over one month, again with a slow, steady acceleration up to large speeds, but using up only a small amount of fuel.

Would you be tempted by a trip to Mars if the travel was only a two-month round trip?