How fusion technology can be used for energy production

This article describes how the nuclear physics of fusion can be harnessed for energy production and the challenges faced. 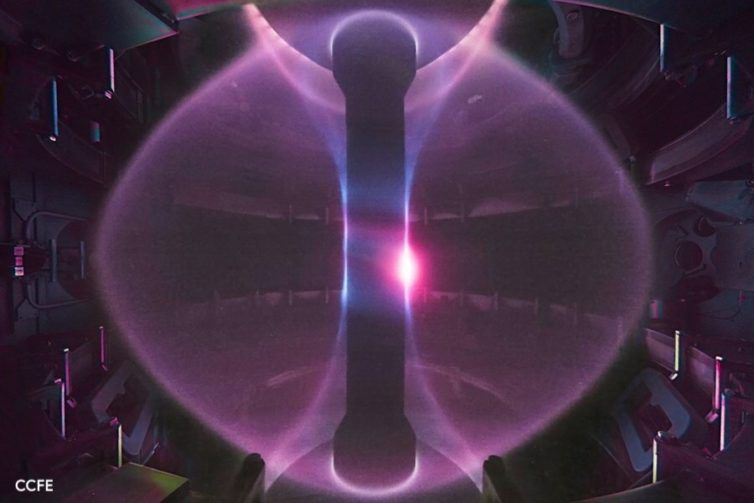 If we can push together two light nuclei, they can fuse and release their excess energy. So how do we make use of this in practice?

The problem is that nuclei carry positive electric charges due to the protons contained within them. Just like pushing together the like poles of magnets, pushing together two positively charged nuclei until they get close enough for the fusion process to occur requires a lot of energy.

In other words, we have to give the nuclei a ‘jump-start’ to get them close enough to fuse, after which the strong force takes over and gives us back far more energy than we had to put in due to the release of huge amounts of binding energy.

We can do three things that help to optimise the fusion process:

We can combine these three key parameters to form the fusion triple product, (nTtau), where (n) is the number of hydrogen nuclei per cubic metre, (T) is the plasma temperature, and (tau) is the confinement time.

The value of this triple product is a measure of how close we are to achieving fusion conditions, with larger values being better.

It is hard to find a way to make all three components of the triple product simultaneously large, but there are a number of ways to maximise our triple product.

One is called inertial confinement fusion. In this, we push the fuel up to a very high density, but for a short time.

Creating a container for our burning plasma

In this article, we will concentrate on an approach that keeps plasma density relatively modest, but confines the plasma for a much longer time.

To do this we create a container for our ‘burning’ plasma. As the plasma is so hot, we cannot use physical walls for our container – they would just melt. However, as the plasma is composed of charged particles, we can confine it using magnetic fields.

One design is the tokamak, where the magnetic fields are designed to confine the plasma to a doughnut-shaped (more technically called toroidal) cloud in the middle of the machine.

The largest tokamak in the world is currently the Joint European Torus (JET) at Culham Centre for Fusion Energy in Oxfordshire.

Construction of a new fusion reactor, ITER, is also underway in the South of France. ITER will be the world’s largest tokamak and is a collaboration between 35 nations.

A diagram is shown below. Note the person in the bottom right of the image to get a sense of the scale! 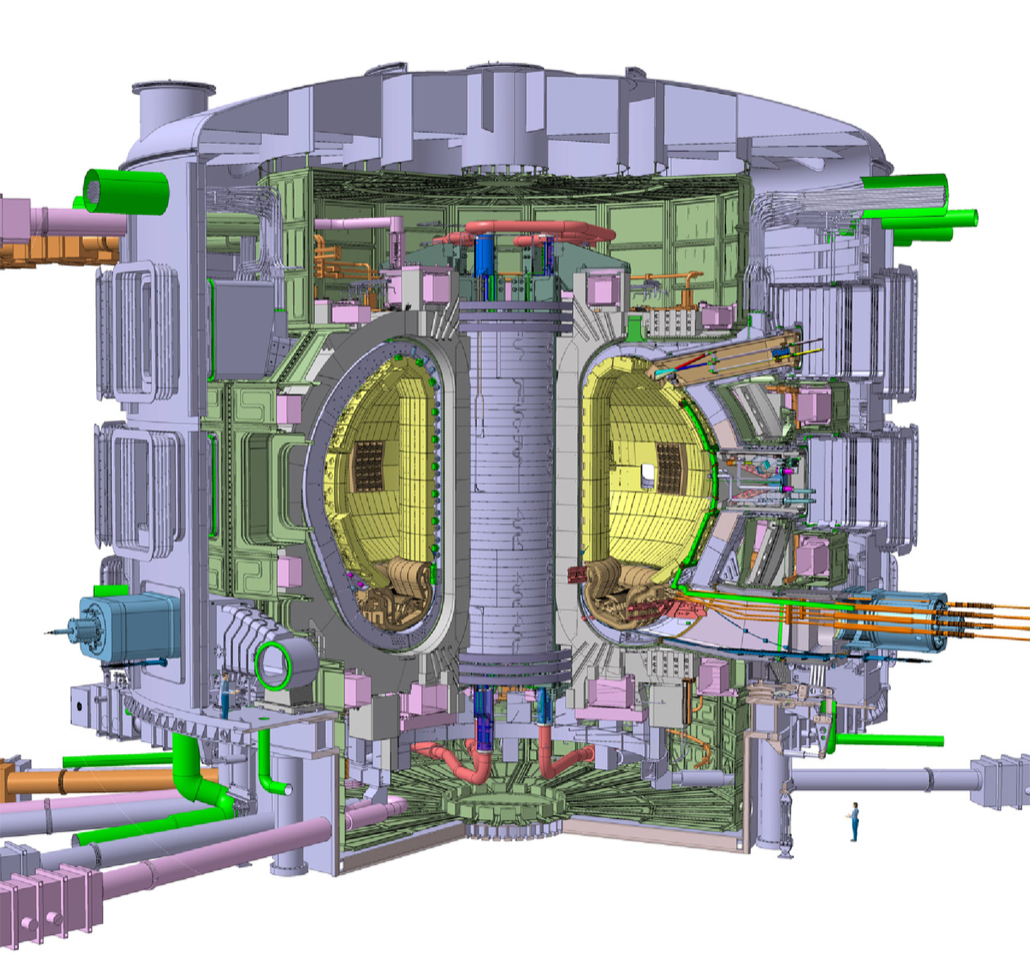 The yellow chamber in the middle of the image shows where the plasma is held, and all the structures around this are required to confine and heat the plasma.

The plasma is heated by a number of mechanisms, including passing an electric current through it (in the same way a wire becomes hot as electricity passes through it). This is continued until we reach the temperature required for fusion.

The deuterium-tritium fusion reactions produce helium nuclei and neutrons, each carrying large amounts of kinetic energy. As the helium nuclei are charged, they remain trapped in the tokamak and their energy – a fifth of the fusion energy – is used to keep the deuterium and tritium hot.

This is necessary because the energy that is used to heat the plasma to fusion conditions will leak through the magnetic field.

Once the helium has given up its fusion energy to the plasma, it is removed by a ‘diverter’ (the brown section at the bottom of the plasma containing chamber) as waste exhaust.

The other four-fifths of the fusion energy is carried by the neutrons. These are uncharged so can escape the magnetic fields to be captured by ‘breeding blanket’ structures.

These breeding blankets are complex pieces of technology that must be designed to both captures the neutrons, convert their energy to heat for electricity production, and react the neutrons with lithium to produce the tritium required to sustain the fusion reactions in a commercial reactor.

How do we create energy?

So, how do we get electricity? Ultimately, we just use the heat generated in the reaction to drive a steam turbine, just like in a coal or gas power station. An amazingly traditional end to high-tech technology!

The eventual aim is to design tokamaks that can be run continually, with fuel being topped up, and helium by-products being constantly extracted via the diverter. We’re not quite there yet!