The Principles of Quantum Mechanics

Learn more about the principles of quantum mechanics. 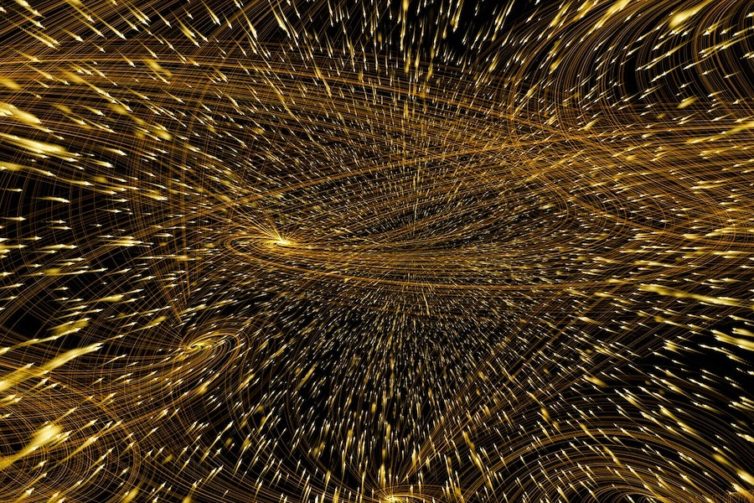 In this article, you will learn more about the principles of quantum mechanics.

We can see this when we observe light traveling through a prism. 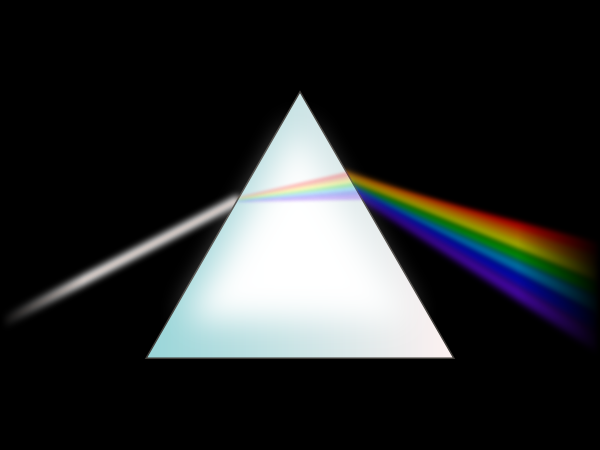 The light is refracted as it enters and leaves prism, and the amount of refraction depends on the wavelength (i.e. the colour) of the light – a wave property. Broad-spectrum white light is therefore broken into its different colours by the prism, giving us a rainbow.

However, when you actually see the light, the different colour receptors in your eye are sensitive to different wavelengths (or colours) specifically because of the particle nature of light. Light carries energy in packets, called quanta. This is why we call this quantum physics. Different wavelengths of light carry different energy quanta in each light particle (so-called photons). In your eye, different receptors are optimised to absorb different sizes of these energy quanta using different electron transitions in the molecules in the receptors. This means that we can only distinguish between the different colours because the different photons carry different amounts of energy – a particle property.

We can also see wave-particle duality in the behaviour of objects that we would usually consider to be particles, such as electrons (as we saw in electron microscopy last week). Perhaps the most famous demonstration is the so-called double-slit experiment. In this experiment, a wave is directed towards two slits. The two waves emerging after the slits can either add up or subtract, depending on whether a peak meets a peak or a peak meets a trough. This creates what is called an interference pattern: a pattern of bright and dark lines for light, or a pattern of high and low amplitudes for water or sound. We saw this briefly last week when we looked at photonic nanostructures. This is shown below: 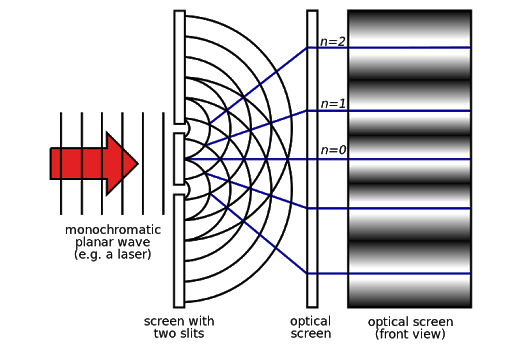 The same has also been shown for particles, through experiments with anything from electrons to large molecules. The resulting interference pattern shows that the electrons are travelling as a wave:

We can even see the same result when we send just one electron towards the slits! This occurs because the electron’s state – called its wave function – is a combination of two different wave states. This is called a superposition. If there is no way of knowing which slit the particle has gone through, it will actually have gone through both slits at the same time. The electron can interfere with itself to create the banded interference pattern. We see the same effect when sending a single photon, or even bigger molecules. However, no one has yet succeeded in sending bacteria, or anything more complicated, through a double-slit experiment.

The experiment result can be altered, however, if we take a measurement. If we measure which slit the electron passes through, we are said to collapse the wave function. This means that the electron is no longer in a superposition and cannot interfere with itself. Therefore, we no longer see an interference pattern, just a point where the electron hits the screen. This is another important principle in quantum mechanics – taking a measurement always affects the system.

In the following parts of this course, we will explore how superposition and the role of measurement can be utilised for practical applications. We will also discuss an interesting twist on superposition: so-called entanglement. If you entangle the wave nature of two different particles, the information you gain by measuring one particle constrains the properties or behaviour of the other particle. For example, suppose you have two particles, both in a superposition of being red and blue, and where you know that if one particle is red, the other must be blue. We can take these particles as far away from each other as we like, but as soon as we measure the colour of one particle, we fix the colour of the other particle. Einstein called this ‘spooky action at a distance’ and he is by no means the only physicist to think that quantum mechanics leads to some very strange consequences. It is famously said that no-one actually understands quantum mechanics but, as we hope you will see over the remainder of this week, this doesn’t mean that we cannot use quantum physics to design new and innovative technologies.