Read this article to learn about key concepts and terminology relating to gender and inclusion, including gender neutral terms. 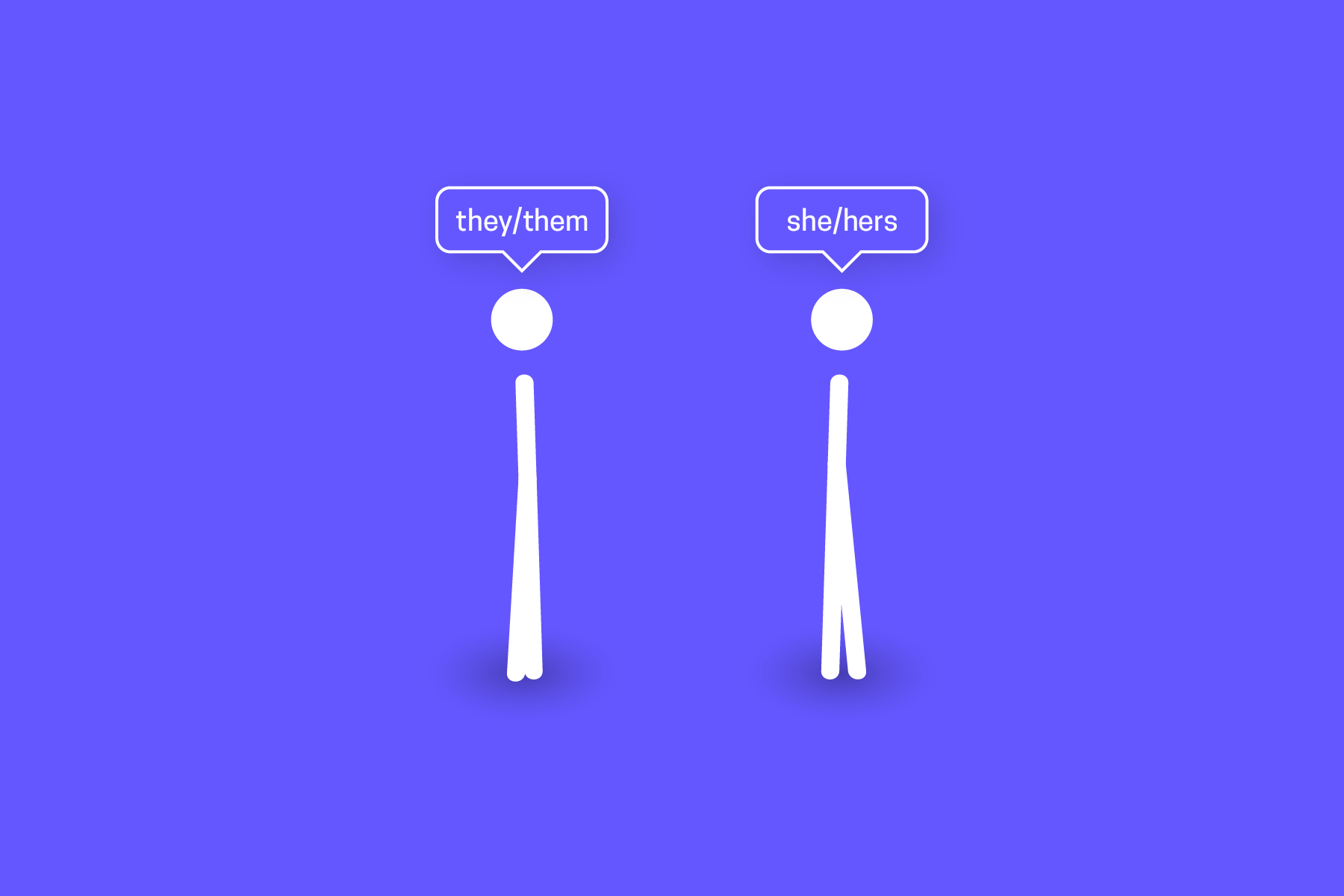 When beginning to develop gender-inclusive technologies, considering the language we use is one of the first places we can practice inclusivity.

To understand the complexity of language related to gender, it’s helpful to understand that gender is separate from biological sex. ‘Sex’ refers to the biological aspects of an individual as determined by their anatomy, which is produced by their chromosomes and hormones. While we commonly understand sex to be defined in the binary categories of ‘male’ and ‘female’, it can also be understood as being ‘non-binary’ as some people can be intersex and because of the ways in which sex develops (1).

Unlike ‘sex’, ‘gender’ can be understood as a social construct relating to our behaviours and attributes based on ideas of masculinity and femininity. Gender identity is personally defined and exists on a spectrum. Some people find their gender identity to be fixed at one point on the spectrum, relating to the sex they were assigned at birth, such as someone who is assigned female at birth and identifies as female. Others might experience gender to be more fluid, moving away from the sex they were assigned at birth (2). The idea of gender being binary is a predominantly Western construct with other cultures recognising genders beyond male and female, such as two-spirited people in Native America or Kathoey people in Thailand (3).

Language is complex and people have different ways of referring to themselves, such as with gender pronouns. The pronouns people use correspond to their gender identity – for example, ‘she’ for someone who identifies as female. Non-binary people may prefer to use more than one set of pronouns, such as ‘he’, ‘she’ or ‘they’ depending on how they identify.

You may not understand all genders or pronouns, but it is important for all individuals to receive equal respect regarding the language that is used to refer to them. Gender is a self-defined part of people’s identity – an understanding which allows us to be fully inclusive of trans people.

Now, we’d like to run through some of the terminologies and in some instances suggest alternatives that you might prefer.

This term refers to an individual whose sense of personal identity and gender corresponds with their sex assigned at birth. The prefix ‘cis’ simply means “on the same side as”.

Transgender people are people whose gender identity is different from the gender they were thought to be at birth. “Trans” is often used as shorthand for transgender. Trans people may fall within a binary gender (woman or man), or be non-binary and not fit within either of these two categories. While some trans people choose to medically transition from the sex they were assigned at birth this is not a requirement of being trans. Transition for some trans people might mean simply occupying the gender they identify with through their appearance and actions.

Non-binary people are individuals whose gender identity falls between or outside male and female categories. Some non-binary individuals have an experience of gender that blends elements of being masculine or feminine, while others have an experience of gender that exists outside of being masculine or feminine entirely. Some people don’t identify with any gender while others gender changes over time. Non-binary is not a fixed category but one that is inclusive of a range of identities.

As mentioned previously gender pronouns are used to describe someone’s gender identity, either when they are referring to themselves or when they are being referred to. There are many gender pronouns that people choose to use but common ones are she/her, he/his and they/them (4). While she/her and he/his are commonly associated with female/feminine and male/masculine, labels such as this should try to be avoided as not everyone who uses she feels female or feminine for example. They/them on the other hand has become commonly adopted as a gender-neutral pronoun, allowing people to describe themselves without explicitly associating gender with their identity. While these are the most commonly used pronouns there are many more pronouns that people might choose to use, and some people may choose to use more than one (5).

Misogyny is the active contempt of women and femininity. Women experience misogyny in varying degrees across many aspects of their lives. Misogyny is used to describe the societal inequalities created by things such as the gender pay gap, the harassment of women in the workplace and the ways in which women are treated and objectified in the media. While all women experience misogyny it’s important to understand that trans women experience misogyny differently from cisgender women. Trans women and feminine presenting trans people experience misogyny because of the way appear as well as being discriminated against because of the perception that they have “given up one’s position as a (biological) man” in society which poses a “fundamental threat to male superiority and may be seen as a rejection of the “superior male identity.” This phenomenon is known as transmisogyny (6)

Misandry is the active contempt of men and masculinity. Misandry can come in many forms from prejudice towards the male gender, to sexual objectification, social exclusion and violence against men.

In recent years some people have adopted the use of the word “womxn” as a way to explicitly include or foreground transgender women and nonbinary people in their language. The term was widely adopted in feminist spaces but has recently been subject to criticism as a contested term for trans inclusion, with some arguing that it implies that trans women exist separately from cis-gender women (7). Our use of women is fully inclusive of trans women.

This term was coined by Yasmin Gunaratnam in 2003 (8). It conveys that people are actively minoritised by other people and dominant power structures rather than naturally existing as a minority in and of themselves. As an example, white people are in the global minority and people of colour are a global majority so calling people of colour a “minority” reinforces the idea that whiteness is the default lens through the world must be seen. The terms ‘minority’ or ‘marginalised’ are contested as they can be seen to be discriminatory, equating those in question with being less than or existing on the outside of the majority.

Tokenism is the practice of making a symbolic effort to be inclusive of minoritised individuals, most specifically to give the appearance of racial or sexual equality. It is usually done as a way of deterring accusations of discrimination by giving the impression of inclusivity and diversity. People are often tokenised in the media, for example, the inclusion of a singular person of colour in a panel discussion or as a cast member in film and television shows. Kristen Martinez defines tokenism as “when you see a person with a marginalised identity who is acting solely as a seat-filler to appease folks who want more diversity and accurate representation” (9).

People often use the term ‘users’ to describe these groups, but the term ‘user’ itself can be seen as problematic as it positions a person’s use of a product or service above other aspects of their lived reality and doesn’t acknowledge their potential for active participation in the production of technologies. We prefer the term stakeholders as it emphasises the idea that we all have a stake in the technologies we use, and are active participants in constructing their social meaning and value. Feel free to use ‘user’ if it is your preference, alternatively, you can simply use ‘person’ or ‘people’.

Intersectionality is a framework for understanding how different facets of someone’s identity overlap to create varying degrees of discrimination and privilege. The term was coined by African-American lawyer Kimberlé Crenshaw in 1989 and has become widely adopted in broader culture.