What is a visual field?

In this article we introduce the concept of the visual field and explain what we mean by typical visual field defects in glaucoma. 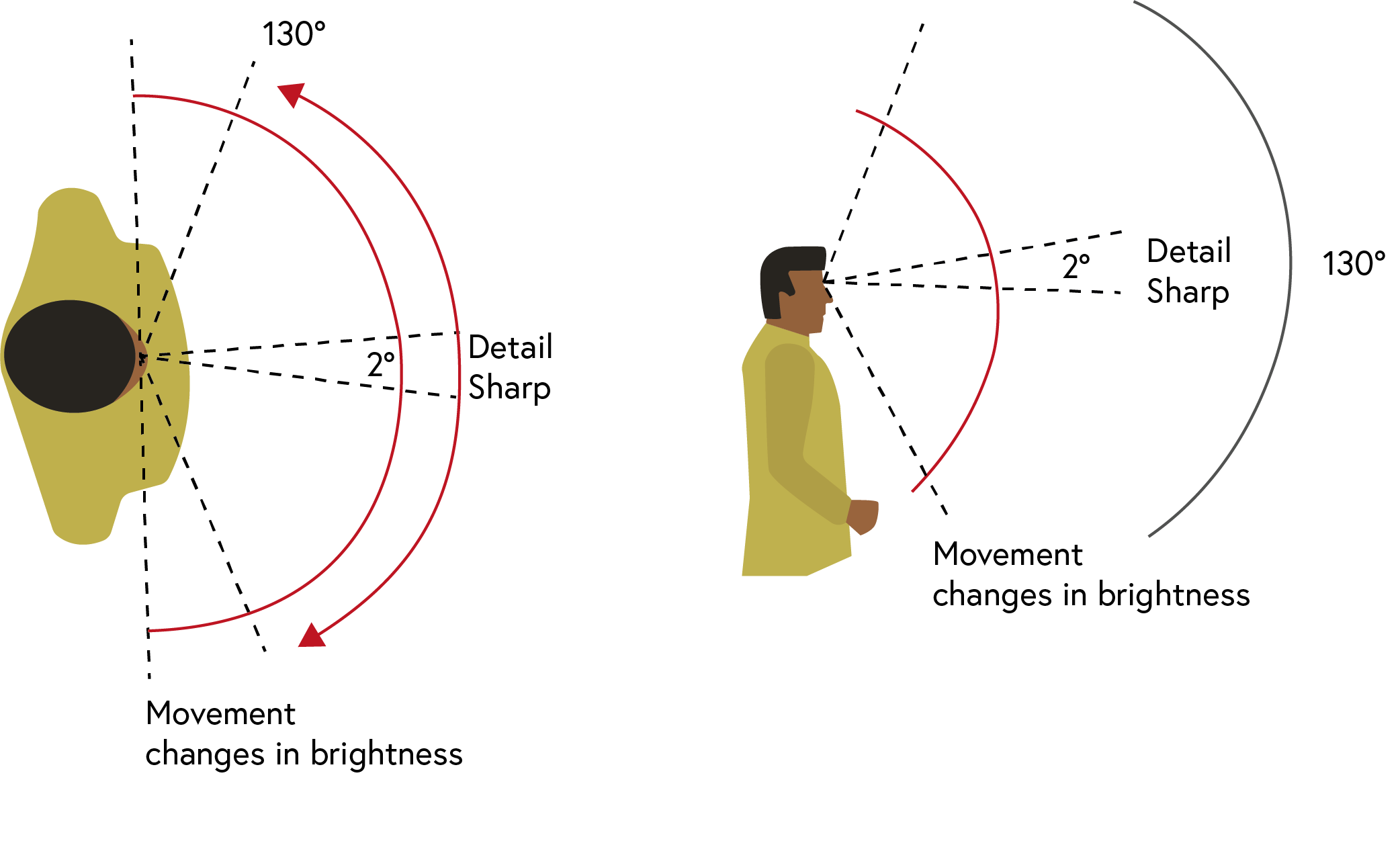 The visual field is the entire area (field of vision) that a person can see when both eyes are focused on a single point, straight ahead and includes what can be seen above, below, and to either side of the point the eyes are focused on. Vision is typically sharpest in the middle of the visual field. Perimetry is the examination of visual field function and is an integral part of any ophthalmic evaluation.

The visual field (VF) is represented as a three-dimensional cone (Traquair’s island of vision). The apex corresponds to the fovea (fixation point during testing) which has the highest sensitivity to light. The base of the cone corresponds to the area of lowest sensitivity to light. The purpose of visual field testing is to define the topography of the “cone” to recognise any variation from ‘normal’.

The plotted VF (the base of the cone) extends for approximately 60° superiorally, inferiorally and nasally and 100° temporally. 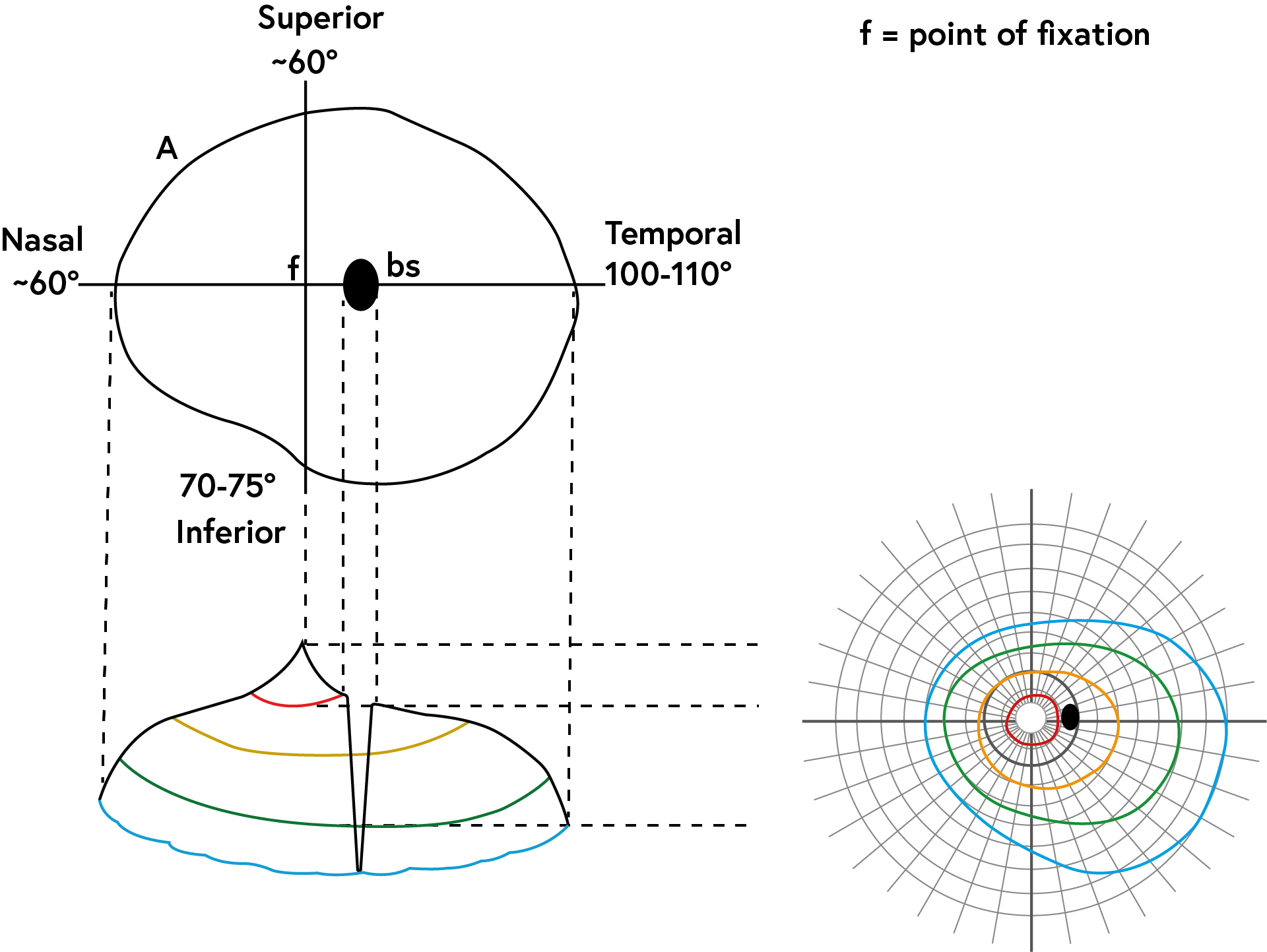 A ‘blind spot’ (labelled ‘bs’ in Figure 1) is the term used when the scotoma is absolute and is also located at the same position as the optic nerve head (approximately 15° temporal to the fovea).

The damage that occurs due to glaucoma follows the nerve fibre arrangement in the retina (Figure 2). 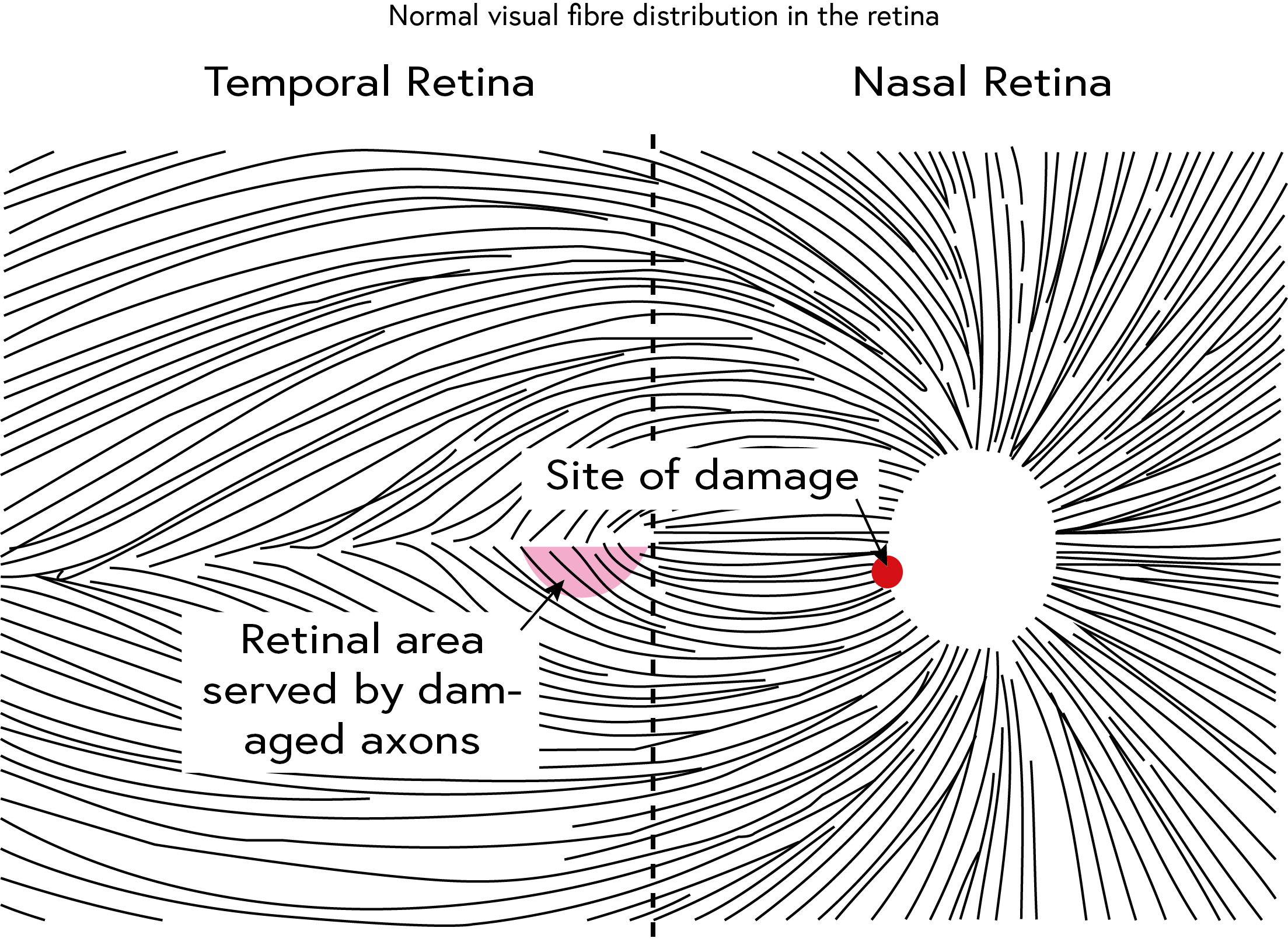 Fibres that are damaged in any part of the retina (shown in pink) will have a corresponding change in the optic nerve head where all the fibres converge, this is referred to as the RNFL pattern). Glaucomatous damage typically follows the arcuate (curved) RNFL pattern. Fibres stop at the horizontal ‘raphe’ (seen as a nasal step in visual field testing).

Exploring the central visual field will reveal almost any pathology in the visual pathway, this is because the central VF (30° around the point of fixation) reflects the function of approximately 66% of the retinal ganglion cells, and its cortical representation occupies 83% of the visual cortex.

Asymmetrical visual field loss in glaucoma can lead to late presentation as with both eyes open the patient sees no defect. Visual Field testing

Visual field loss can be diffuse (as with cataract or corneal opacification), but more commonly there are isolated defects. The visual field defects associated with glaucoma appear to be fairly non-specific, although typical loss fits with the arrangement of the retinal ganglion cell axons within the retinal nerve fibre layer of the retina. 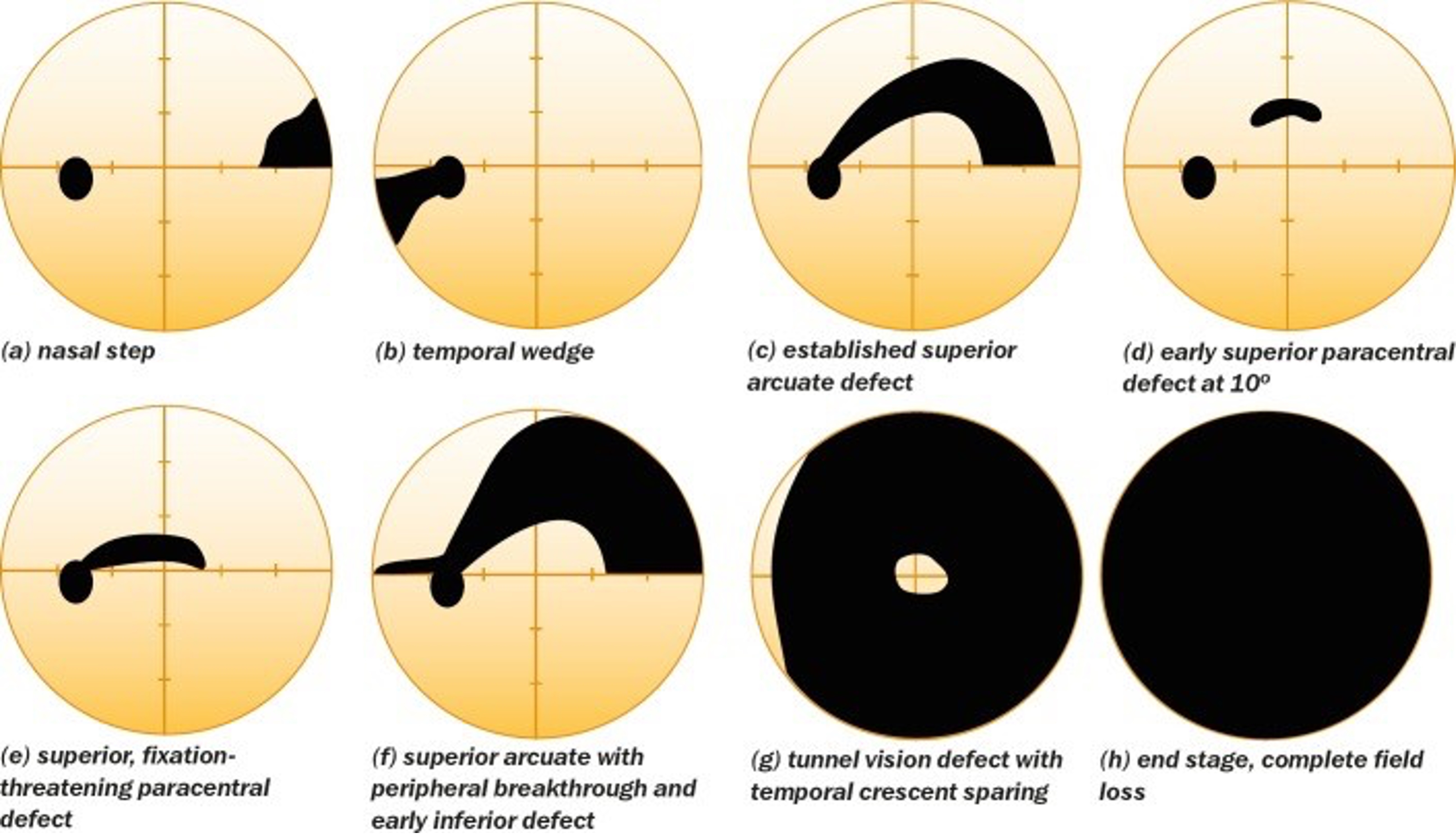 The concept of visual field testing has been documented since the 2nd century but the technology and methods for modern perimetry was developed rapidly during the second half of the 20th Century.

Perimetry is the systematic measurement of visual field function (the total area where objects can be seen in the peripheral vision while the eye is focused on a central point).

The TWO most commonly used types of perimetry are:

1. Kinetic perimetry – this involves using test objects (fixed in size and brightness) which are moved from non-seeing to seeing parts of the visual field. The patient is required to indicate when the object becomes visible. The results are plotted on isopters, which are lines of equal differential light sensitivity.

A Goldmann visual field analyser (or perimeter) is a device that enables kinetic visual field testing and generates a permanent record of the visual field, making it a sensitive and reproducible technique, ideal for detecting change over time.

The Goldmann perimeter consists of an illuminated hemispheric bowl upon which target spots of light are shone and moved from non-seeing regions to seeing regions. During static testing, the test target can be projected at a single location and the brightness of the target object is increased until the patient responds to indicate that they have seen the target. The Goldmann device allows control of the luminance (the amount of light that is emitted from, passed through, or reflected off an object) of both the background and stimulus targets and it is important that the device is calibrated on a regular basis to ensure that individual visual field plots can be compared with others.

Automated visual field analysers have been developed, but these are expensive and are not yet available worldwide. However, research has shown that glaucomatous visual field loss is best detected and is managed with high reliability when automated perimetry is performed. SAP machines are highly technical and require a trained person to undertake visual field testing.

You can watch this video if you wish to understand more about visual field changes in glaucoma: Visual Field changes

How to interpret visual field loss using this method is explained in the next step (Step 2.09)

As you read this article reflect on the likely functional challenges faced by patients with glaucoma when they have loss of: