Read about the concept of reducing water demand by domestic consumers as one way of strengthening water security.
© Cardiff University

In this activity, we introduce the concept of reducing water demand by domestic consumers as one way of strengthening water security.

We’ll do this through the example of Cape Town, South Africa, and some examples from other places around the world. The aim is that you gain an understanding of how water behaviour can have a strong impact on water security.

After completing this activity you should think more critically about:

How much water do we use?

The amount of water we use for domestic purposes is closely related to its availability, the amount of effort it takes to access it and the level income we have.

Where water is plentiful and comes out of a tap in our house then we tend to use more of it, with those on higher incomes tending to use the most. Those living in hot and arid climates also tend to have a higher demand for water, all other things being equal.

A surprising amount of water supplied (figures of one third are not unusual) is lost through leakage before it even reaches the consumer.

The most significant reason for differences in average water use though tends to be income related. Those with lower levels of income tend to use less water.

This graph illustrates this with an example from Windhoek, Namibia, demonstrating the divergence from the average based on a survey undertaken in 2010. 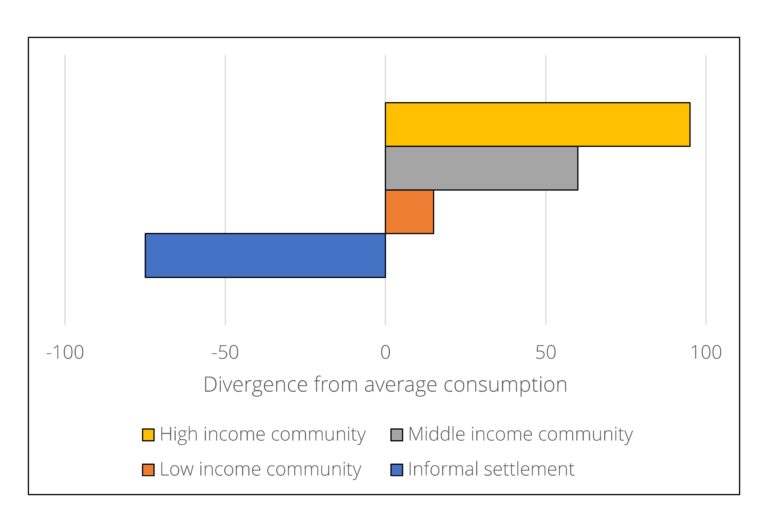 Variations in average amount of water used by households (%)

The reasons for such differences are related to lifestyle as well as the availability and cost of water. Watering a garden or washing a car takes a lot of water, and in the house itself things like using a washing machine will also add to the total amount of water used.

For most households, simple actions like flushing a toilet or taking baths and showers can rapidly add to the amount of water being used.

This table shows some estimates by one Australian water council of the typical amounts of water required by simple household activities.

Many of these activities will be spread over a number of days, or across a family. However, the table indicates how much water consumption can be affected by just a few common actions.

In the next step, we’ll illustrate this with a recent example from Cape Town, South Africa.