Here’s Adam Goodlad, the Eden Project’s resident banana expert, to explain the background and highlight the key issues at play with bananas.
View transcript
0.5
Bananas– we all know bananas, right? They grow on trees. They’re yellow. And the world could probably live without them. They’re just a tasty snack. Actually, most of those facts are actually incorrect. It is actually the world’s largest herb. It’s not a tree at all. And actually, bananas are one of the most important crops in the world. Also, yes, they can be yellow. But they come in a range of colours. There’s actually a blue banana that comes from Hawaii, a pink one that peels itself when it’s ripe. There’s round ones. There’s two foot long ones, orange ones that are juicy inside. There’s actually a massive diversity. What we assume is because what we see on supermarkets.
37.6
In America, they eat more bananas than apples and oranges combined despite actually being able to grow apples and oranges in America. Wild bananas actually have seeds making them inedible. They’re actually very small and full of rock hard seeds that will break your teeth. So the large, fleshy, edible bananas that we know of– the Cavendish banana, the yellow banana– are actually unnatural. It has come about naturally. But essentially, thousands of years ago in the jungles, the wild seeded fruit hybridised creating a triploid banana. Now, naturally, things are diploid. They have two sets of chromosomes. And when subspecies of musa acuminata, the ancestral banana hybridised, the offspring was triploid. It’s a bit like a horse and a donkey.
86.4
They can reproduce, but their offspring cannot. And this is because of having an uneven number of chromosomes. The significance of these bananas being sterile triploids– when they grow these in agriculture, they actually have to grow them vegetatively from cuttings or, on a more industrial scale, from tissue culture. This means that every plant is genetically identical. You talk about a monoculture, just one variety, with it a lack of genetic diversity. It’s taken to a next level when they’re all clones. And this brings with it several challenges. And one of the main problems here is pest and disease. If a pest arrives that affects one banana, it affects them all because they’re all clones.
126.2
One disease alone, Black Sigatoka requires 50 aerial spraying of fungicide a year. These are known carcinogenic fungicides. Their workers are getting exposed to these. This is contaminating the soil and all the waterways, so far from sustainable. The threats posed by banana diseases is actually a story of history repeating itself. The previous export cultivar, the Gros Michel, was actually hit by a disease called Panama disease, which made it eradicated from the plantations. Now, there’s a new strain of Panama disease called Tropical Race 4, which is actually spreading around the world. As soon as this reaches the vast plantations of Latin America, bananageddon will be upon us. The implications of bananageddon go beyond the plantations of Latin America.
170.2
Half a billion people rely on bananas for half of their daily calories. In Uganda, which has the highest consumption of bananas on Earth, the word for their type of cooking banana, a plantain, matoke, is synonymous with the word for food. Spraying aerial fungicides 50 times a year is pretty far from sustainable. So what are the solutions? You can actually conventionally breed bananas. But it’s very, very tricky. There have been some limited success. But coming up with one that’s commercially viable is incredibly hard. Other things that are being researched is induced mutations– you can do things to bananas to make a nonsexual mutation more likely. Some of these confer disease resistance. We actually have one just here, musa formosana.
211.9
So along with conventional breeding, induced mutation, and genetic modification– all being genetic engineering of some sort– these are all technological fixes. And what we’re actually dealing with here is trying to treat the symptoms rather than the root causes. Perhaps, what we should be looking to doing is actually changing the supply chain and the food production system itself.

In this section we use the growth and consumption of bananas to highlight how our demand for a single crop has led to intensive land use, monoculture and pollution. The result is a species of crop that has now become common-placed in our shops but could be on the edge of extinction.

We’re just mad for bananas! The fruit that’s actually a berry grown on a giant jungle herb has become a staple in our diets globally and, for the major growers and exporters, a commodity upon which their economies are built.

Adam Goodlad, the Eden Project’s resident banana expert is here to explain the background and highlight the key issues at play when considering the global demand for bananas. 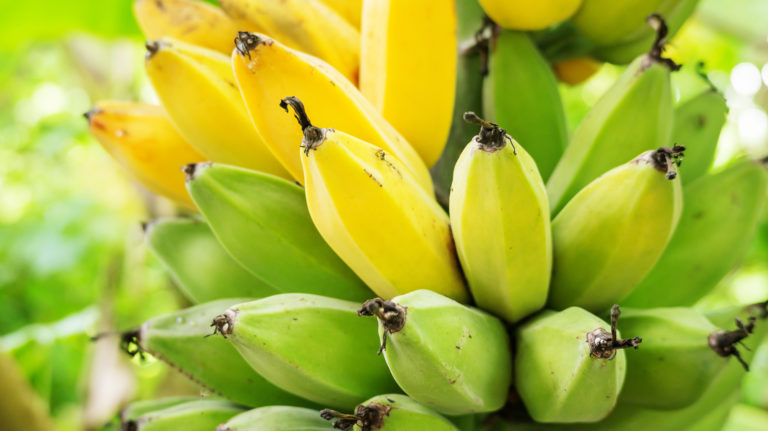 How many bananas have you eaten in the last month?

The biggest importers by far are Europe and America where the sale of bananas is an excellent example of a ‘push system’ whereby huge consumer demand drives the expectation that bananas will be stocked in every supermarket and fruit and vegetable shop we visit.

The ‘banana barons’ of the early 1900’s started the global banana industry in Latin America and quickly realised that the most profitable business plan involved selling as many bananas as possible at very low cost. To keep costs down they paid their workers very low wages to farm land bought very cheaply, all the time farming and processing bananas in a highly industrialised monoculture. This trade was very profitable for the big American Banana companies whose wealth made them highly influential. In fact, there is evidence to suggest that the United Fruit Company used its influence on the CIA to start the 1954 Guatemalan military coup and overthrow a democratically elected president who wanted to introduce a minimum wage and reclaim disused plantation land!

Power struggles aside however, the method by which the global demand for bananas is met today is a highly relevant and interesting case study for sustainability.

The intensive monoculture of Cavendish clones (due to sterility, every Cavendish grown is a clone!) requires synthetic fertilisers, herbicide and heavy pesticide application. Bananas, and particularly export bananas, are a chemically intensive crop [1]. This is reflected in the numerous health issues of the workers and the contamination of the environment. An attempt to keep up with banana diseases has also led to extensive deforestation and even changed local rainfall patterns.

You can see from the map below that India, parts of South America and Southeast Asia are the largest producers of bananas and so play an important role in this global sustainability story.

The sustainability of banana production could have far more serious consequences than simply affecting consumer choice. There are communities all over the world where bananas are a crucial component of the daily nutritional requirements. In fact, an estimated half a billion people rely on bananas for half their daily calories. In Uganda the word for banana ‘matooke’ also translates to ‘food’. What would be the consequence then of this fruit being no longer available because of an increased prevalence of disease or pests or decreased soil fertility and rainfall? The threats to our current mass production of the Cavendish banana seem small in comparison to those where communities would face malnourishment and food insecurity without banana stocks.

This is now becoming a very real possibility as ‘Tropical Race 4’ is currently spreading round the world. This is a new strain of the original Panama disease-causing fungus that destroyed the Cavendish predecessor, the ‘Gros Michael’ is currently spreading round the world. With no fungicide that can treat it, this disease could spell ‘bananageddon!’ for the big banana exporters as well as further threatening local banana production and food security.

One way to tackle this problem is to move away from a monoculture production system, use integrated pest management and embrace a variety of cultivars, some with disease resistance. Indeed, approaches that are showing promise to date include both conventional breeding and genetic modification for disease resistance. Where the availability of banana crops is crucial for food security organisations such as the ProMusa project are educating local people and raising awareness in order to prevent malnourishment.

See the related links at the bottom of this page for more information on this fascinating topic and support your learning.