How to Grow Plants From Your Cuttings

David Hurrion takes you through some gardening basics and teaches you how to propagate house plants from stem cuttings. 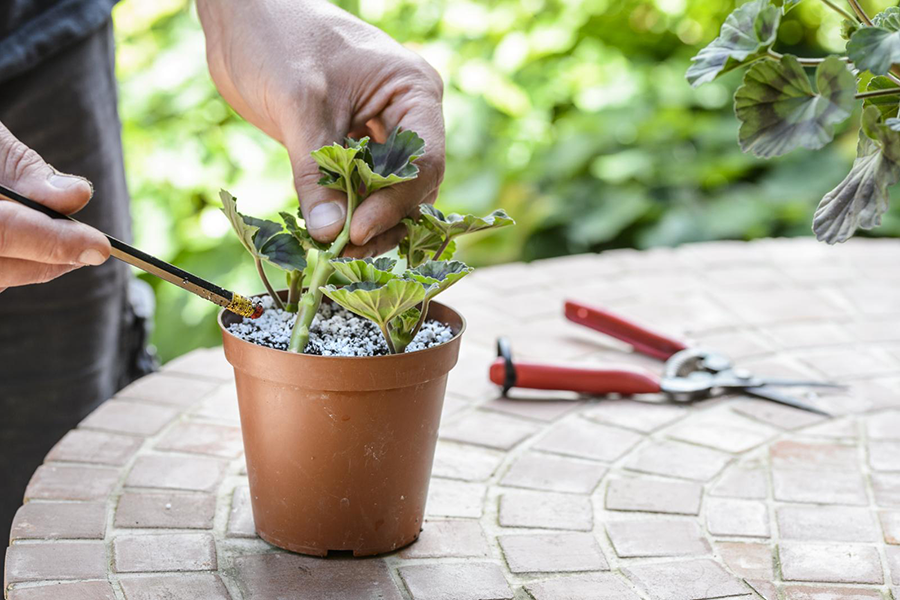 The beauty of taking cuttings from your house plants is that you will know that the new plants will share all the characteristics of the original or ‘parent’ plant. If the plant has red flowers – like a particular variety of pelargonium for example – then the cutting, once rooted, will have red flowers too, as well as sharing the same leaf shape, plant height and form. As we’ve already seen, if plants are raised from seed then they will be different from the parent plant.

Not all house plants can be propagated from cuttings, however. Clump-forming perennial species, for example, will need to be divided to create new plants or in some cases propagated from leaf cuttings. We’ll look at these later in this activity.

Those house plants which produce distinct stems can, for the most part, be replicated by taking advantage of their potential to produce roots at their nodal points. These are the slightly swollen points on the stem where the leaves are, or were, attached. They are sometimes referred to as leaf joints. When propagating house plants, stem cuttings fall into two distinct sorts – soft stem cuttings and woody stem cuttings. 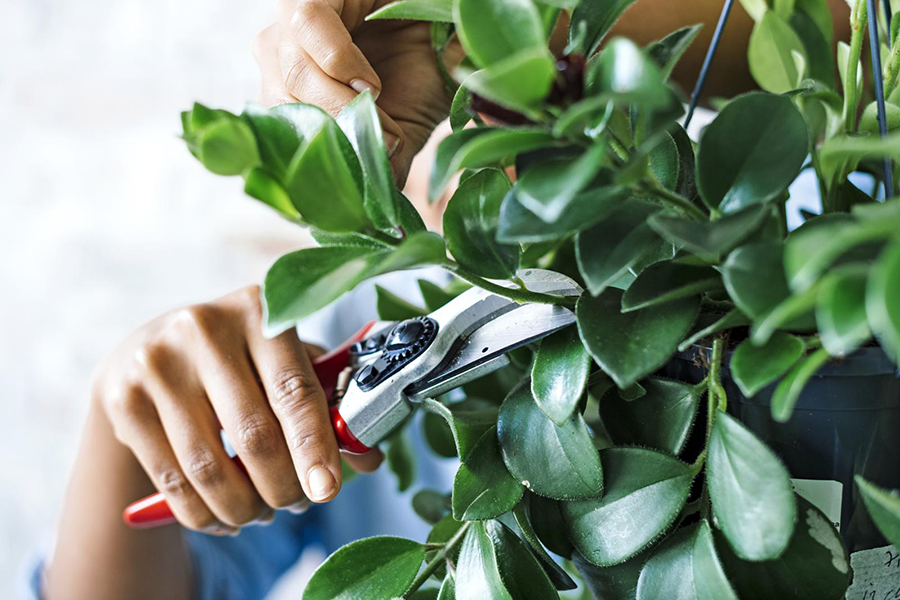 Detach stem material by taking more than you need and cutting just above a leaf node or joint on the parent plant. The plant shown here is Aeschyanthus ‘Mona Lisa’. ©BBC Gardeners’ World Magazine

When selecting material from house plants to make cuttings from it’s important to bear the following in mind:

In all cases the cutting needs to have a node at the top and one at the bottom so that the tissues can seal up effectively. Cuttings then need to be able to first produce a scab-like ‘callus’ at the lower cut end, before roots emerge.

The callus stops the end of the stem from rotting. Where cuttings are taken from soft stems, this callus formation can occur very quickly – in a matter of a week – and then roots will follow quickly, a further 1-2 weeks later. Firm, woody stem cuttings (see below) can take up to around 12 weeks to root.

Rooting is promoted by the plant’s own natural rooting hormones. Artificial hormone rooting powders and liquids are commercially available, but well-made cuttings of house plants shouldn’t need them. Wrongly used, these rooting hormone treatments can suppress rather than promote rooting. 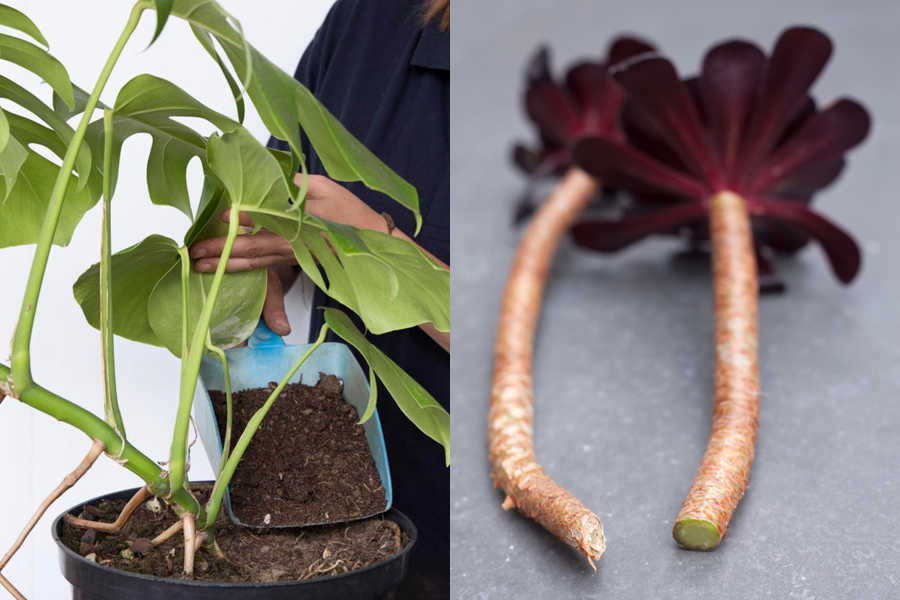 The stem of the Swiss cheese plant (left) has wide gaps between the leaves, while the aeonium (right) shows many scars on the stem where leaves were attached to the closely packed nodal points. ©BBC Gardeners’ World Magazine

There’s such a wide variety of different house plants from all parts of the world, that their stems and leaf attachments vary hugely. Compare the lush, vigorous green stems of a Swiss cheese plant (Monstera deliciosa) and their large, long-stalked leaves, with the rubbery stems and succulent leaves of an Aeonium. Both have readily identifiable stems and leaves, but they are structurally quite different.

Cuttings that are taken from these different types of soft stems need to vary in size according to the space between the nodes (leaf joints). On the Monstera, a cutting would consist of two nodes, with the leaf detached from the lower one. The Aeonium, however, might be take from a similar length of stem – say in this case around 10cm – but it would be composed of in excess of 20 nodes, all closely packed together, from which the leaves are likely to have already fallen, with a tuft of leaves just attached to the top of the stem.

The length and approximate number of nodes will vary widely, therefore, depending on the type of plant you are taking cuttings from. This means they can vary from 4-10cm in length. Visit gardenersworld.com for more detailed tips on taking soft stem cuttings from specific plants.

Such soft stem cuttings of house plants can be taken any time during the growing season. In temperate parts this means in late spring, summer and early autumn as this is when natural light levels will be high, encouraging the cuttings to root quickly.

Soft stems cuttings are best rooted in an equal-parts mix (by volume) of compost and perlite (or sharp horticultural grit). Soak the compost thoroughly before inserting the cutting. They are best put in a bright place to root, but out of direct sunlight. The cuttings and the compost can be misted with water to prevent them and the compost from drying out. Small cuttings can be cover with a clear polythene bag or place in an unheated propagator to root.

Alternatively, you may find that some tropical house plant such as Aglaonema, Dieffenbachia and Monstera will root in a jar of water. 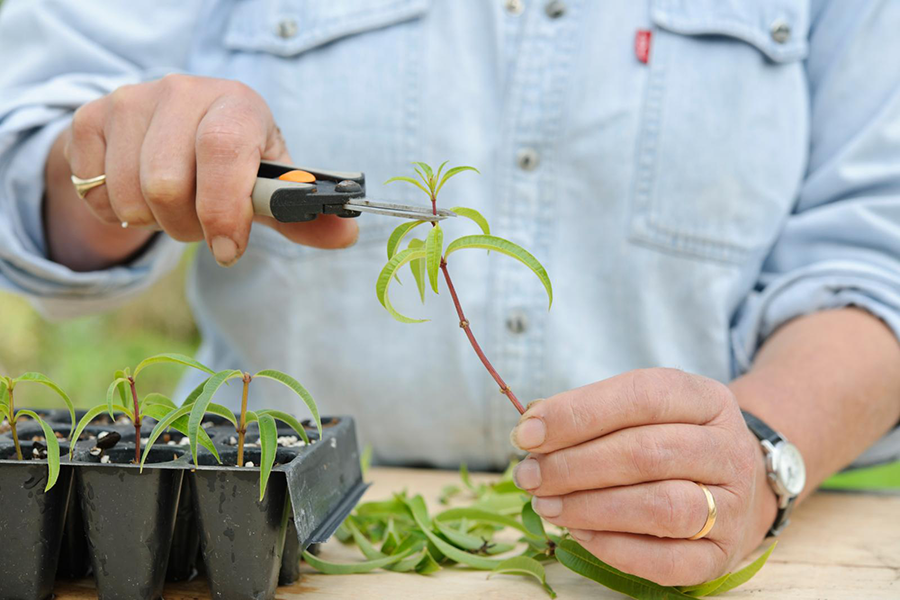 Plants which make woody stems, like this lemon verbena (Aloysia citriodora), are best taken as semi-ripe cuttings as the stems start to harden up in mid to late summer, but before the day length decreases too much in autumn. ©BBC Gardeners’ World Magazine

When it comes to house plant that produce woody stems, cuttings are best take when the new growth has started to toughen up. At this stage the leaves will also be less prone to wilting when detached from the parent plant. The cutting are made from side shoots and tip growths that grew earlier in the growing season. The tips of the shoots may still be soft, flexible and it is best to remove this as it is likely to wilt. This type of cutting is suitable for weeping fig (Ficus benjamina) and various form of citrus.

Rooting can take up to 12 weeks so it is important to keep the compost moist to keep the cuttings alive. They can be covered with an inverted, clear polythene bag or place in propagator to root. Heated propagators should not be necessary for the majority of plant cuttings if they are taken well.