Stone artefacts recovered in Liang Bua from the time that Homo floresiensis lived show evidence of tool-making techniques and resources.
© University of Wollongong

What do stone artefacts reveal about the life and times of the Hobbit?

Stone artefacts recovered from the Homo floresiensis layers at Liang Bua show evidence of tool-making techniques and the resources used. 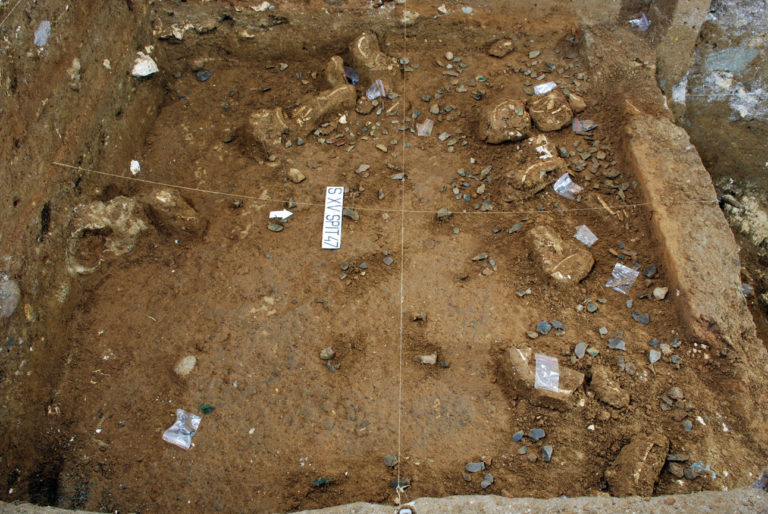 The artefacts were produced through hammer percussion, with volcanic river cobbles as hammers. The hammerstones recovered from the excavation are small, oblong in shape, and contain well-defined ends with pitting marks caused by percussion. The artefact assemblage contains numerous ‘flake cores’, that is, larger flakes that have been subsequently knapped to produce smaller flakes. This suggests that the Liang Bua hominins likely produced larger flakes elsewhere, perhaps closer to the stone sources, and subsequently transported them to the cave, where they were knapped to produce smaller flakes.

The artefacts at Liang Bua were knapped through techniques of freehand percussion, burination, truncation, and bipolar percussion. Freehand percussion is a technique where the knapped stone is held stable in one hand, while the other hand holds the hammer that delivers the percussion. With burination, the knapper strikes flakes off the edge of the stone, which tends to produce elongated flakes with a roughly triangular cross-section. Truncation involves placing a flake on an anvil and striking the flake surface with the hammer. This process results in the shattering of the knapped flake into two or more fragments. In contrast to truncation, with the bipolar technique flakes are placed on an anvil and hammer blows are delivered to the edge of the flake rather than to the face.

Evidence indicates that the stone knapping methods at Liang Bua remained relatively constant over time, which signals a level of stability in the technological behaviour of the local hominins. While stone artefacts produced by Homo floresiensis may appear ‘simple’ compared to lithics elsewhere (e.g. Europe, Asia, Africa), they were undoubtedly effective for human adaptation to the Flores environment over a considerable length of time. In fact, similarities between the Homo floresiensis artefacts at Liang Bua Pleistocene artefacts and those from a nearby older site (Mata Menge in the Soa Basin) suggest that the same stoneworking practices likely extend back to at least 840, 000 years ago on Flores.

The stone artefacts made by modern humans at Liang Bua show some continuity (particularly in knapping techniques) with those produced by Homo floresiensis. However, there are also some marked differences. The proportion of artefacts manufactured from fine-grain chert increases dramatically with the arrival of modern humans, and many of these chert flakes exhibit edge-gloss that were probably caused by cutting soft materials like grass. In addition, many more artefacts show signs of burning, although these may have been due to accidental exposure to fire, rather than intentional heating. These differences indicate that the modern humans and Homo floresiensis exhibited different behaviours in the ways that they used stone tools and other technological means, such as fire use by modern humans, to extract and process resources.