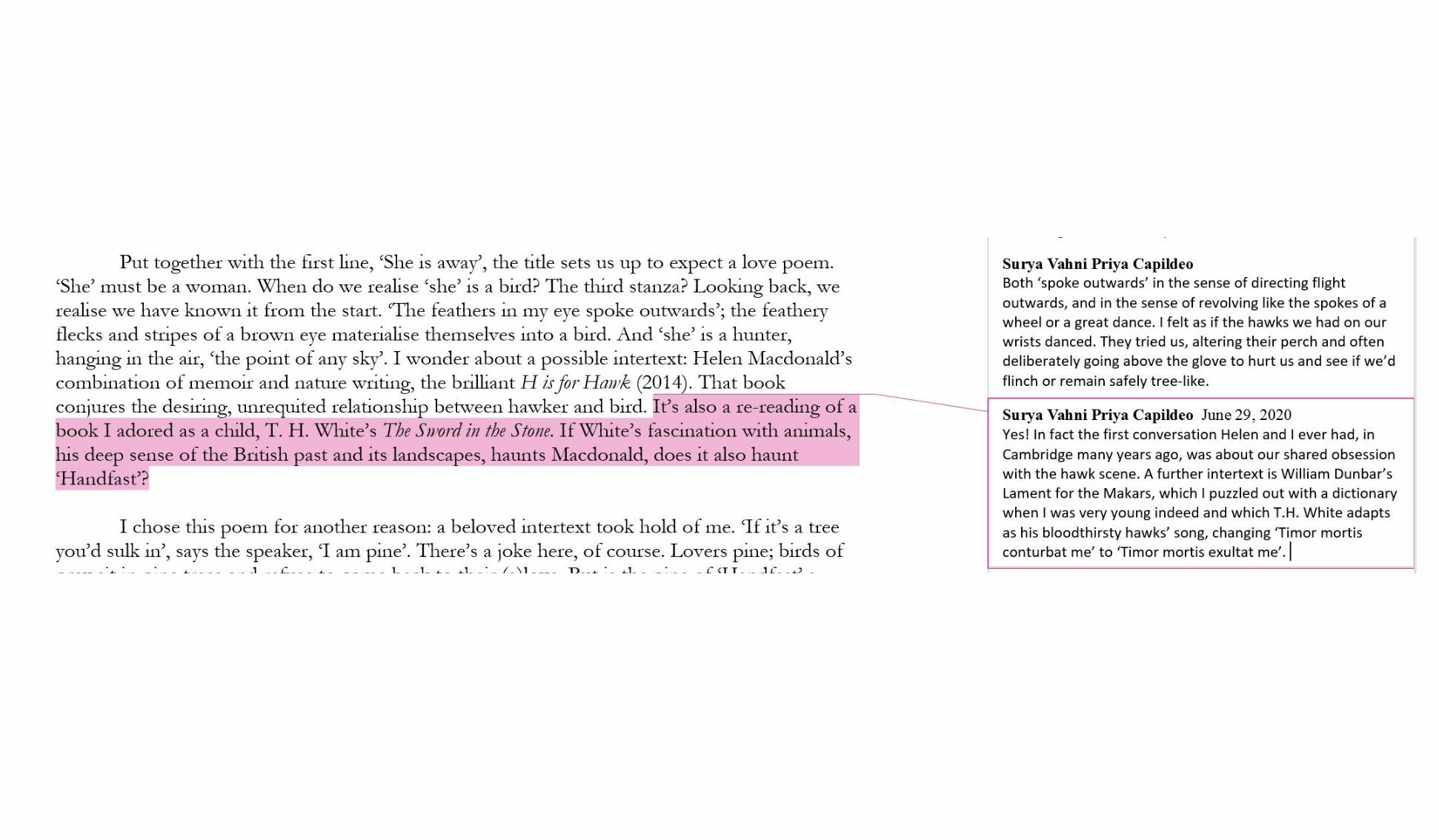 In this article, Professor Helen Smith discusses the intertexts of Vahni Capildeo’s poem, ‘Handfast’, from Capildeo’s collection Measures of Expatriation. In our Downloads section, you can find a full version of the image above, and you can hover over highlighted material to view Vahni’s comments on Helen’s piece. You’ll also find a full version of ‘Handfast’, reproduced by courtesy of Carcanet Press.

In what follows, I’m going to explore the intertexts of Vahni Capildeo’s ‘Handfast’, a poem dedicated to the children’s author KM Grant. I want to show how listening for echoes and allusions enriches our understanding, so I’ve used the intertexts I have spotted to show how I would begin to develop a critical reading of this wonderful poem.

Handfast is an ancient word, which describes a kind of private, preliminary marriage. Together with the first line, ‘She is away’, the title sets us up to expect a love poem. When do we realise ‘she’ is a bird, not a woman? Looking back, we realise we have known it from the first stanza. ‘The feathers in my eye spoke outwards’; the flecks and stripes of a brown eye transform into a bird. I wonder about a possible intertext: Helen Macdonald’s brilliant H is for Hawk (2014). That book conjures the desiring, unrequited relationship between hawker and bird. It’s also a re-reading of a book I adored as a child, T. H. White’s The Sword in the Stone. If White’s fascination with animals, his deep sense of the British past and its landscapes, haunts Macdonald, does it also haunt ‘Handfast’?

I chose to write about this poem because one of its intertexts called out to me. ‘If it’s a tree you’d sulk in’, says the speaker, ‘I am pine’. There’s a joke here. Lovers pine; birds of prey sit in pine trees and refuse to come back to their (g)love. But is the pine of ‘Handfast’ a Shakespearean tree?

In The Tempest we learn that when Prospero arrived on his island he found the spirit Ariel trapped in a ‘cloven pine’. I’m fascinated by Shakespeare’s elemental concerns: his recurring interest in earth, air, fire and water. In The Tempest, Ariel is forced by Prospero ‘To run upon the sharp wind of the north, / To do me business in the veins o’ the earth’. In ‘Handfast’, Capildeo also turns to the elements: ‘if earth, I’m risen terracotta; / if it’s all to air you’d turn, turn to me’. In these metamorphoses, does Capildeo, like Shakespeare, have Ovid in mind: the great, Roman poet of brutal love and changing shapes?

Capildeo’s tumescent terracotta also brings the Bible to mind. Shakespeare’s contemporaries knew that man was made of ‘brickle clay’. ‘Lo!’, says God, in Wycliffe’s translation of Jeremiah 18.6, ‘as clay is in the hand of a potter, so ye, the house of Israel, be in mine hand’.

The poem’s association with The Tempest started as a hunch, but I can back it up with Capildeo’s evident, recurring interest in Shakespeare. Three poems in Measures of Expatriation have Shakespearean titles: ‘Too Solid Flesh’ (Hamlet); ‘All Your Houses’ (Romeo and Juliet); and ‘Sycorax Whoops’ (the witch from The Tempest, Caliban’s mother).

I’m interested in how both Shakespeare’s play and Capildeo’s poem expand our mental maps. The Tempest is set on an island, probably in the Bermudas. But it also explores the literary and cultural landscape of the Mediterranean, taking in Italy, Tunisia, Arabia, and the travellers’ tales that were so popular in Shakespeare’s day. Capildeo’s poem imagines a similarly far-flung worldscape condensed in the blood and feathers of a hunting bird, and replicated in her master’s embroidered glove:

Is the poem intertextile, as well as intertextual: a response to a beautifully stitched hunting glove? The glove of ‘Handfast’ (a foreign object made of Spanish leather and Far Eastern silks) teaches an important lesson: place is hard to place, identity is complicated. These ideas speak to the title of Capildeo’s collection: Measures of Expatriation.

One last intertext: a famous Renaissance poem about love and hunting: the sports of the elite. ‘Whoso list to hunt’, whispers Sir Thomas Wyatt, ‘I know where is an Hind’. It is popularly assumed that Wyatt’s poem is about Anne Boleyn, shortly to become the second wife of Henry VIII. Wyatt’s speaker gives up hunting his deer, recognising the futility of trying to capture a creature that is wild, and that belongs to someone else. ‘I leave off therefore,’ he says, ‘Sithens in a net I seek to hold the wind’.

Capildeo’s speaker doesn’t give up the chase. Instead he swallows up the predator: ‘You are flying inside me’. A big man, ‘seventy times’ the weight of his hawk, Henry VIII is the master who ‘stand[s] fast’ at the heart of this poem, rhyming with the ‘handfast’ of the title, admiring, and grasping, his hawkish love.

Have you read any of the intertexts Helen Smith has spotted in Vahni Capildeo’s ‘Handfast’? Do you think you would have spotted any of these in the poem?

Helen Smith has deliberately written about these intertexts as possibilities and suggestions instead of definite facts. Does this help you to feel more confident in having a go at spotting other intertexts and relationships between poems?

Have a look at Vahni Capildeo’s response to Smith’s reading (in the ‘downloads’ section).

What is it like to view a critical piece of work on a poet, which has been commented on by the poet themselves (Helen says it was quite nerve-wracking to hand over her analysis to the poem’s author!)?