In this step, we will consider how data from family studies are used in the ACMG guidelines1 and ACGS update.2

Since we have not discussed these types of data before, we will cover them here in some detail.

Look at the figure below, which shows the part of the ACMG evidence framework that relates to de novo data.

De novo data can be used as evidence to support a pathogenic classification. There are two criteria that might be used to support pathogenicity (PS2 and PM6).

A variant is described as ‘de novo’ if it occurred for the first time in an affected individual and was not inherited from their parents. This type of inheritance is not uncommon for rare diseases.

De novo status can be used as evidence in support of pathogenicity if the phenotype and family history of the disease are consistent (e.g. the clinical presentation is concordant with the gene and, for dominant variants, the parents are unaffected parents but the child is affected).

This consistency is important, because de novo occurrence alone is not enough to determine that a variant is pathogenic. In fact, whole genome sequencing studies have shown that healthy individuals carry around 40-80 de novo SNVs in their genome, with an average of 1-2 affecting the coding sequence.3

When assessing apparently de novo variants it is important to confirm paternity and maternity wherever possble. Without doing this there remains the possibility that a variant could be clinically insignificant if inherited from a healthy but unknown and untested biological parent. The ACMG guidance1 uses different codes depending upon whether paternity and maternity have been confirmed:

It also stipulates that these codes can only be used if the phenotype is consistent with that expected for the gene in question and suggests using a sliding scale, from supporting to strong, to reflect how well the phenotype matches the genotype, how specific the phenotype is and if there is a high degree of genetic heterogeneity.

For instance, if a de novo variant has been identified through trio exome sequencing (therefore confirming maternity and paternity) but the phenotype is consistent with the genotype but non-specific, PS2 can be used but only at supporting strength: PS2_Supporting.

Detailed guidance4 on how to determine the strength level at which PS2/PM6 can be applied has been developed by the ClinGen Sequence Variant Interpretation working group:

Look at the figure below, which shows the part of the ACMG evidence framework that relates to allelic data.

This category is applicable to recessive conditions and considers the phase of a variant, i.e. whether a variant is in cis (on the same chromosome) or in trans (on the opposite chromosome) with an established pathogenic variant. This requires testing of parents to confirm phase. 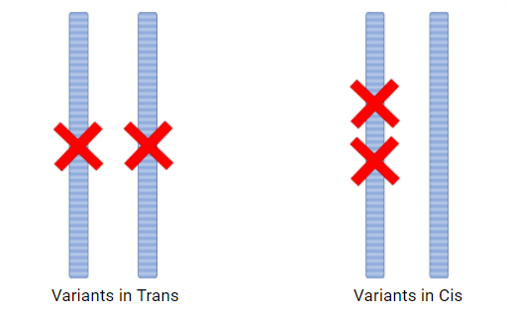 In recessive disease, the evidence category PM3 can be used if the variant is in trans with a (likely) pathogenic variant in an affected individual.

PM3 can be up- or downgraded, according to whether the variant phasing has been confirmed or not, and the classification of the variant observed on the other allele.

Detailed guidance5 on how to apply PM3 has recently been published by the ClinGen Sequence Variant Interpretation (SVI) working group:

Allelic data can also be used in support of a benign variant classification:

Look at the figure below, which shows the part of the ACMG evidence framework that relates to segregation data.

Segregation data can be collected from families where multiple relatives are affected, and from individuals across multiple affected families.

Segregation data must be considered carefully as there are several caveats:

We have created a PDF table summarising these three different categories of evidence, and how they relate to the various ACMG criteria. We suggest that you take some time now to study this table in detail, make sure you understand the circumstances in which each evidence criterion is used, and download it for future reference.

Again, whilst this provides a brief summary, those wishing for full details should refer to the relevant sections of the ACMG guidelines1 and ACGS update.2

Family studies may seem a relatively easy way to investigate a variant’s pathogenicity. However, you will now have learnt that many affected family members are needed to provide significant evidence.

Can you think of any other complexities in testing multiple relatives, and why this may not always be the best option for patients?

For those taking part in the external course evaluation please follow this link to provide feedback for the step.