In this article, we walk you through some of the academic background and the definition of 'subculture'. Let's explore.
© Keio University

Let’s have an overview of “subculture” by reviewing some descriptions by scholars.

According to Oxford English Dictionary (the OED), subculture, means “an identifiable subgroup within a society or group of people, especially one characterized by beliefs or interests at variance with those of the larger group”.

The term first appears in English language documents in 1914. Originally “subculture” indicated a particular group of people and their culture. For example, the OED shows an example of “subculture” as follows:

View Course
As Terry Eagleton discusses in The Idea of Culture,(1) the concept of “culture” has an aspect counter to “Culture” with capital C, which is supposed to hold universal and transcendental values for everyone (Eagleton 40). Subculture is, if we follow Eagleton’s argument, “a culture,” leading us to “identity and solidarity” not to authenticity or authorities.
In 1947, Milton M. Gordon defines subculture in his famous essay “The Concept of Sub-Culture and Its Application”(2) as follows:

A concept used here to refer to a sub-division of a national culture, composed of a combination of factorable social situations such as class status, ethnic background, regional and rural or urban residence, and religious affiliation, but forming in their combination a functioning unity which has an integrated impact on the participating individual.

Gordon later explains that each subcultural group has ethnic, class, and regional differences, but each group established their own “world within a world.” Subculture, in this sense, could be defined as “culture” within “Culture,” which may be related to counter culture.

How does this theory apply to Subculture in Japan after WWII? Akio Miyazawa, arguing in his Nippon Sengo Sabu Karucha Shi(4) [A History of Subculture in Japan after WWII] (2014) [fig.1], in which he deals with his personal memories from the 1960s through 1990s, points out that at the beginning Japanese subculture was greatly influenced by American West Coast counter-culture (chapter 1).

According to Miyazawa, the word “subculture” first appeared in Japanese documents when an article by Kenji Kanesaka, a visual artist and critic, was published in Bijutsu Techo [Art Notebook] magazine [fig.2] in February Issue of 1968. 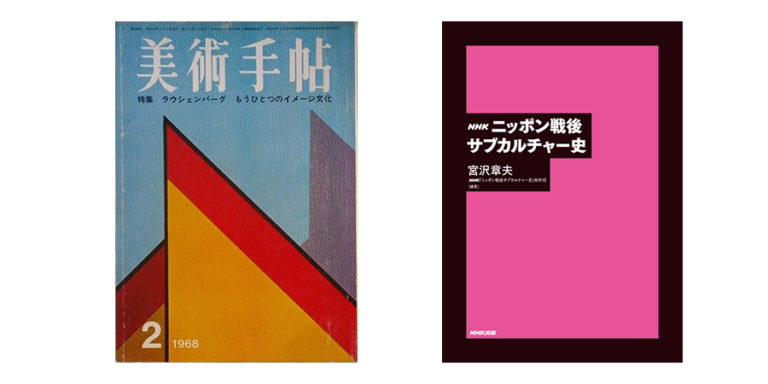 In his article, “Wakudeki heno Izanai: Kyampu to Hippi Bunka(3) [An Invitation to Indulgence: Camp and Hippie Subculture],” Kanesaka points out that people are witnessing a big transition of industrial art from straight lines to winding and curvy lines which could be compared to Art Nouveau at the turn of the century.

Seeing the traditional rules of art and the traditional sense of being free, licentious colour combinations are now flourishing in, the so-called, Hippie Culture, Kanesaka mentions this cultural phenomenon is “bad taste,” and “this could be called subculture, which is yet to be culture” (3),p.87.

It is interesting that Kanasaka seems to believe that subculture is not yet culture, as if subculture were, in other words, an immature condition that has yet to become a culture, even though subculture has the power to break through the traditional sense of value.

Roughly since the 1990s, “subculture” has been often abbreviated as “sabukaru” when we talk about Japanese subcultures. One of the first documents which include “sabukaru” is, as far as we researched, Eiji Otsuka’s Sengo Minshushugi no Rihabiritaishion(5) [Rehabilitation of Democratization after WWII] (2001). In Otsuka’s context, sabukaru connotes a sort of junk-ness and ephemerality.

Subcultures in the Japanese context may not indicate cultures in ethnic or regional subgroups as Gordon points out. Japanese subcultures may rather indicate marginality, immaturity, ephemerality, or vulnerability.

Subcultures in a contemporary sense generally refer to popular culture including animation, manga, video games and popular music. And yet, we need to recognize that “subculture” holds imbricated meanings.