Exploring the True Meaning of Kawaii

Kawaii does not only mean “cute” but may also refer to that which is “uncanny”. Please read the following article about Japanese Kawaii culture.

Origin of the Word “Kawaii”

Etymologically, Kawaii is derived from Kawa Hayushi (face blushed). The expression, first appearing around the 11th century, which originally means “to be embarrassed, or to be ashamed.” Kawa Hayushi phonologically changed into Kawayui, which means “to be ashamed, to feel awkward” in the 12th century, and consequently acquired the meaning such as “to feel bad about something/somebody,” and became associated with “pitiable qualities.” The other derivation of Kawa Hayushi is “Kawaisou” (pitiable, poor, miserable). Kawaii as lovable, pretty, or cute appeared as late as 16th century. Thus, it can be said that Kawaii evokes our tender feelings based on pity.

Kawaii is, thus, something or somebody with which or with whom you want to have a relationship. It might easily inspire the banal dichotomy such as protector/protected, ruler/ruled, controller/controlled; but Kawaii also has power over you. Since Kawaii is incomplete and immature, therefore, Kawaii is something you cannot completely understand or grasp, which ultimately opens up to the door to uncanniness. We will come back to this point later.

Now let us think about Hello Kitty. She is born and raised in a London suburb with her wonderful family, a nuclear family with her father, mother and her twin sister, Mimmy, who spends most of the time out of the spotlights. Hello Kitty lives in a lovely house with a Persian cat, charmy, as her own pet. She’s small (her height is, according to her official profile, around five-apples tall), and she is probably innocent and immature. If we follow those Kawaii criteria that Yomota offers in his study, Hello Kitty is the embodiment of Kawaii.

Now look at the Hello Kitty family. And you will probably see something weird about this family. The adults—father, mother, grandfather and grandmother— they all fully smile as you can see their eyes closed, which is a cultural symbol of a smiling. Kitty (as well as her sister Mimmy), to the contrast, have a blank face without a mouth. Sanrio is the company behind Hello Kitty. Sanrio’s official explanation on Kitty’s deadpan expression, in fact, acutely divulges the secret of Kawaii. Kitty’s mouthless face is, according to Sanrio, for sharing the feeling of the person she is with. When you are happy, Hello Kitty is also happy. Likewise, when you are sad, Hello Kitty understands your feeling. If Hello Kitty mirrors your feelings, then Kitty is not the object to be dominated, but rather you can identify with her.

Christie Yano acutely points this out in Pink Globalization: Hello Kitty’s Trek across the Pacific[fig.1] (3) published last year (2015): “Hello Kitty and other kawaii objects act as prompts for an empathetic response of caregiving. . . . However, in Japan there is an additional twist: Some consumers do not only want to adopt the cute commodity; . . . . they want to become it” (3, p.56) Yano, following the discussion by Kinsella(2), states that becomingness into a Kawaii object is a crucial point to understand cuteness in the Japanese context. Anne Alison aptly argues that this identification with kawaii object reflects amae-based relationship in Japanese culture. 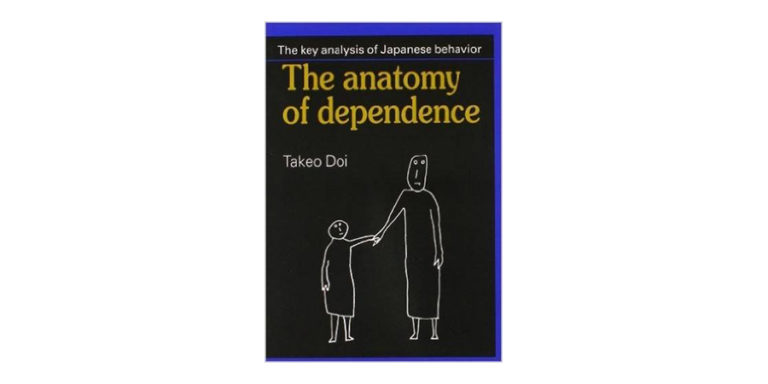 Amae has been one of the most frequently considered characteristics of relationality in Japanese culture since the prominent psychiatrist Takeo Doi published Anatomy of Dependence [fig.2] (1) in 1971.

Amae, whose literal meaning is “sweetening,” is, according to Doi, an attitude of indulgent dependence which is indispensable in order to build up a mutual relationship in Japanese culture. Doi asserts that “Amae, in other words, is used to indicate the seeking after the mother that comes when the infant’s mind has developed to a certain degree and it has realized that its mother exists independently of itself. In other words, until it starts to amaeru the infant’s mental life is an extension, as it were, of its life in the womb, and the mother and child are still unseparated. However, as its mind develops it gradually realizes that itself and its mother are independent existences, and comes to feel the mother as something indispensable to itself; it is the craving for close contact thus developed that constitutes, one might say, amae.” Doi indeed admits that this phenomenon is not limited to Japanese culture, but he, focusing on the untranslatability of “amae,” argues its efficacy to understand “the ways of thinking of the Japanese.”

Let us here remember that The Anatomy of Dependence (1) was published just three years earlier than the “birth” of Hello Kitty, a blank faced cute creature, which mirrors your feelings. Explaining the historical context of Kawaii and girls culture in the 1960s and 1970s, Shinji Miyadai, a Japanese sociologist, analyzes, without mentioning Takeo Doi’s argument, that a proliferation of youth cultures recreate the traditional mother-child stories which frequently appeared on Manga magazines, into the so called “high school drama.” Miyadai states that the self-fashioning of girls in the 60s and 70s is accompanied with separation from their elder family members, including mothers, and discovery of a new relationality with others. Youth culture brought about new standards which girls would follow instead of traditional examples such as Purity, Honesty, and Beauty. And, that is an inclination to Kawaii culture for building up a new amae relationality with others. It is highly possible that Hello Kitty, who was born in 1974, became an object to accept “the craving for close contact” of girls, who need “amae” dependent relationality with others.