Yaoi Manga: A Form of Expression of Female Desire 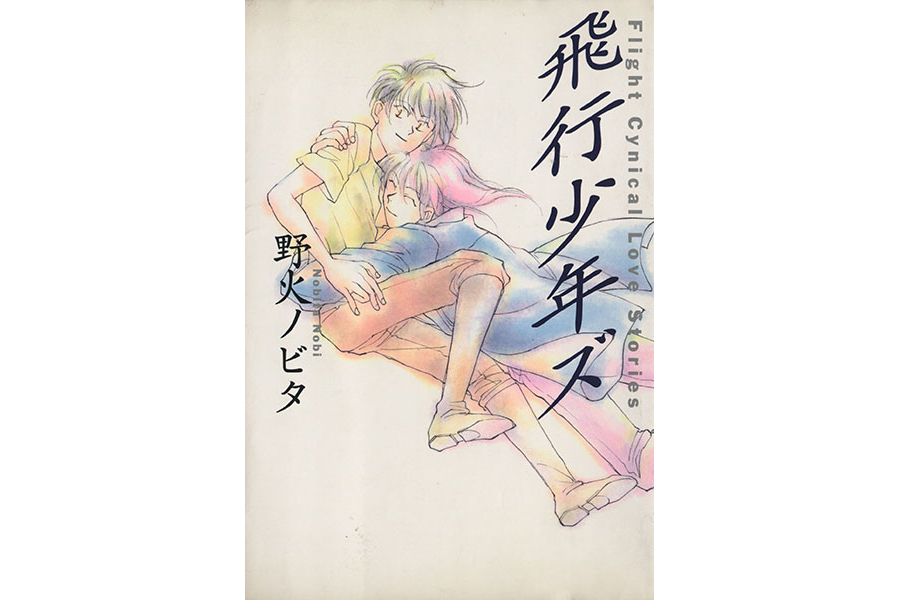 Nobi started her creative career as a yaoi manga writer. The top image of this step is one of her Yaoi works from a commercial publisher, which depicts two characters, Kurama and Hiei, from Yoshihiro Togashi’s Yuyu Hakusho [Ghost Files]. Nobi creates love relationship between Kurama and Hiei, which has not been clarified in the original story. Nobi envisions intimacy between the two as you see in the book cover above, recreating their friendship into love.

In the following article, Nobi analyzes why she was so attracted to yaoi that she could not help creating the derivative works with frequent explicit sexual descriptions.

I have liked manga ever since I was a child, and eventually, I started drawing my own. If I recall correctly, the first manga I drew was of a sex scene between two boys. This was not a copy of Kaze to ki no uta [The Poem of Wind an Trees], nor was it completely original. I pulled in male characters from an anime that I liked at the time. The manga consisted only of a sex scene in a rape-like situation that was devoid of love; it was completely pornographic, with the illustration of sex itself as the only goal.

I can still clearly recall what motivated me to draw that: I had a desire. First, I loved those male anime characters. Second, because I loved them, I wanted to get my hands on them in a concrete way—in other words, I wanted to engage with them sexually. And the reason why I chose this method of doing so was not so that I could put myself in the manga or have a female character stand in for me, but so that I could have the help of a male character to force the act.

Why did I choose yaoi? Is yaoi what I desired—could I see my desires fulfilled by yaoi? I asked myself these questions ever since I became aware of my desire. To me, it was like asking myself what I am. I have collected the results of this soul-searching on the topic of yaoi below, using myself as a sample.

Nobi explains her desire for the manga/anime characters she likes, and she wanted to build up a relationship with them; but she did not create or imagine a female character on whom she is supposed to project herself. Instead, she had a fantasy that the male character she loved had a homosexual relationship with another male character. But why does Nobi need such a twist? For Nobi, creating yaoi works relates to her own identity.

The word “yaoi” originates from an acronym of the phrase “yama nashi, ochi nashi, imi nashi” (“no climax, no punch line, no meaning”). At first, this phrase was not exclusively applied to dōjinshi [self-published magazine], but rather any kind of manga seen as tawdry and bereft of a story—in other words, the stories had no climax, no punch line (or denouement), and no meaning. They were just illustrations of the parts the artists wanted to draw; often single scenes, such as the introduction by itself, or just a specific situation. Later, some dōjinshi groups started to refer to their output depicting sexual situations between males as “yaoi,” in a teasing, self-deprecating manner. This name became the standard in the dōjinshi world, and the meaning of the word changed to refer to works that included sexual encounters between male characters or scenes of that kind.

Meanwhile, shōjo manga depicting love between males also continued to develop, as demonstrated by Keiko Takemiya’s Kaze to ki no uta [The Poem of Wind an Trees]. There are many such manga and novels in circulation, to the extent that they can now make up their own section in bookshops. In fact, these works have already become established as a genre separate from shōjo manga: “boys’ love.” This is an English-language reading of the existing genre name “shōnen-ai,” and is used to differentiate the genres. Many works in the boy’s love genre have a lighter, everyday nature and tend to be more upbeat, while shōnen-ai traditionally has a strong aesthetic inclination. Original boys’ love dōjinshi are also widespread, but strictly speaking, those are not yaoi even if they are based on love between males. This is because they are original. It is true that the first works to be called yaoi were originals as well, and at the time, the term “yaoi” did not differentiate between original works and parodies. However, as boys’ love became more common, and that the fact that it depicted love between males had become obvious, people stopped referring to boys’ love content as yaoi, particularly in the case of original boys’ love dōjinshi. In short, yaoi currently refers specifically to parody dōjinshi.

What is the importance of YAOI to females?

You might think it is just a crazy female fantasy of male homosexual relationships in manga/anime works, destroying the original setting of those works. Yaoi, however, offers complex issues of female sexuality as well as their undermined positions in society.

Of course, not all females who like dōjinshi also like yaoi. Some are not interested in yaoi, and some even find it unpleasant. There is no doubt that just like male otaku, female otaku simply like anime, manga, and the characters appearing within. However, that fact alone does not categorize them. Perhaps this ambiguity is related to the difficulty of understanding yaoi. If it were exclusively the case that female otaku simply like manga and anime characters in exactly the same way as male otaku, then they would probably draw manga depicting love between male and female characters in the same way as male otaku, rather than manga depicting love between male characters. However, this does not bear out in reality. While many of the parodies do not feature sexual imagery, and some are about relationships between male and female characters (called “normal” to differentiate them from yaoi), half if not more of the parodies aimed at females are yaoi. True, the circles that produce these parodies have a wide variety of inclinations, and one can hardly check every book exhibited at Comiket, so there is no way to get a precise picture of the proportion of yaoi within all circles and all dōjinshi, but still, this is the very real sense that I had when I personally attended the event as part of a circle.

Nobi discusses that there is a difference between male and female otaku. In female yaoi dojinshi, why is sexual imagery frequently needed? What does the sexual imagery signify?