How can small boys fight with adults and win? In this article, Prof. Isamu Takahashi discusses the supportive devices used by heroes in manga.
© Keio University

We would feel a greater catharsis than in other cases when we see a young protagonist beat an elder and therefore bigger, stronger, and more cunning opponent, precisely because it is at least a very difficult task to achieve in our real world. But what if he/she can wield unthinkable, supernatural powers?

Ninjutsu as an Omnipotent Magical Power

Ninjutsu, or ninja skills, have been serving this function in juvenile fiction. Ninjutsu was not exclusive to child protagonists, of course. In the Edo period, some adult ninjas or thieves, though mostly villains, were depicted exerting black arts to fight foes; one of the most famous is Jiraiya, who manipulates a giant toad or transforms himself into one [fig.1]. 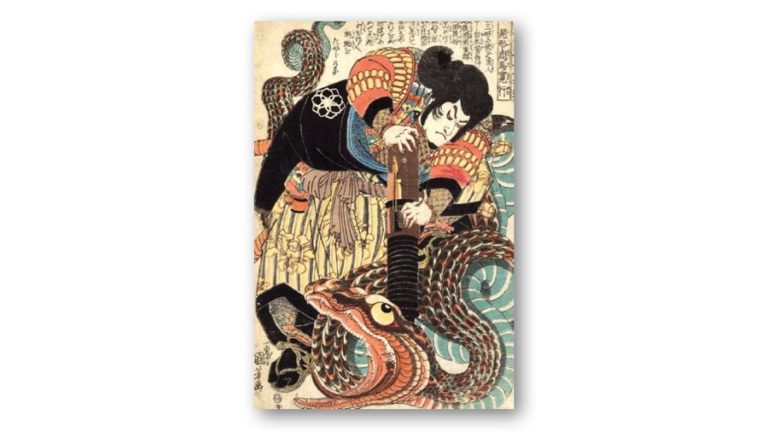 Fig.1. Jiraiya in Ukiyoe By UTAGAWA Kuniyoshi, Eight Hundred Heroes of Our Country’s Suikoden 12 (10 December 2014, at 01:22). Source: In Wikipedia: The Free Encyclopedia.

On the other hand, SARUTOBI Sasuke, as we have mentioned in Activity 2, is a boy ninja: at the age of 15, after being trained in ninjutsu by a master ninja for three years, he is picked out by the warlord SANADA Yukimura and comes to serve him as a retainer. It can be argued that this image of Sasuke has long been providing the archetype of ‘a boy who fights with adults’: with courage in heart and superpowers in hand, the youthful hero is destined to struggle with formidable enemies. Ninjutsu here functions as a kind of ‘power-boosting’ device for the hero, complementing the relative lack of strength. Compare him with the world-famous boy reporter Tintin created by Hergé in 1929 [fig.2]. Courageous and intelligent, he tackles secrets and plots with his own hand (sometimes powered by guns, though). This comparison helps us to notice how many of Japanese contemporary ‘battle’ narratives utilize the same pattern. Now we are going to look at some examples mainly (for the sake of convenience) from manga for boys. 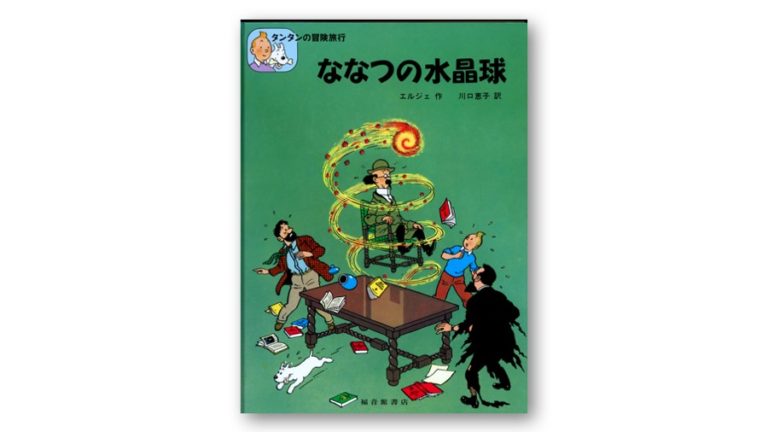 When it comes to ‘a boy ninja’ in Japanese manga and anime, we cannot omit the name of Sasuke in SHIRATO Sanpei’s Sasuke (serialized 1961-66 in Shonen). Though a child with a pretty face, he is an expert ninja using a variety of ninjutsu and fights with ninjas and warriors sent by the Tokugawa Shogunate. Shirato provides readers with detailed and seemingly scientific explanations of Sasuke’s ninjutsu, but in many cases, we can say, they are impracticable.

In a still more magical vein is those found in ANZAI Nobuyuki’s Rekka no Hono’o (Flame of Rekka, 1995-2002 in Weekly Shonen Sanday), in which the hero Hanabishi Rekka, a contemporary ninja fan but able to produce fire with his hands, gets involved in battles of real-life ninja [fig.3]. In this story, we can find abundance of ninjutsu of making flame as a supernatural power and other magical objects.

KISHIMOTO Masashi created another ninja idol in Naruto (1999-2014 in Weekly Shonen Jump) [fig.4]. Uzumaki Naruto is an adolescent ninja apprentice somehow isolated in his village, but in him is sealed a powerful nine-tailed demon fox. Apart from powerful and fantastic ninjutsu, we encounter the familiar names of Sasuke or Jiraiya among the characters. 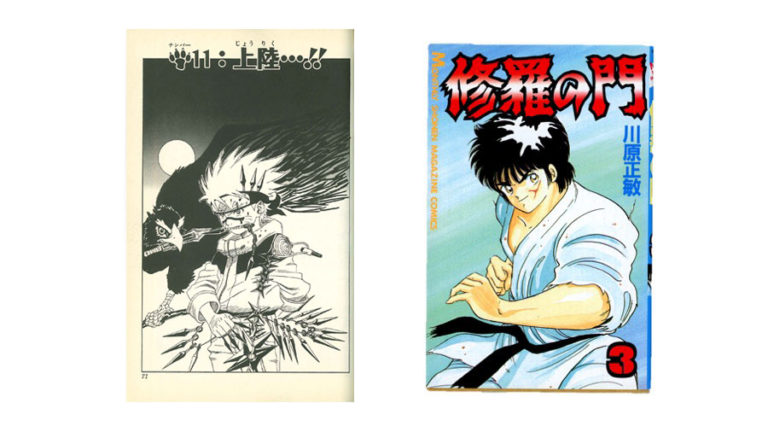 Although it is not ninjutsu in a strict sense, Mutsu-enmei-ryu martial arts depicted in KAWAHARA Masatoshi’s Shura-no Mon (The Gate of Asura, 1987-96 and 2010-15 in Monthly Shonen Magazine) [fig.5] would be counted as a subspecies of supernatural ninjutsu. Mutsu Tsukumo, the young successor of the 1000-year-old deadly martial arts, embarks on a endless series of death-dealing battles in order to prove his arts to be ‘invincible’. Techniques practiced by Tsukumo and other fighters are almost beyond human capacity, though certainly not supernatural, like ryu-ha (dragon attack). This is a kick technique with both legs aimed at the opponent’s head by quickly crossing them; when dodged, however, the atmospheric vacuum produced by the quickness of the legs’ movement will slash the opponent.

Whereas ninjutsu has a historical (though very twisted) basis, other, more unabashedly ‘supernatural’, powers have also been given to the heroes, especially after the introduction of western fantasy literature and computer games in the 1980s. In this sense, ARAKI Hirohiko’s legendary Jojo-no Kimyo-na Boken series (Jojo’s Bizarre Adventure, 1987-2004 in Weekly Shonen Jump and 2005 to present in Ultra Jump) can be seen as an exemplary work to bridge the transition: in the first two parts, it is hamon (ripple), an arcane technique to destroy vampires derived from the arts of ancient oriental Taoist ascetics [fig.6], with which the protagonists are armed with; in the later parts, however, the characters fight with the help of yu-hamon or stand, which is the embodiment (in a human form) of preternatural powers. 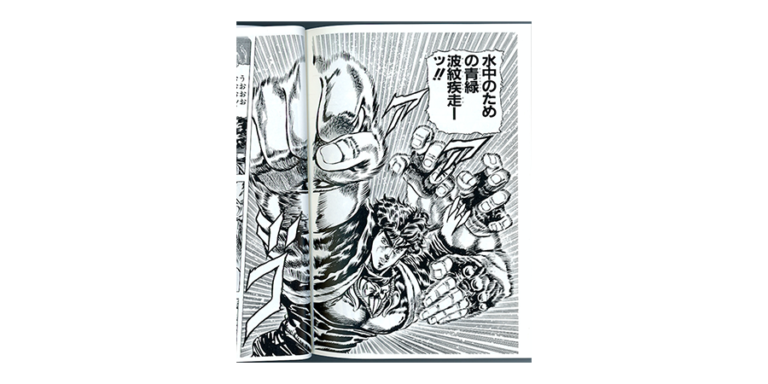 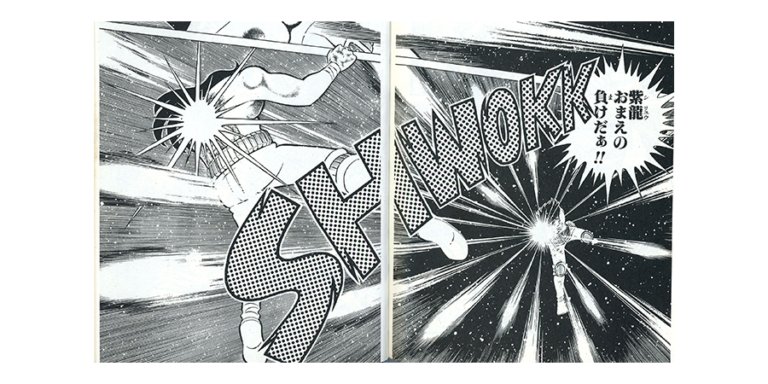 While Seiya and other saints take part in adventures on our earth (however fantastic), stories like MASHIMA Hiro’s FAIRY TAIL (2006 to present in Weekly Shonen Magazine) are set in worlds more like western ‘high’ fantasy literature or fantasy role-playing computer games: the protagonist boy Natsu, a fire wizard, is one of the ‘dragon slayers’, and the Fairy Tail in the title refers to the ‘guild’ to which he belongs[fig.8]. 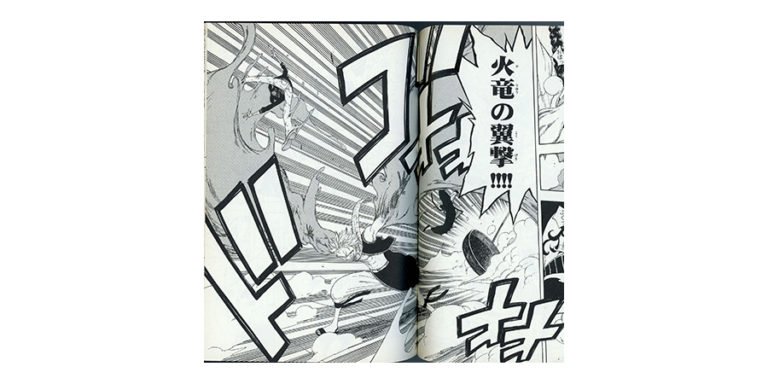 A good comparison can be made with ARAKAWA Hiromu’s world in Hagane-no Renkinjutsu-shi (Fullmetal Alchemist, 2001-10 in Monthly Shonen Gangan), where ‘alchemy’, a half-scientific, half-magical art, is exercised in a steampunkish nineteenth-century-like civilization[fig.9]. The protagonist Edward Elric is the youngest state alchemist who has delved deep into the secret of alchemy and the world.

It can be magical items that provide the heroes exceptional powers. One of the stories in which legendary swords are taken up is Onikiri-maru (Demonslayer, 1992-2001 in Shonen Sunday Super-special Issue)[fig.10]. Here ‘Onikiri-maru’ is the name of the ancient Japanese sword brandished by a teenage-boy-looking protagonist as well as the name of the boy himself. In fact, he is a powerful demon without typical horns, the embodiment of which, however, is none other than his mysterious sword. 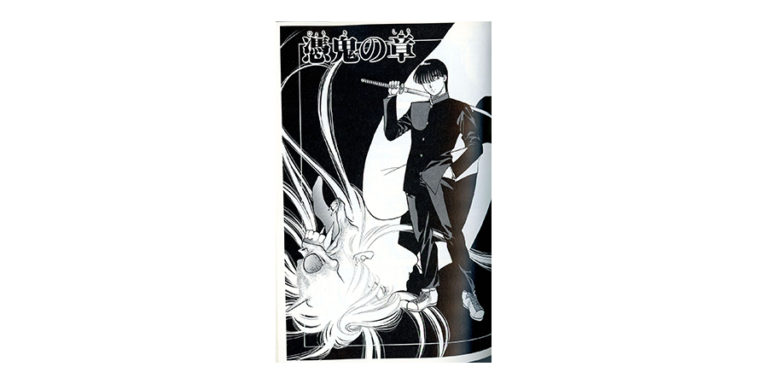 Fig.10. The hero with his legendary sword Onikiri-maru, against an enemy demon. © Onikiri-maru, vol.1, p137, by KUSUNOKI Kei, Shogakkan 2006

In contrast to the supernatural origin of Onikiri-maru, Ushio in FUJITA Kazuhiro’s Ushio to Tora (Ushio and Tora, 1990-96 in Shukan Shonen Sunday) [fig.11] first appears in front of us as an ordinary (though sincere and hot-blooded) Japanese boy, but he finds in his family’s warehouse a spear with magical force and an ancient powerful monster, Tora, stuck on the wall by that spear. The spear, made in ancient times to destroy monsters, transforms Ushio and gives him a special power for the task in exchange for his soul. 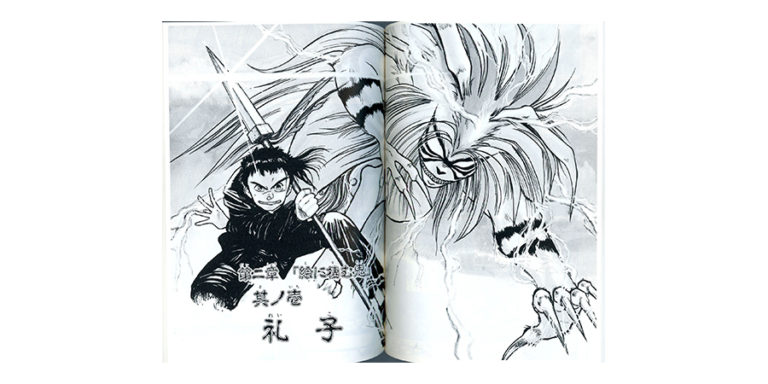 In the same vein, Kurosaki Ichigo in KUBO Tite’s Bleach (2001-16 in Weekly Shonen Jump) [fig.12], a high-school student a little bit sensitive to the spirit world, is made to act as a proxy for a shinigami, soul reaper. As a result, he is given a spiritual power to save good, straying souls and destroy evil souls, and a special sword called ‘Zanpaku-to’ (Soulslayer) to execute the duties. 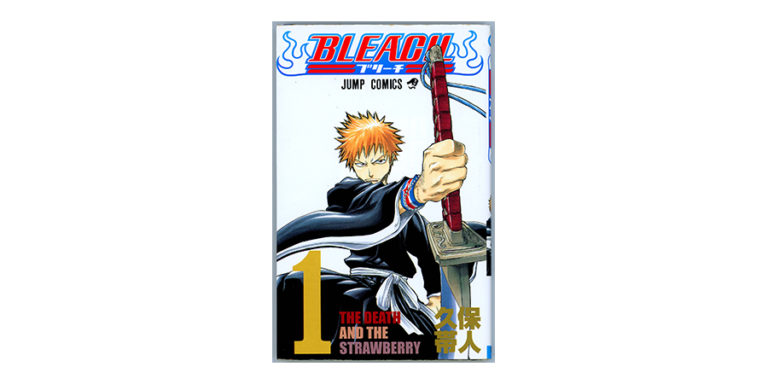 The above three works have tints of oriental myths and legends, but IWAAKI Hitoshi’s Kisei-ju (Parasyte, 1990-95 in Monthly Afternoon) shows an inclination to more science-fiction horror[fig.13]. A 17-year old boy, Izumi Shinichi, by chance gets parasitized in the right hand by a shape-shifting creature, later named ‘Migi’ (Righty) by Shinichi. As ‘ordinary’ parasites (duly successful in hijacking their hosts’ heads) with their extraordinary abilities instinctively attempt to kill humans, Shinichi is always put in difficult situations, but with Migi’s mighty help he manages to survive.

A similar, but perhaps more creepy, situation is explored in Baoh Raiho-sha (Baoh the Visitor, 1984-85 in Weekly Shonen Jump) again by ARAKI Hirohiko. Its protagonist Hashizawa Ikuro is a kidnapped 17-year-old boy, who is then experimented on with a parasitic worm called ‘Baoh’ into the host’s brain and produce a powerful bioweapon. By the work of the worm in his brain, he is, when attacked, covered with a protective armour and gains a superhuman strength and healing power.[fig.14] 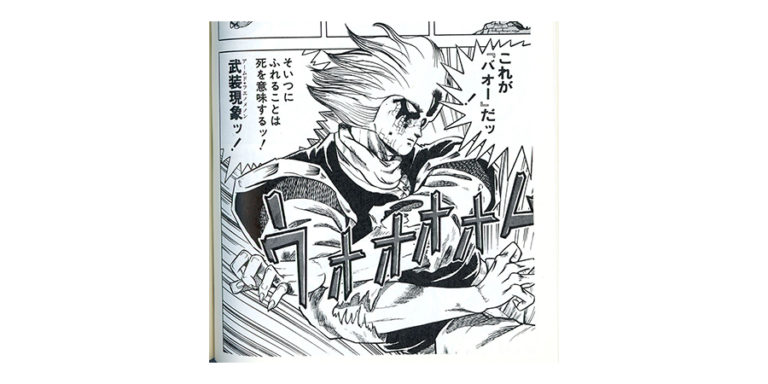 When the magical items are imagined in a more specific form, they appear before us as ‘robots’. It can be said that the way was paved by the so-called God of Manga, TEZUKA Osamu. His Tetsuwan Atom (Mighty Atom, or Astro Boy, 1952-68 in Shonen) [fig.15] depicts a humanoid in the shape of about 10-years-old boy (for he was created by Dr Temma as a surrogate for his son killed in a car accident), who, however, is atomic-powered and in possession of extraordinary abilities (of course superhuman) such as superpower and an ability to fly at high speed. What is poignant about him is that he is given emotion and conscience as well as superhumanly powers, which inevitably make him doubt his identity. 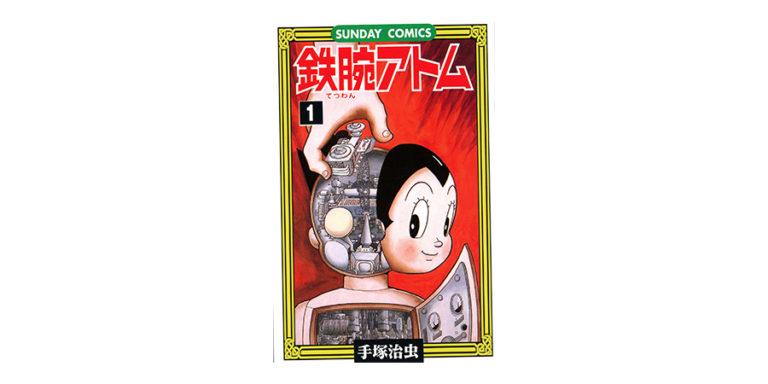 YOKOYAMA Mitsuteru’s Tetsujin 28-go (Iron Man No. 28, or Gigantor, 1956-66 in Shonen), in contrast, separates the boy protagonist and the robot, and makes the latter a giant[fig.16]. The giant robot is manipulated with a remote controller, regardless of the identity of the manipulator, that is, whether he/she is good or bad.

When the manipulator is put into the robot, we have the kinds of giant robot like NAGAI Go’s Mazinger Z (1972-73 in Weekly Shonen Jump) [fig.17]. The high-school boy protagonist, Kabuto Koji, one day finds a great robot in his grandfather’s laboratory placed in the basement of his house; it was built specifically to provide Koji with powers to stand against the terrible Dr. Hell, who aims at domination of the world with his robot troops. 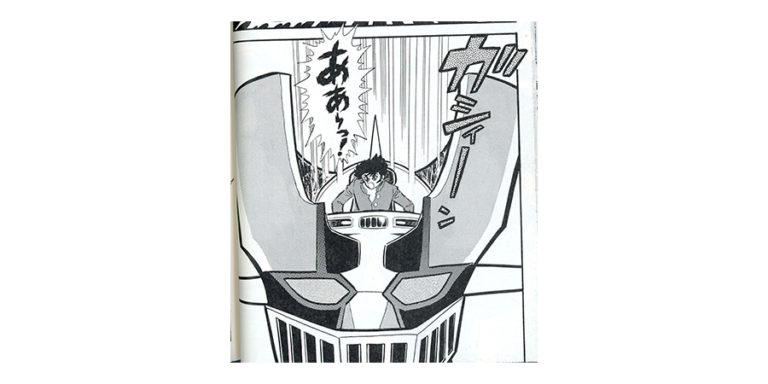 At this point, we can see that this line of power boosting device visibly culminated in Gainax’s Shin-seiki Evangelion (Neon Genesis Evangelion, aired in 1995-96 by TV Tokyo; comics by SADAMOTO Yoshiyuki, 1994-2013 in Monthly Shonen Ace and Young Ace)[fig.18]. 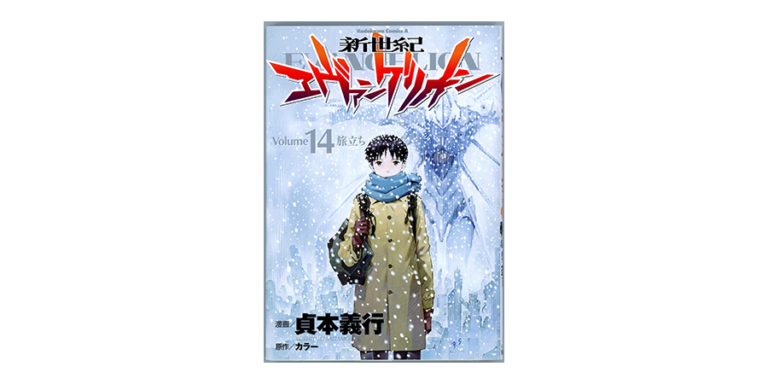 The protagonist Ikari Shinji, a 15-year-old boy, is half forced, by his own father, to pilot a giant bio-machine, called ‘Evangelion Unit 00’, which synchronizes only to the chosen few’s nervous systems, in order to defend the world against Angels’ will to annihilate humanity. The Evangelion machines’ forcefield alone can penetrate the Angels’, thus making their pilots the only hope for humans under threat. The robots, moreover, seem to have their own will, or consciousness. It has often been said that Evangelion is a work to deconstruct the genre of Japanese giant robot anime, but it is also one of the latest descendants in the long lineage of supportive devices for struggling boys.