Where do we come from? Do we hold a special place in the universe? Read about the humanist approach to these questions .

Before we explore whether a humanist can say there is anything special or valuable about human beings, we need to address the question of where we come from and the consequences we might draw from that.

The origins of the universe

The prevailing scientific consensus is that the Big Bang theory provides us with an explanation for the evolution of our universe. Many scientists accept that the theory does not provide a complete explanation of how our universe came to be. Questions still remain. However, as we shall learn in more detail next week, the history of science has taught us that in the absence of an existing scientific explanation we should be wary of turning to non-scientific or supernatural conclusions. The fact that we do not have a complete natural explanation does not mean there won’t be a natural explanation.

Not the centre of the universe

Whatever the explanation, for humanists, it is clear that the universe was not made for us. The more we have learned about the universe and ourselves, the more difficult it becomes to defend the position that we hold some special place within it. First the Copernican model of the solar system removed the Earth from its centre, placing it alongside the other planets as satellites of the Sun. Then Darwin’s theory of evolution further dethroned the human species, revealing that we hold no privileged place in relation to other living creatures; we are just another leaf on the tree of life. Psychologists, such as Freud, went even further, dismissing that which we thought of as central to our essence, our conscious identity, and revealing the role our subconscious desires play in our nature. Not only is it the case that we are no longer able to claim a position at the centre of the universe, we may not even be able to claim that what we generally think of as our identity is at the centre of ourselves. Claims that the universe was designed with us in mind are difficult to sustain in the light of such scientific discoveries.

A vast and hostile cosmos 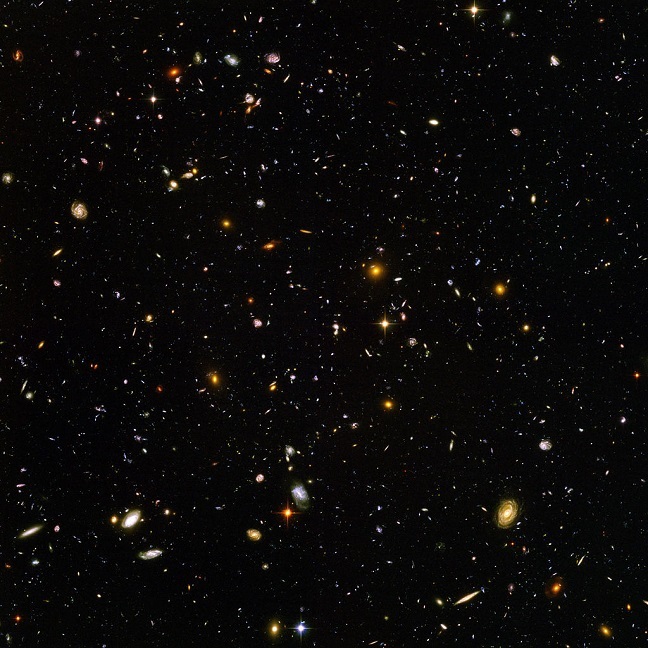 The image above was taken by the Hubble Space Telescope in 1995. The telescope focused on an area of sky equivalent to that covered by a human thumbnail held at arm’s length. Within that patch of sky it discovered around 10,000 galaxies. Scaling that up, astronomers now estimate that the visible universe contains over 100 billion galaxies. Our universe is vast, further diminishing the argument that it was built for human beings. Most of it is also extremely hostile to life.

Just like every other living thing on the planet, we are the product of biological evolution, a process free from intentional design or a goal-oriented purpose, but rather the result of random mutation and natural selection.

This course is not the place to address the evidence for the theory of evolution by natural selection other than to say it is overwhelming and accepted not only by the scientific community, but also by huge numbers of religious people around the world today.

More important for the question we are exploring this week is that our evolution leaves its legacy upon us. Not only in our physical bodies (our appendix, our tailbone), but also in our behaviour, in our animal instincts, hungers, and desires. Much more often than we care to admit, we are driven by such biological urges – anger, fear, greed, and lust – often in opposition to our ‘better nature’, and often unconsciously. Whatever else we are, we are animals.

Question: Does this understanding of human beings present a bleak picture of the human position, or is there still space for us to recognise something of value in being human?