Freedom of religion or belief requires the freedom to form those beliefs. Read about the humanist perspective on the consequences for education.

‘Surely one’s children should be given the advantages of one’s own development. Surely they should not be tied hand and foot all over again as their parents were tied to the absolute certainties of the past generation. Millions of children in the world are now being tied to the certainties of ten and twenty and thirty generations ago by this mechanism, wherein each generation refuses to let its children continue from the point it itself has reached.’
Brock Chisholm, Prescription for Survival

Education is essential for freedom. The freedom of religion or belief requires the freedom to form those beliefs. It requires that our beliefs are the result of our own decision-making capabilities and are not simply the product of any restricted teaching we were presented with in our youth. Education about beliefs and values therefore needs to be objective, critical, and pluralistic. It should aim to present ideas from as neutral a standpoint as possible and allow the opportunity for such ideas to be criticised. 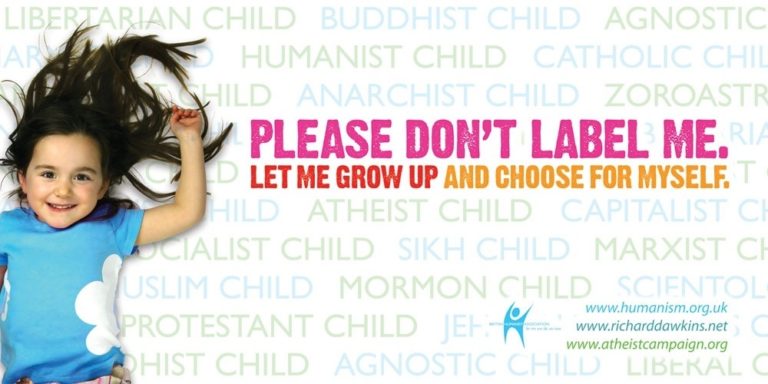 In 2009 the British Humanist Association ran a campaign entitled ‘Don’t Label Me’. The campaign was designed to promote the view shared by many humanists that young people need to be allowed to decide for themselves what they believe and should not be labelled as belonging to a religion or belief before they are old enough, and educated enough, to have considered the matter for themselves. We would think it preposterous to label a child as belonging to a particular political group. For many humanists, the idea of labelling one as belonging to a particular religion makes just as little sense.

Many humanists will support good quality religious education (Humanists UK is an active member of the Religious Education Council of England and Wales). Learning about the beliefs and practices of the increasingly diverse populations in many countries is essential to support mutual understanding and social cohesion. To fully succeed in this goal, religious education needs to cover teaching about more than just religions. It needs to both include learning about the beliefs and values of the increasing number of people with no religion, and reflect the diversity that exists within, as well as between, religions and beliefs.

Many humanists support the practice of philosophical communities of enquiry in schools as a way to help forge a sense of empathy and encourage respectful dialogue with others. It is also essential that education develops students’ capacity to think critically about questions around knowledge, meaning, and morality. A more objective and critical religious education means we can be more confident that the beliefs people hold have been produced with an awareness of the range of answers to life’s big questions, the opportunity to critically explore such answers, and the liberty to make a free choice.

One’s religion or belief is largely determined by where, and to whom, one is born. We now have the potential to support young people to make a free and informed decision about what they believe, and to reap the benefits that that may bring to our collective understanding of the world and of each other.

What should we teach?

The content of education is, of course, open to debate. One humanist approach is presented by the philosopher John White. For White, any culture that locates our true fulfilment in a life beyond this one is unlikely to prepare students for a ‘life of this-world flourishing’. He claims it is likely to place greater value on the purely intellectual faculties, which might benefit our future spiritual existence, over the development of the senses, the emotions, and the imagination, as these are intimately connected with our physical selves. Academic subjects will therefore take preference over the arts. This view is also often supported by those who see the goals of education in purely economic terms.

For those who believe this life is the one and only life we have, the pursuit of aesthetic pleasure and the chance to experience and enjoy human creativity are key ingredients of a fulfilling life. This does not mean that the academic subjects are not of value, nor that they themselves are not potential ingredients of a good life, but what we teach should take into consideration how each of us can best flourish in the here and now.

When asked why they go to school, the reply from students is often ‘to get a good job’. Perhaps we should aim for an education system that promotes the answer ‘to live a good life’. A good education can help us to succeed in the workplace. It can also help us to thrive in our free time.

Question: How free should children be to develop their own beliefs? Does this conflict with the human right of parents to bring up their children according to their religion or belief?