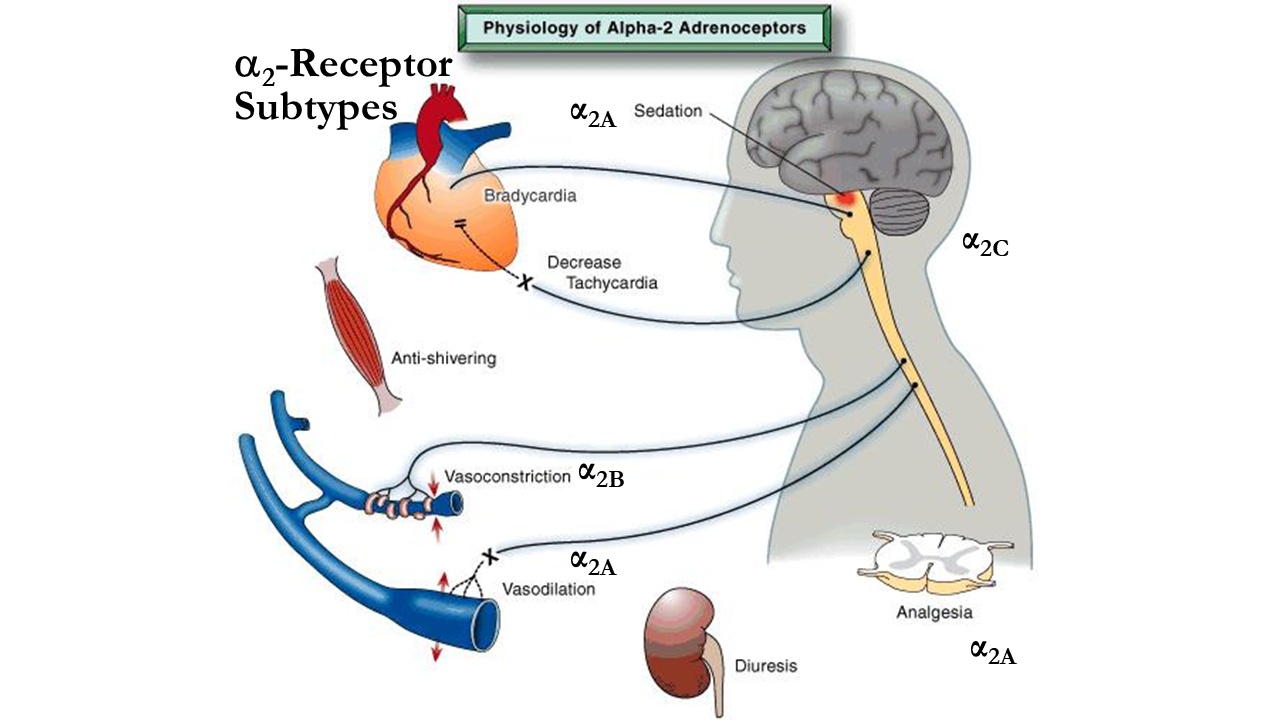 Clonidine and dexmedetomidine are alpha-2 agonists. They inhibit the release of epinephrine and norepinephrine by binding to pre-junctional alpha-2 receptors .

Dexmedetomidine is x8 more selective to alpha-2 compared with alpha-1 receptors than clonidine with higher potency and a shorter duration of action. Therefore, it is more suitable for intra-operative use. Clonidine may have a role in the post-operative period because of its high oral bioavailability, longer half-life, ease of administration, and lower medication cost. However, perioperatively it has mostly been superseded by dexmedetomidine which we will focus on for the remainder of this article.

Dexmedetomidine has a unique sedative action mediated via the locus coeruleus to produce natural NREM sleep. When used on its own, this creates “arousable” sedation with much less cognitive impairment. As an anaesthetic adjunct, it will reduce propofol maintained anaesthesia requirements by around 20-50% by acting synergistically to increase GABA receptor sensitivity. A single bolus dose will last for around an hour and, when using an infusion for longer procedures, it should be discontinued 30-60 minutes prior to completion of surgery to avoid delays in recovery.

Adult and paediatric sedation, premedication, ICU sedation and intraoperative multimodal anaesthesia. It produces dose-dependent sedation, anxiolysis and analgesia and reduces emergence delirium. There is no respiratory depression. It reduces heart rate and blood pressure by around 20%, although rapid administration will activate alpha-1 receptors and increase blood pressure.

Clear colourless solution 200mcg/ml routinely diluted to 2-4 mcg/ml with NaCl 0.9%. Has been used for nasal administration in its concentrated form as it is non-irritant.

IV loading dose 1 mcg/kg over 5-10 minutes. Best given prior to induction as less propofol will be required to achieve a loss of response during induction.
IV maintenance 0.2 – 0.7 mcg/kg/hr (NB NOT mcg/kg/min – errors have occurred)

Less than 5 minutes with a peak effect within 15 minutes

Can cause bradycardia and hypotension. Propofol-induced vasodilation and beta-blocker use may worsen this effect. If dexmedetomidine is infused rapidly or in high doses alpha-1 stimulation can lead to increased BP and bradycardia.