What is the carbon cycle?

Carbon is essential. All life on Earth is made up of compounds that contain carbon. Learn more in this course from the University of Exeter.

Carbon is essential. All life on Earth is made up of compounds that contain carbon.

We eat carbon in our food. Some we store or make into our body parts. Some we burn off as energy. Carbon leaves our body in our waste and is exhaled when we breathe it out as carbon dioxide gas: CO2. Plants and their aquatic cousins, algae and phytoplankton, turn CO2 into their bodies. We eat plants.

Try weighing yourself before bed and when you get up the next day. Many of us weigh less in the morning because when you are asleep you don’t eat but you do carry on breathing: oxygen in, carbon dioxide out. The weight loss is due to breathing out the carbon! 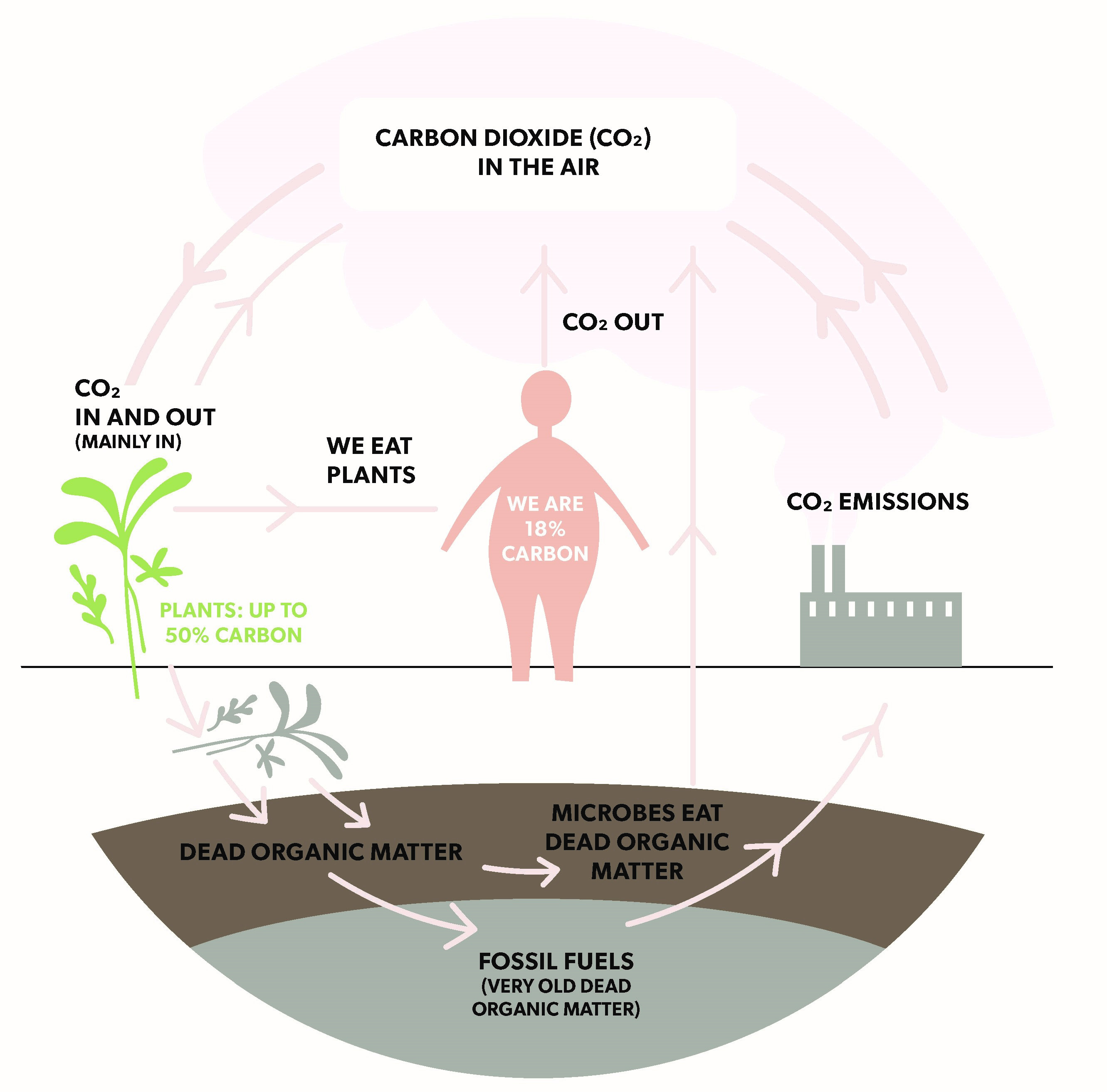 The carbon cycle. All life is part of the cycle, and plays a significant role in keeping it going. Human industrial activities have broken the cycle.

Climate change has given carbon a bad name. Carbon is always here, cycling around through air, water, land and life. Sometimes it’s part of the building blocks of the living and the land; sometimes it’s a gas (CO2) in the air and sea. In total the Earth has always had the same amount. The challenge is how much ends up as a gas in the atmosphere as this affects the Earth’s temperature. Without any atmospheric CO2, the world would be -18°C and a ball of ice. Humans cope well with an equitable temperature aided by around 300 ppm of CO2.

Today atmospheric levels are above 400ppm and rising, making things too hot for comfort. It’s a very delicate balance. Understanding the carbon cycle can help us deal with the problem. We need to keep more carbon locked into the living and land and less in the air and sea where excess causes climate change and ocean acidification. Carbon hangs out in three places, it’s the fugitive carbon that is the issue.

Carbon makes a great building block. It can bond with up to four other atoms to make many structures from proteins to plastics, dogs to diamonds and limestone to larch trees. The simplest and most common carbon compounds are called hydrocarbons. There are millions of known carbon compounds (AKA organic molecules), and many are found throughout the galaxy.

There are two carbon cycles at play in our Earth System. The ‘short’ biological carbon cycle happens over seconds, minutes and days, to thousands of years, involving biological processes on land and in the water and two main chemical reactions known as photosynthesis and respiration.

The ‘long’ geological carbon cycle happens over millions of years, moving carbon through rocks, volcanoes, and the atmosphere. Soils are a very big store of global carbon. Peatlands cover around 12% of the world’s land surface, but store twice as much carbon as all of the world’s rainforest. In Nigeria, a rainforest peat bog contains ten times more carbon in the peat than the forest above it. Biochar is also a stable, solid, rich store of carbon. Terra preta, similar to biochar has been used by Amerindians as a soil improver and carbon store for around 7000 years. In cold climates, permafrost (permanently frozen soils) store massive amounts of carbon that is locked away. But, as they thaw from rising temperatures, this carbon is now vulnerable to release.

However, none of these are as big as the store of carbon in the oceans. There’s around ten times more carbon in the oceans than in the soil. CO2 can easily dissolve into sea water (although this may change as the oceans become more acidic). Plankton near the surface absorb carbon during photosynthesis, which then passes up the marine food chain. Some animals, such as corals, also produce calcium carbonate skeletons or shells. As marine animals die, their bodies – and this carbon – sinks to the ocean floor.

The long geological carbon cycle is the biggest cycle, but takes hundreds of millions of years. This much longer, slower carbon cycle is helping scientists to explore solutions to climate change. Our body regulates its temperature. So does the Earth. The geological carbon cycle is a vast thermostat. It removes excess carbon from the atmosphere and ocean on a timescale of tens to hundreds of thousands of years. Then it cycles carbon through the Earth’s crust on a timescale of 200 million years. This ancient, slow dance, heats and cools the Earth as it goes.

<img src="https://ugc.futurelearn.com/uploads/assets/9e/76/9e76e1ee-7d88-4733-88b2-8efa52651004.jpg" alt="Cartoon diagram of carbon's longest cycle. Driven by a combination of geology, biology, chemistry and physics over millions of years. Involving players at all scales: from small algal coccolithophores (4/1000th of 1mm) to Earth’s vast tectonic plates. CO2 is released into the air from underground stores via volcanoes, and breathed out by animals (dinosaurs in diagram). This mixes with water in the air to make slightly acidic rain which dissolves granite into calcium bicarbonate and silicic acid which washes into the sea. In the sea, some microalgae make shells from calcium carbonate or silica. When these creatures die, the shells sink to the bottom as sediment. Over time, and with tectonic plate movement, the calcium carbonate (limestone) and silica change under great heat and pressure into rock such as granite plus CO2. Some tectonics push up; limestone cliffs are made from calcium carbonate and and flints made from silica like the white cliffs of Dover.”> The long-term carbon cycle; operating on time scales of millions of years.