Learn more about the background of Noguchi room.
© Keio University

Many cultural properties exist (or have existed) on the Mita Campus. However, the Noguchi Room—the main theme of this course—had particularly high value as a spatial design created by the sculptor Isamu Noguchi (1904-1988). In this Step, we’ll trace the relationship between Isamu Noguchi and Keio, and the process that led up to the creation of the Noguchi Room. 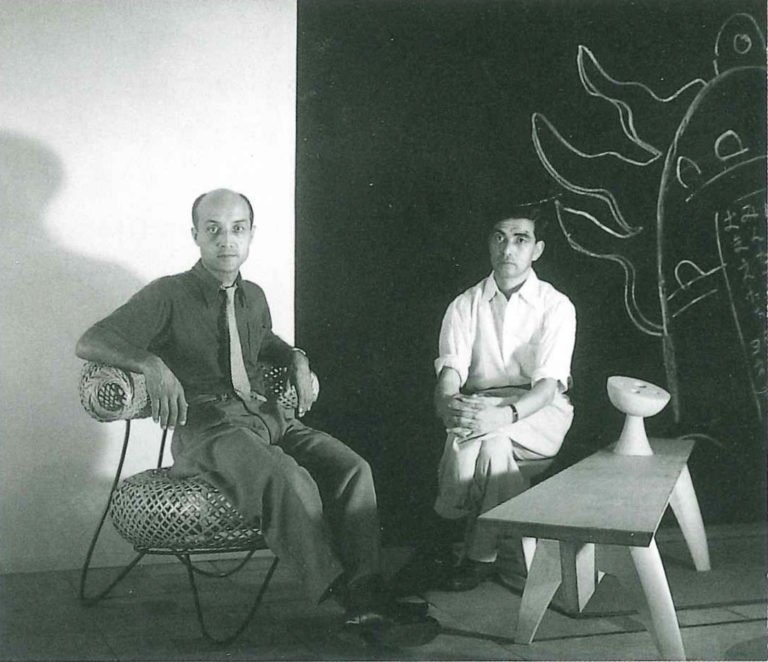 Noguchi when the Noguchi Room was designed (at left in photo) (Banraisha: A Concerto of Yoshiro Taniguchi and Isamu Noguchi (in Japanese), edited by Makiko Sugiyama, 2006, Kajima Institute Publishing, p. 64, photo by: Yoshio Watanabe)

In 1950, when Isamu Noguchi visited Keio University, he had already gained an international reputation as a sculptor. His father, Yonejiro Noguchi, taught at Keio for 40 years, so Noguchi had a connection with the university. At the Mita Campus, Noguchi talked with artists who contributed works to Keio, such as the architect Yoshiro Taniguchi, the painter Genichiro Inokuma (1902-1993), the sculptor Kazuo Kikuchi (1908-1985), and two students of his father, Junzaburo Nishiwaki (1894-1982) and Kenji Moriya (1898-1972). Noguchi and Taniguchi were the same age, and hit it off well together. Taniguchi asked Noguchi if he would like to do a collaboration. As one movement in a “symphony of structural form,” it was decided they would execute a spatial design using one section of a faculty building then being planned. The result was a conversation space in the Second Faculty Building called the “Noguchi Room.”

Noguchi later spoke about the experience:

I didn’t do this work just because of my father’s ties to Keio. My father’s poetry embodied both Eastern and Western perspectives, but more than that, I felt both my background, and my very identity suited me to the task.
(Isamu Noguchi, “On Work,” Shinkenchiku, Vol. 27, No. 2, February 1952, in Japanese)

During World War II, Noguchi was interred in a concentration camp on the American mainland as a person of Japanese ancestry. But he was a foreigner to the Japanese. Noguchi felt this as a break in his identity, and part of his internal motivation in designing the Noguchi Room was to integrate his roots in both the East and West. This took the form of a fusion of Eastern and Western design, as expressed in the Noguchi Room.

Noguchi was highly motivated as an artist. He was active as a sculptor, but also had a strong interest in spatial art harmonizing architecture, sculpture, and the surrounding natural environment. As we’ll discuss in more detail in later Steps, Noguchi had long tried to reconcile artificial objects and natural materials in his works. The result was composite art—spatial designs incorporating furnishings harmonized with architecture, gardens, and sculptural works.

He shared this point of view with Taniguchi, who designed the Second Faculty Building housing the Noguchi Room. For example, the sculpture Seinenzo by Kazuo Kikuchi (1908-1985) (Step1.4) was acquired by Taniguchi for the front court of a school building he designed. In this and other ways he strived for an overall effect encompassing architecture and the surrounding environment. In short, the Noguchi Room came into being due to an encounter, on the stage of Keio University, between two artists whose creativity transcended a single field of art. The Noguchi Room was a work of incalculable artistic value.

Sculptor, designer. Born in Los Angeles to a Japanese father and an American mother. He spent his childhood in Tokyo and Kanagawa. At age 13, he traveled alone to America. He studied as a pre-medical student at Columbia University, but dropped out with aspirations to become a sculptor. After attending art school in New York, he studied under, and was strongly influenced by, Constantin Brâncuşi in Paris. Moving beyond sculpture, he expanded his creative activities into other areas, including design of interiors, parks, other large spaces, and stage design.