So far, we have learned about the background, history, and creation of the Noguchi Room. Now, we’ll look more closely at its relocation. Before doing that, let’s review the chronology of key events relating to the Second Faculty Building and the Noguchi Room, including the process of relocation. 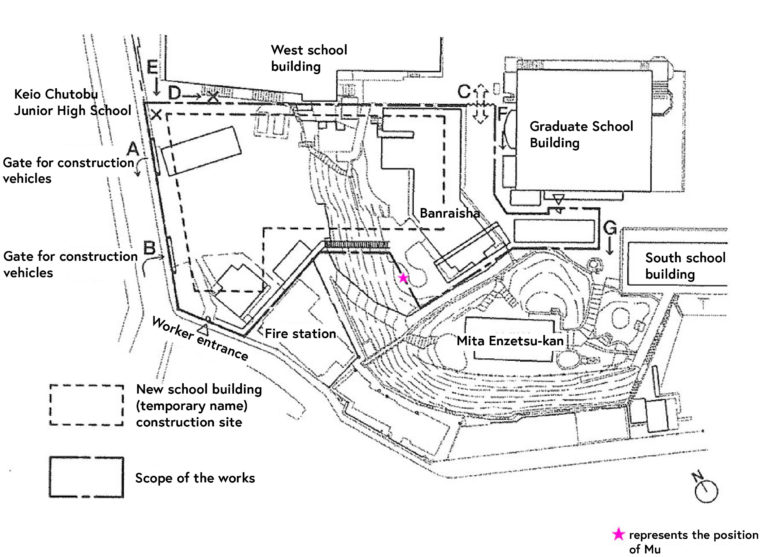 As shown in the drawing above, the Second Faculty Building—especially the Noguchi Room—extended outside the site of the new building. Numerous requests and proposals to preserve the Noguchi Room were made to Keio, and many mentioned the possibility of keeping the Noguchi Room and integrating it into the new building. In the end, only the portion of the Second Faculty Building housing the Noguchi Room, and the lobby with a spiral staircase, were cut out, and reconstructed on the terrace of the South Building. Also, only the direction that the current building faces is the same as it was in the original. (From “Construction of the New School Building at Mita” (in Japanese) featured in Issue 10 (March 2003) of the Keio University faculty magazine OPEN) Click to take a closer look 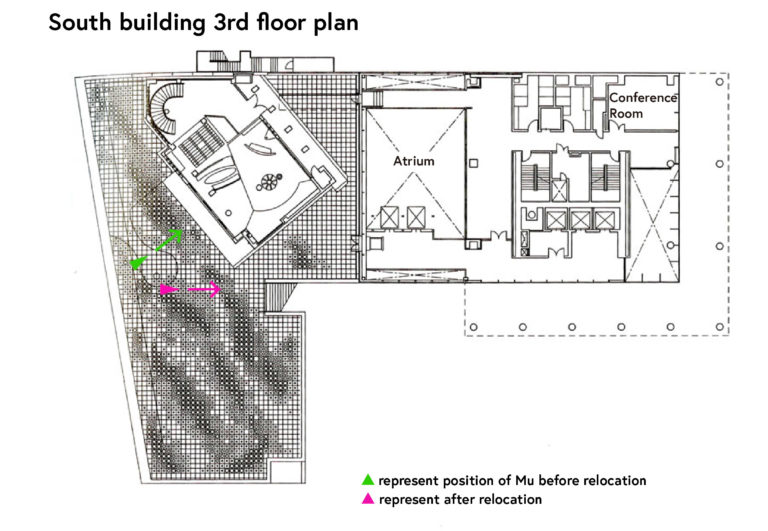 In the original plan, Mu was to be installed with a positional relationship as close as possible to the original, but in the final plan by Kengo Kuma and Michel Desvigne, the position and angle relative to the Second Faculty Building were altered. Perhaps due to the designers’ prioritizing the effect of looking up at Mu from the outer stairs connecting to the terrace of the South Building, the front side is oriented in that direction. Therefore, as will be seen in Step 1.12, later on the position seen from the interior is slightly shifted to the south side. For this reason, the spatial art relationships of the interior, sculpture, and gardens, originally envisioned by Noguchi, have been lost. Furthermore, Wakai Hito and Gakusei by Noguchi, installed in the gardens of the Second Faculty Building, were removed during demolition of the Second Faculty Building and construction of the South Building. At present, they can be seen in the first-floor lobby of the South Building.Click to take a closer look

In subsequent steps, we will consider the Noguchi Room and the Ex-Noguchi Room from various perspectives, and we’ll refer back to the above history as we do so.