Dissemination of paper and papermaking techniques

When was paper disseminated to the world? And how? Let’s trace the path of dissemination from its origin in China, to Western Europe, and on to America.

The world’s oldest currently extant paper is a map excavated at Fangmatan in Tianshui City, Gansu Province, China. This paper is thought to date from around 150 BC. Centuries later, techniques and materials for stably producing uniform paper were established by Cai Lun. And those techniques, using plants as a source material, became standardized and spread all over the world (fig. 1). 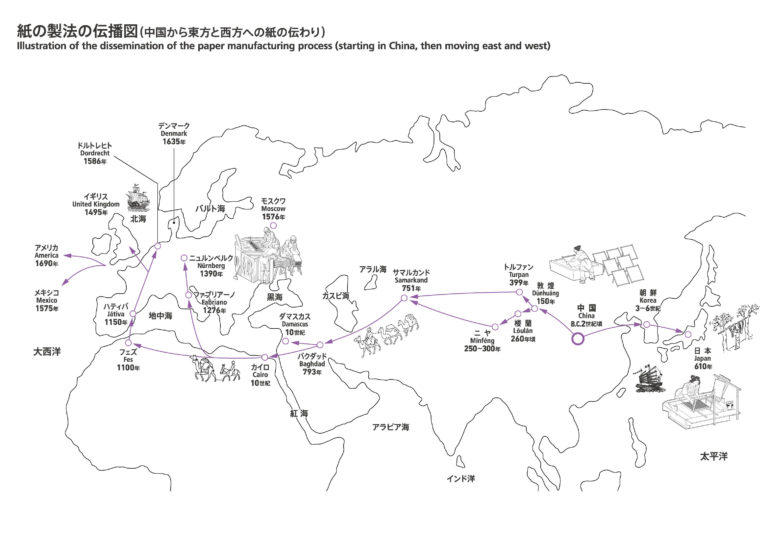 Paper made in China was an important export. Leaking information on papermaking techniques was forbidden, and the method was a closely-guarded secret.

Cai Lun’s papermaking technique was disseminated unchanged, but the plants used as raw material varied between regions due to differences in plant ecosystems driven by climate and latitude.

Paper made from moso bamboo (Phyllostachys edulis, fig. 2) appeared when books were first printed in China. Moso bamboo, the raw material of chikushi (bamboo paper), is fermented once before fiberization. This process is called “retting.”

Papermaking techniques were first disseminated to a country beyond the influence of China in 751, when a paper factory was established in Samarkand. It is said this was an outcome of the Battle of Talas between the Tang Dynasty and the Islamic Empire.

Samarkand was a center of textile production. It was easy to obtain raw materials and abundant river water flowed through the city. Thus, a paper factory was established in the area. Samarkand paper would subsequently maintain its status as high-quality paper in Europe, a fact even depicted in Against the Grain, a famous novel by Huysmans (French novelist, 1848–1907).

In Egypt, papermaking began from around the 10th century AD. Examination of Islamic calendars found in large amounts near Cairo in 1877 (currently part of the collection of the Austrian National Library) shows that papyrus was used until the 800s, but there was a shift to paper after 936. In the Islamic cultural sphere, the media transition from papyrus to paper occurred in less than 200 years.

In 1150, papermaking techniques were disseminated to Xàtiva, Spain in Europe. Extant records show that a paper factory was established in Fabriano, Italy in 1276. Papermaking techniques later spread to France, Germany, and other areas of Europe, and the Gutenberg 42-line Bible was printed on both paper and parchment. The source materials for papermaking in Europe at the time were mainly cotton and linen rags.

The papermaking techniques of Europe were then disseminated to the Americas. In 1575, a paper factory was established in Mexico, and more than 100 years later, in 1690, the first paper factory was built in the English colony of America (in what is today Philadelphia, Pennsylvania). The raw material at that time was rags, but when newspapers began to be published in high volume due to the American War of Independence, clothing-based raw materials could no longer keep up with demand. To secure paper materials for printing newspapers, newspaper companies advertised to collect rags.

As newspapers took on a more important role, printing speeds increased. Driven in part by an increasingly severe shortage of rag materials—in America and elsewhere in the world—manufacturing of paper from woody pulp took hold in Europe, and spread throughout the world.

Mass production of paper from woody pulp was made possible by the world’s first paper manufacturing machine, invented by Louis-Nicolas Robert of France in 1798 (fig. 3).

Model of the first Fourdrinier-style paper manufacturing machine in the world, invented by Louis-Nicolas Robert of France (Source: Paper Museum)

In this way, paper was disseminated while adopting new source materials in each region, and adapting technology to meet rising demand. 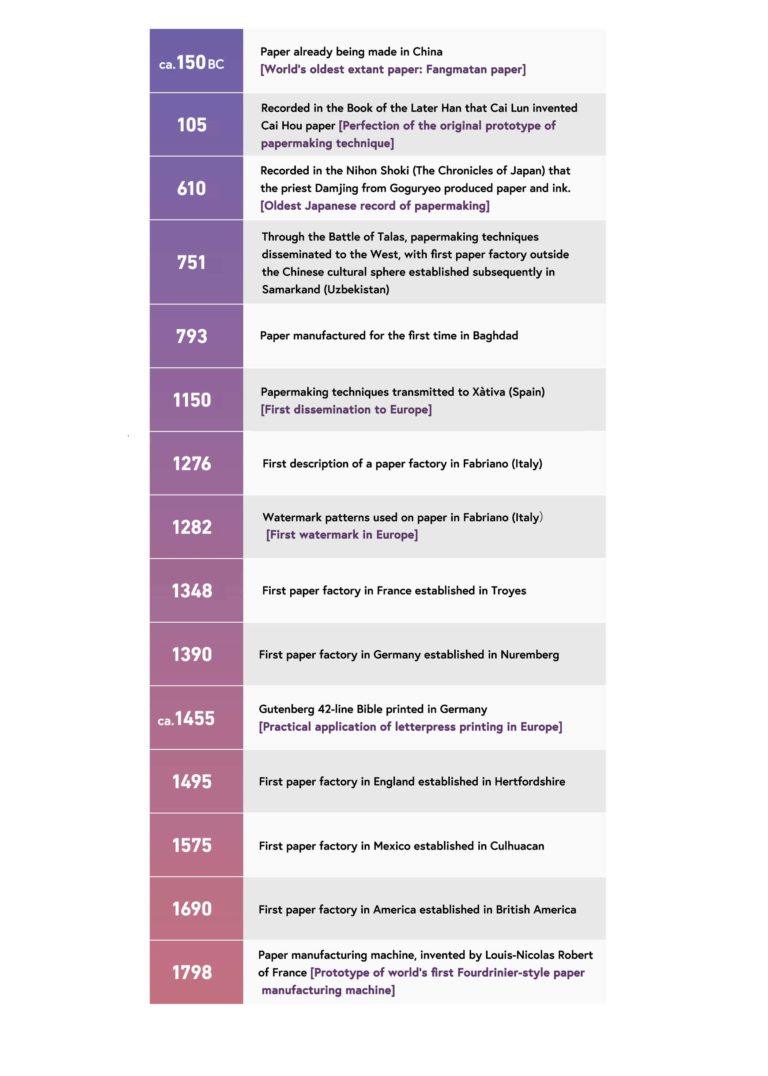