This article looks at the hierarchy of Japanese rare book formats, and how we can learn about Japanese culture through them. 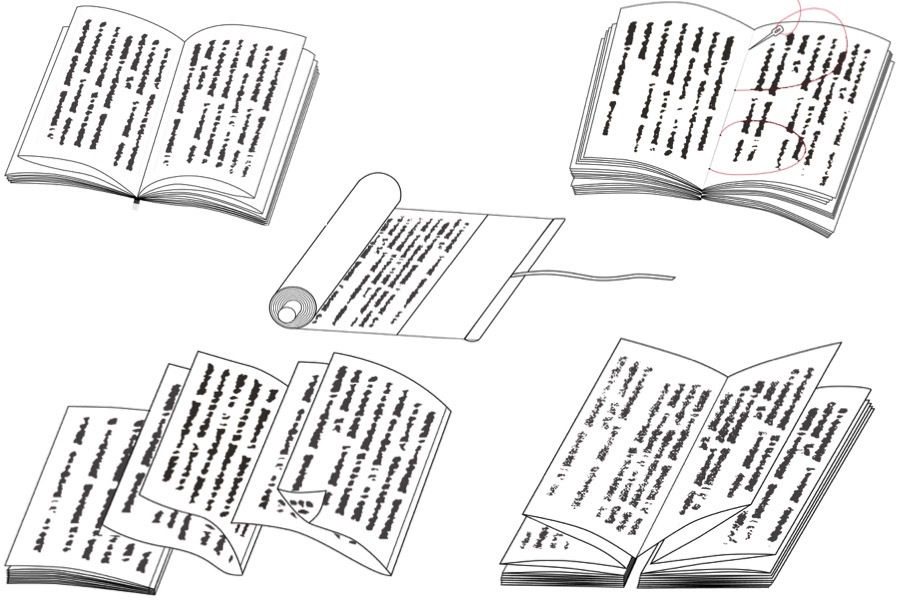 The scroll was considered the most desirable and prestigious of all formats. What about the other binding styles?

Scroll: the most prestigious format

The fact that books in almost any other format were rebound as scrolls show that the scroll was considered the most desirable and prestigious of all formats.

The golden age of rebinding was the Edo period. As it is unlikely that owners would have rebound their books as scrolls to diminish their value, the tendency to prefer scrolls shows pretty conclusively their preeminence in the hierarchy of book formats.

Moreover, the fact that books were almost never rebound as accordion-style books, despite the similarities between orihon and scrolls, shows that orihon was seen as something of a special case.

Considering the fifth of the conversions discussed in the previous steps (from fukurotoji to tetsuyōsō), it is also clear that the tetsuyōsō format was considered higher in status than the fukurotoji.

This may also be seen from the paper used in tetsuyōsō binding, which is of higher quality than that used in fukurotōji binding, but until now it had been overlooked.

The superior standing of the tetsuyōsō binding compared to the fukurotoji can also be seen from the so-called yomeiri-bon (trousseau books).

In Edo times, when a woman from a prominent aristocratic or warrior family got married, she was given a complete set of personal accessories, including a set of beautifully bound classic books. The paper of these books was of the very finest quality, as were the lacquered cases that they came in.

Significantly, despite the wide popularity of the fukurotoji format from the 17th century onwards, these sets were almost always bound in tetsuyōsō format.

As mentioned earlier, there are no examples of books converted to detchōsō, which indicates the format’s low popularity in Edo times.

Importance of recognizing if the format of a book was changed

It goes without saying that recognizing if the format of a book was changed at some point during its life is vital for textual research.

Suppose that a researcher failed to notice that what is now a scroll was once a less luxuriously bound book and that because of the undisputed prestige of the scroll format, he or she treated the book as the authoritative and most reliable version of the text it contains; obviously, the risk of errors and incorrect conclusions would be very high indeed.

If you’d like to learn more about Japanese rare books, check out the full online course from Keio University, below.