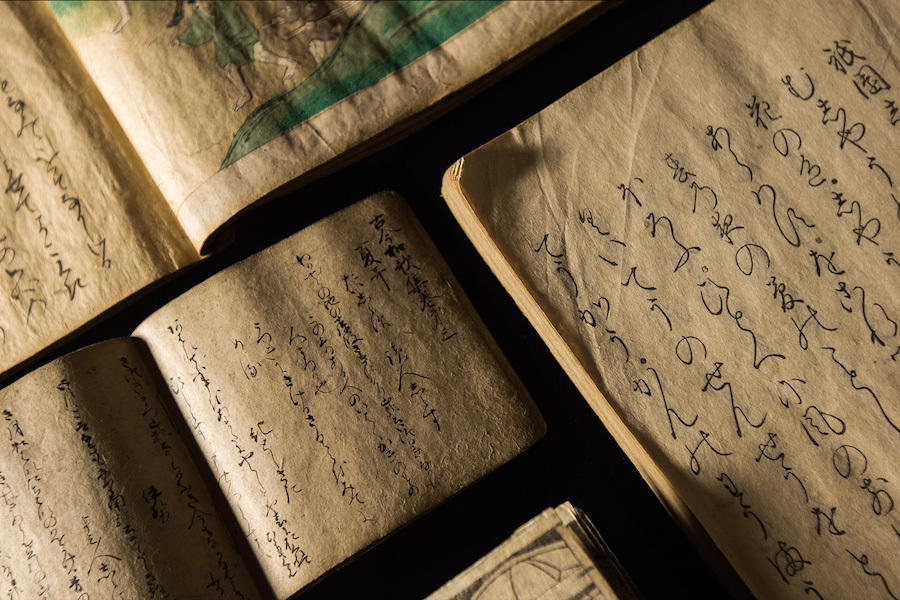 We hope you enjoyed this week’s activities. Here is a re-cap of what we have learned. Write any comments you might have in the comments section.

An obvious problem is that books were often rebound in a different format. Even precious ancient books were routinely rebound in a completely different format from their original one. Books were usually rebound to increase their value, so by looking at which books were rebound as what, we can learn a great deal about the social image and perceived value of different formats. Generally speaking, rebinding was unidirectional, from the less prestigious format to the more prestigious one. The fact that books in most other formats were rebound as scrolls shows the scroll’s privileged status. Indeed, traditional Japanese book culture cannot be understood without paying special attention to scrolls and how they were used.

The scroll, the most prestigious of the traditional book formats, was only for certain types of content. Chinese works and works in Chinese (and variants thereof) by Japanese authors continued to be bound as scrolls, the form in which Chinese texts had first been brought to Japan, but among kana works only the fairly prestigious waka and the mostly non-fictional historical tales (rekishi monogatari) were bound as scrolls; fictional tales (tsukuri monogatari) were not. This reflects both the Buddhist prejudice against fiction as a form of lying (one of the five major Buddhist sins) and the overall low social status of these tales at the time.

That waka and fiction had different standings in the genre hierarchy can also be seen from the different way in which titles were positioned on the cover. In waka texts, the title strip was placed in the upper left area of the cover, whereas in tales it was placed in the center. The upper-left positioning was standard in scrolls, so its placement there was probably meant to assert waka’s status was a scroll-worthy genre. By contrast, the center placement was probably meant to suggest that the content was unsuited for scroll binding.

There were also similar differences in how the different sizes of the tetsuyōsō format (one of the five main book-style formats) were employed. Waka works were usually bound in the rectangular yotsuhan (quarter) format, whereas fictional tales come mostly in the almost square mutsuhan-bon (sixth) format. (This also points to a difference in status between the yotsuhan-bon and the mutsuhan-bon.)

In addition to text, books can also contain images. Following Chinese custom, early Japanese illustrated books were mostly bound in scroll format. Even tales, which ordinarily would not have been bound as scrolls, were if they contained illustrations. Because of the strong associations between images and the scroll medium, illustrated book-type books did not appear in Japan until the 16th century.

The format used in the earliest of these books was the fukurotoji, which bears some design similarities with the scroll format. Once the illustrated fukurotoji books gained popularity, illustrated books also began to be bound in the less elaborate tetsuyōsō format (multi-section book). For about a century, throughout the 16th century, handwritten illustrated books in both scroll and book-style formats (known collectively as Nara ehon) enjoyed considerable popularity.

The origin of manga culture?

Differences of style and format notwithstanding, illustrated books have been continuously produced in Japan since the 8th century. Considering this long and rich tradition, it is hard not to see a connection between traditional illustrated books and the modern manga, for which Japan is famous today.

In week 1 and week 2, we have been focusing on the production of manuscripts (handwritten books). In the last week of the course, we will look at the print culture to find out how printed books developed and how it influenced society in the Edo period (1603 – 1868) including illustrated books. At the beginning of the 17th century, however, printed illustrated books made their appearance, some featuring rich, hand-colored illustrations. One key difference between handwritten and printed illustrated books is that images in printed books are usually surrounded by a border. The exact reasons for this stylistic innovation are unclear, but it may or may not be related to the influence of European books, which by this point had been circulating in Japan for some time.