Weather fronts are the boundaries between air masses. Watch Met Office meteorologist Alex Deakin demonstrate a front using a tank of coloured water.
View transcript
0
Weather fronts are the boundary between air masses. An mass is simply a large body of air that’s been sitting around fairly stationary for some time and as a result has gained the characteristics of where it’s been sitting, so for example air over the Saharan desert will be hot and dry whereas air over the Atlantic would be cooler and wetter. Where we get boundaries between air masses that’s a weather front, a cold weather front introduces colder air, and a warm weather front, behind that the air is warmer. I’m going to show you what’s going on in the atmosphere at a weather front now using this tank of water.
38.3
In the left here I’m going to add some cold, blue water and on the right some warm, red water. There’s a boundary in between the two and if I slowly lift this up we’ll just see what happens
66.4
Now you notice the air doesn’t just all mix together straight away, the colder denser air, or water in this case, digs in underneath across the bottom of the tank and the warmer, less dense air rises and drifts to the left and this is what happens at a weather front. Imagine now we had a westerly wind and this cold front was therefore moving eastwards, the colder air digging in beneath the warmer air means that the cold front is sloping backwards Whereas if it’s an easterly wind the warm front is drifting its way westwards and it’s forwards sloping

A front is the boundary between air masses. They were named in 1919 by Bjerknes, a Norwegian meteorologist, who thought of a front as a battle ground between two opposing air masses, probably because the First World War had just finished.

There are three main types of weather front.

A cold front is represented on a synoptic chart as a blue line with triangles. When synoptic charts were first drawn up, they were printed in black and white, so the triangles were used to symbolise icicles. The presence of a cold front means that cold air is advancing and pushing underneath warmer air. This is because the cold air is ‘heavier’, or more dense, than the warm air. Cold air is thus replacing warm air at the surface. The tips of the ‘icicles’ indicate the direction of movement of the cold air.

A warm front is symbolised as a red line with semicircles. The semicircles can be thought of as half suns. The presence of a warm front means that warm air is advancing and rising up over cold air. This is because warm air is ‘lighter’ or less dense, than cold air. Warm air is replacing cooler air at the surface. The edges of the ‘suns’ indicate the direction of movement of the warm air.

An occluded front is symbolised on a weather chart as a purple line with both semicircles and triangles. These are slightly more complex than cold or warm fronts. The word ‘occluded’ means ‘hidden’ and an occlusion occurs when the cold front ‘catches up’ with the warm front as it moves more quickly than a warm front due to the weight of the dense, cold air behind it. The warm air is then lifted up from the surface, and therefore ‘hidden’. An occlusion can be thought of as having the characteristics of both warm and cold fronts.

Because warm and cold air meet at a front, the less dense warm air is forced to rise, this air then cools, water vapour condenses into water droplets, and cloud is formed. So we associate fronts with lots of cloud. The strength of a front, and therefore the amount of rain we get on a front, depends on the temperature difference between the air masses that they separate. In a similar way to jet stream being strengthened by temperature gradients, so too are fronts. Fronts slope through the atmosphere, a forward slope (from left to right) in the case of warm fronts and backwards (right to left) in the case of cold fronts. 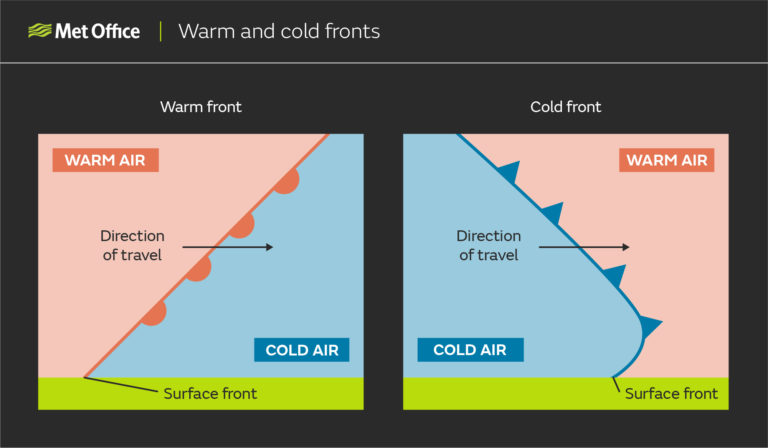 These slopes mean that we can often see high cloud spilling way ahead of a warm front. 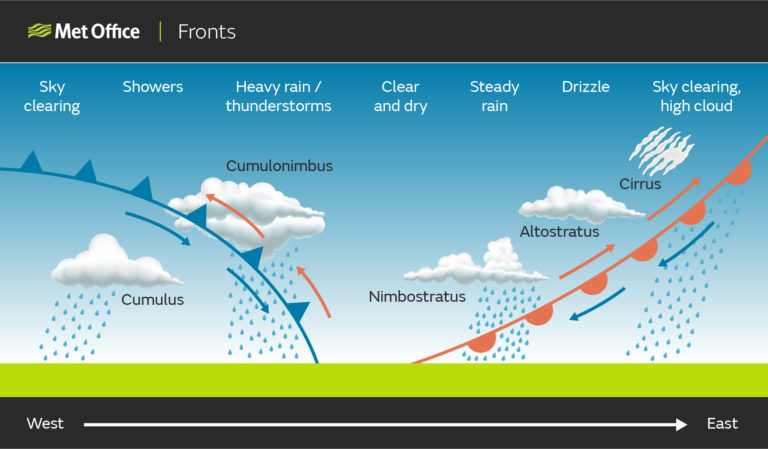 Cloud associated with a warm front and cold front. (More about clouds and their names and types next week)

If you’d like to have a go at representing fronts yourself, there’s a worksheet to accompany the video in the files section below.