This Met Office video explains the striking effect of Foehn winds and introduces some of the major winds around the globe like the Shamal and Mistral.

When air passes over mountains, the valleys on the downwind side (or ‘lee’ side) often experience strong and gusty downslope winds accompanied by abrupt warming and drying. These are known as foehn winds, and their warming and drying effect – the foehn effect – can be striking and far-reaching. Their notoriety has led to their recognition and naming across the globe including: the Chinook or “snow eater” of the North American Rocky Mountains; the Zonda of the South American Andes; and the Helm wind of the English Pennines.

On 14-15 January 1972 in Montana, USA, a foehn Chinook event was responsible for the greatest temperature change over a 24 hour period ever recorded in the United States: according to the US National Weather Service the temperature rose a staggering 57 °C; from -48 to 9 °C.

In the UK, the most notable foehn events tend to occur across the Scottish Highlands where the moist prevailing westerly winds encounter high ground along Scotland’s west coast. This results in a marked contrast in weather conditions across the country with the west being subjected to wet weather, whilst the lower lying east enjoys the warmth and sunshine of the foehn effect.

The warmth that a foehn wind brings can increase the risk of avalanches in ski resorts. Foehn windstorms regularly cause damage to property and infrastructure, and are a serious hazard to climbers – most notoriously so on the Eiger’s north face. The combination of warm, dry air and high wind speeds promote the ignition and rapid spread of wildfires.

Explanations of the foehn effect often single out just one causal mechanism (#1 in the below diagram), but there are in fact four known causes. These mechanisms often act together, with their contributions varying depending on the size and shape of the mountain barrier and on the meteorological conditions, for example the upstream wind speed, temperature and humidity.

There are four mechanisms which combine to create the foehn effect: 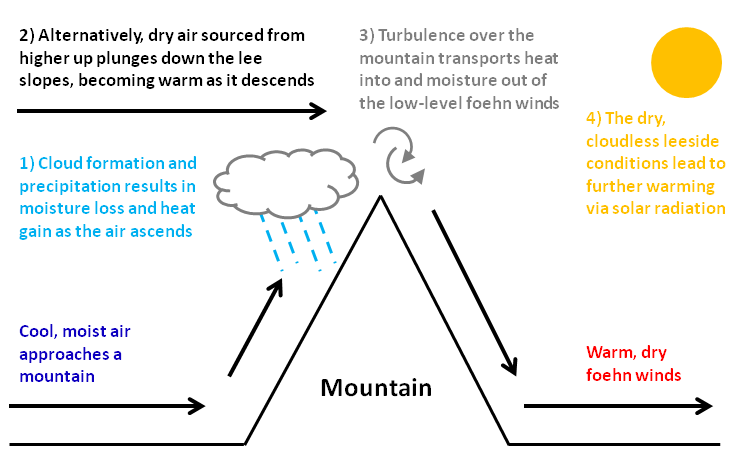 If you would like more information about the Foehn effect, have a look at our learning pages.

Low pressure systems, or wind storms, can cause destruction in the garden. Two storms of equal strength and wind-speed have the potential to result in different amounts of damage at different times of year.

In the winter, a storm is less likely to be impactful for a number of reasons, in part due to the fact that deciduous trees will have lost their leaves, thus allowing the strong wind to blow through.

The same wind strength in the summer, when the trees are in leaf, means that branches and even trees themselves are more likely to come down, with the leaves acting like sails and catching the wind. Impacts are also likely to be greater in the summer as more people will be out and about; at events, on holiday, on the roads, and in the garden. 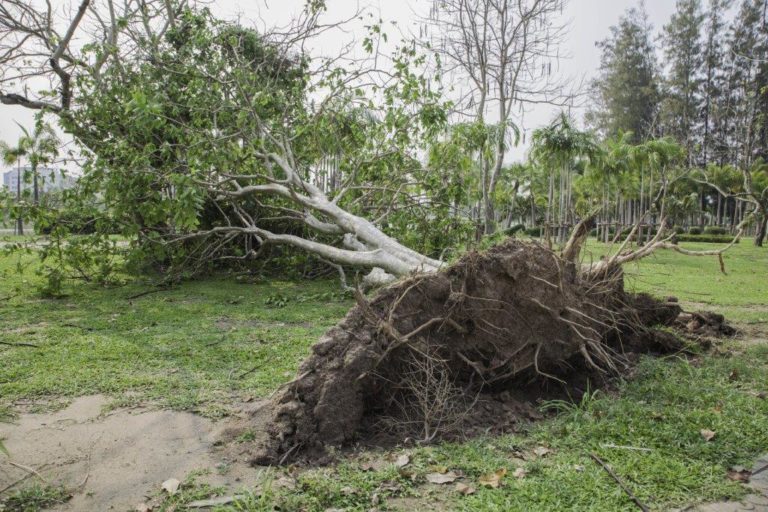 In preparation for a wind storm, the best thing you can do in your garden is to make sure anything that could be moved or blown over by the wind is tied down or put away in a shed or garage. Be aware of what wind speed to expect by keeping up to date with the forecast, as well as the wind direction so you can be aware of the parts of your garden that will be most vulnerable, and when exactly to expect the strongest winds, so that when the storm has passed, you can go out to inspect and repair any immediate damage.

On average, the wind speed doubles at 900 m compared to low ground, and the overall wind-chill effect on a wet or perspiring human body can be very large indeed. A wind of 40 mph and an air temperature of 3 °C, not at all an uncommon combination even in summer, will give a wind-chill temperature of -10 °C. A 30 mph wind will be difficult to walk in, with progress being slow and more energy required. In a 40 mph wind, you could be thrown off balance and normal walking will become extremely difficult. Mountain ridges are exposed and should be avoided in strong winds.

Cols and valleys often have much stronger winds than you might expect, as the air can be funnelled with the hills acting as barriers. There are a few places in the UK that have names associated with the wind. Windy Gap in the Lake District lies between Great Gable & Green Gable. It’s a classic col that has an open westerly aspect, which is the prevailing wind direction, so the wind speed is often much higher than might be expected, due to the funnelling effect.

In stormy conditions, seas can become rough, and this can create interesting photographs.

This is most likely to happen when deep areas of low pressure approach the UK from the Atlantic, but can occur in any windy conditions. If the wind is blowing on-shore, so the wind direction is from the sea towards land, waves are likely to be blown out, whereas if the wind if off-shore, waves will tend to be cleaner.

However, don’t get too close to the coast when seas are rough, they can be unpredictable and dangerous, always keep a safe distance.