Why we tell stories

Why do we tell stories? In this article, we explore the innate human need to tell stories and how we can harness this in modern day. 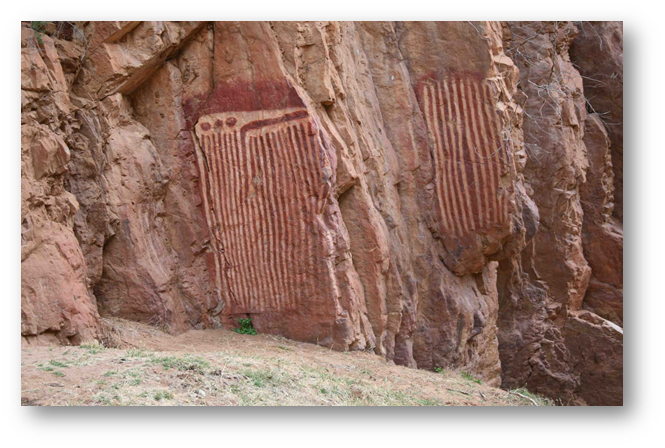 The MacDonnell Mountain Range – a four hundred mile stretch of towering red stone and dramatic gorges – dominates the landscape around the Northern Australian town of Alice Springs. It is also a cinema screen… of sorts.

For the Aboriginal tribes of the Northern Territories, the mountains are a physical memory of the Dreamtime, the period before recorded history when the Spirits shaped the land and created the people.

Aboriginal drawings, carved into the stone-like images from a projector, capture the story of a titanic original battle between the giant caterpillars, or Yeperenye, who formed the region around Alice Springs, and their enemies the Stink Bugs (the picture at the top of this page captures this Aboriginal art – and is taken from a film shot by Ed Braman). The MacDonnell Mountains are the fallen bodies of those caterpillar spirits and the rock continues to tell the Yeperenye story into the present.

It may seem strange – even something of a stretch – to suggest there is some form of link between rock paintings that capture the dreams of Aboriginal pre-history and the sort of technical sophistication that fills the cinema screen with the climactic epic battle of Avengers: Endgame (2019), the intricate plotting and gameplay that distinguishes Black Mirror: Bandersnatch (Netflix, 2018), or the user ingenuity that drives web series like Star Boyz on YouTube. But linked they are: by the common need, throughout human history and across human cultures, to tell stories.

Behind the breathtaking special effects of Endgame is a story about loyalty, duty, the importance of family, about sacrifice and what it means to be a hero, about the value we place on our planet and the collective imperative to defend it, and human life. Big and important themes that – spoiler alert! – give indelible meaning to Captain America’s return to a lost love after his job as a hero is done, or Hawkeye’s descent into violence to redress the balance against evil.

The story, or stories, of Endgame are only in part about their labyrinthine plot events – what will happen next? How will they overcome that puzzle? – entertaining as they are. Its story is about the meaning of those events, what they tell us about the underlying shape of our world, about our hopes and fears and where our actions might lead. They seek to make sense of what it is to be alive, just as much as our Aboriginal ancestors looked out onto the vast empty spaces of northern Australia and gave sense and purpose to the landscape, and their place within it, by projecting their story of a foundational battle.

And the MacDonnell rock paintings are an important reminder about how we will tell stories, as much as what we tell. Surrounded as we are with powerful new technologies – the internet, interactivity, special effects, virtual reality, the seemingly endless potential of the digital revolution – it’s tempting to get carried away, to focus on what we can do, rather than why we do it. In the early days of cinema, the Lumiere Brothers built a business by simply exploiting what their new technology could do: audiences were captivated by the simple fact that the arrival of a train, or workers leaving a factory could be captured on camera.

But audiences soon tired of technical innovation alone and demanded shape, meaning and edge-of-the-seat entertainment, turning first to the fantasies of Georges Méliès, and then of course to the increasingly complex, character-led narratives of Hollywood. In some key respects, the history of screen storytelling has been about harnessing the seductions of technical innovation to the human simplicity of telling meaningful tales.