How can that be? It turns out that the assumption that driving faster will get us where we are going quicker is flawed, and not just because of the standard concerns about increased risks of an accident.
© Tim Dare, University of Auckland

A lot of effort goes into convincing motorists not to speed, especially around holiday periods. Mainly we try to show that speeding can have bad consequences, from the cost and inconvenience of getting ticketed all they way through to injury and death.

But there is another reason not to speed that doesn’t get much coverage, and that should convince everyone that once they are travelling above rather low speeds, accelerating even more doesn’t make much sense.

Does Speeding Save Time?

How can that be? It turns out that the assumption that driving faster will get us where we are going quicker is flawed, and not just because of the standard concerns about increased risks of an accident.

A 10km trip at 10kph would take an hour. The same trip at 20kph would take half an hour, a quite dramatic time saving. If we are interested in saving time – in getting where we are going more quickly – perhaps it makes sense to travel at 20kph rather than 10kph if we can.

Suppose we speed up to 30kph? Now our 10km trip will take 20 minutes. Travelling at 30kph means we get where are going 10 minutes earlier than travelling at 20kph: perhaps that will seem worthwhile too.

Well, suppose we accelerate to a heady 40kph? Now our trip takes 15 minutes. Traveling at 40kph rather than 30kph means we get to where we are going 5 minutes earlier.

The trend is constant, and by the time we get to the speeds we are likely to be interested in, the time savings are tiny. Travelling 10km at 90kph rather than 80kph saves us only 54 seconds, and at 100kph rather than 90kph only 42 seconds!

Of course the longer the journey the more time we save. The 10km figures are ten times higher over 100km, but still the time saved by travelling at 100kph rather than 90kph over 100km is a paltry 7 minutes. 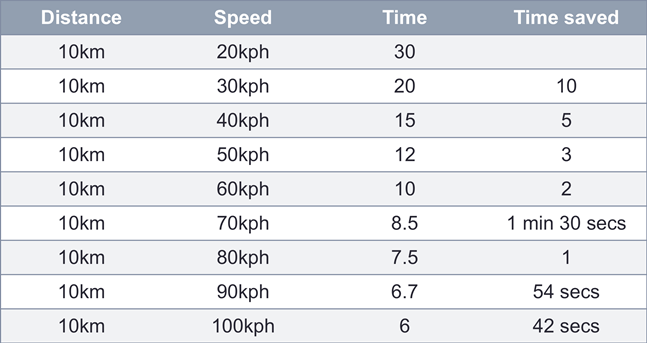 It turns out that the common, almost universal, assumption that we will get to where we are going more quickly if we travel at higher speeds is, if not false, at least much less significant than we might have imagined.

Once set out this seems obvious. Why do we persist in thinking travelling at higher speeds will make a significant difference to journey times? The tendency to overestimate the time saved by doing tasks more quickly is called the ‘time-saving bias’, and it is one of a cluster of common reasoning errors all humans are inclined to make. Even people who are perfectly ok with basic maths tend to judge things like probability and how much time we save if we travel faster on the basis of ‘first impressions’ rather than calculation.

We tend to judge the likelihood of something happening, for instance, by seeing how readily an example of that thing comes to mind, by how ‘available’ it is to us. Availability may be a pretty good guide to probability: more common things should come to mind more readily than rare things.

But things readily come to mind not only because they are common but because they are striking, because we have just seen an example on the news, or because we have some particular reason to care about that thing. People think plane crashes and terrible sporting accidents are more likely following a high profile example, and parents overestimate the probability of side-effects from vaccinations because they have an understandable concern about them: they come to mind more readily than they should given their actual probability.

There is often a good reason for using these ‘heuristics,’ as they’re called. They are quick and fairly reliable and – assuming many of them have their roots in the early evolution of our cognitive capacities – they probably worked in the environments in which we evolved. Being able to readily bring to mind food when we contemplated an environment might have been a pretty good way of estimating the probability of finding it there, and if the availability heuristic occasionally led us to overestimate the likelihood of running into a sabre-tooth tiger, that may have been no bad thing.

The Time-Saving Bias and Other Reasoning Errors

But it is clear that these ‘quick and dirty’ reasoning strategies can also lead us astray. Obviously it’s good to avoid these common reasoning errors. It helps us develop true beliefs and reject false ones. But it also has practical benefits. In the driving case, it should lead us to see that driving faster delivers almost no benefits. Once we see that we should feel less frustration when meeting slower drivers and reduce the risks of accidents or encounters with traffic patrols.