The science of mitochondrial donation

This interview with Helen O'Neill at UCL, covers the topic of mitochondrial donation, what is sometimes called three-parent embryos.
View transcript
0
One of the fascinating things about assisted reproductive technologies is that we are constantly bending biology to work in our favour and every step of that process to try and create life outside of the mother is another hurdle, which we jump over and is going beyond what would every have been allowed in a natural setting. So we’ve talked about, giving hormones to a woman so that she produces more than one egg in a given cycle. Then taking this egg and fertilizing it with the sperm which may or may not have been capable of fertilizing anything in the natural setting. And then growing this fertilized embryo in a dish.
47
And we are constantly improving the ways in which we accommodate these progressions but we are also continually manipulating and pushing that barrier further and further. An example of which is to take a cell from that developing embryo to test it for any genetic disease as we learned about in the PGD module. It is very easy to think of an embryo of being a little human but, at this point it is really a clump of cells. So it is quite fascinating to think that this clump of cells can endure a needle coming in and taking one of its very valuable cells for testing.
93
but then human embryo is very robust, and one of the fascinating things is that we are learning more and more about human embryology but the question remains is, what have we left to learn? And there is actually a lot left to learn. Much of what we already know about the earliest beginnings of human development we have learned from looking at other animal species. For example, a mouse embryo closely resembles that of a human embryo in its beginnings. And this has enabled us to do much of the research needed to enable IVF and all of the procedures that we do now.
132
However, it only takes us to a certain point it is less ethically challenging to create life for research if you are doing it with an animal. It is more of a challenge to say if we truly want to know about early human development we must begin the process of in-vitro fertilization and continue it not with the view of having a child. And I think that if we try and understand that there are huge species-specific differences then we get an insight into the fact that we know very little about some of the key processes of the point at which pregnancy occurs, i.e. the point at which this embryo implants in the uterus of a woman.
187
An exception for where an embryo is created for the purpose of research was when studying mitochondrial disease and a law was passed in 2015 to enable, so called 3 parent DNA. Now it is called 3 parent DNA but really this is a misleading term. The reality is a child that was produced from mitochondrial donation would have the 20,000 genes from its mother and father and solely 0.2% of its genome from the donated mitochondrial donor. So it is misleading as a term but I can see where people get that expression. Assisted reproduction till date has been used to treat or overcome the disease of infertility. But what about treating other diseases?
243
So we can use the same principal technologies used for assisted reproduction and try and overcome other diseases. The example I just gave was with mitochondrial DNA and how we can take an embryo that has a corrected, not a corrected, but an un-mutated copy of a genome to supplement the beginnings of life in a couple that would ordinarily have a severely affected child. New technology is now working towards genetic engineering where we are not just compensating to cure, we are actually correcting to cure. CRISPR is a new technology which has allowed such editing. How it works is to mimic the immune system that bacteria use.
307
Where we produce an immune response that fights off invading bacteria bacteria recognize foreign invading sequences and chop them up. So when they do this they integrate the genome of an invading virus or particle into their own genome. Thereby rendering themselves immune. In using this technology to cut DNA and insert other pieces of DNA we can manipulate this incredible molecular machinery to work in our favour to cut out mutated copies of genes and replace them with correct sequences. CRISPR is a game changer because while the human genome was sequenced and we had this abundance of information the ways in which we could manipulate it to find out what all of these sequences meant were a little bit more cumbersome.
372
This has enabled us to edit and do gene function studies to a much bigger capacity. And it’s fast-forwarded what we would have been doing before. I think the application of it for treatment in the future will be huge. Rather than curing a disease or curing a mutation by compensating for something that somebody cannot produce or a mutation which causes a protein to not be expressed we are curing by correcting that disease. So, we could one day live in a world where rather than treating disease we prevent it before it begins.

Mitochondria are small structures that are located inside nearly every cell of the body. They are often referred to as the powerhouse of the cell as their primary role is to produce the energy that the cell needs to function.

Mitochondria contain their own small piece of DNA that is transmitted by from mother to child. Mutations within this mitochondrial DNA can lead to mitochondrial disease, which is not uncommon and can be devastating.

Mitochondrial disease can occur at any age, with a wide range of clinical symptoms typically more severe in infants and children.

Several organs or tissues can be affected but it is usually those with the highest energy demands, such as the brain, heart and muscles. Deafness, diabetes and epilepsy are examples of conditions that can result from mutations to mitochondrial DNA.

There is no cure for mitochondrial disease and the variability in genetic defects and disease severity makes it challenging to manage these types of diseases. This is why preventing transmission from a mother to a child is so important.

The process of separating the patient’s healthy nucleus from defective mitochondria, and fusing it with healthy mitochondria from the donor is shown in the below diagram.

The steps of mitochondrial donation 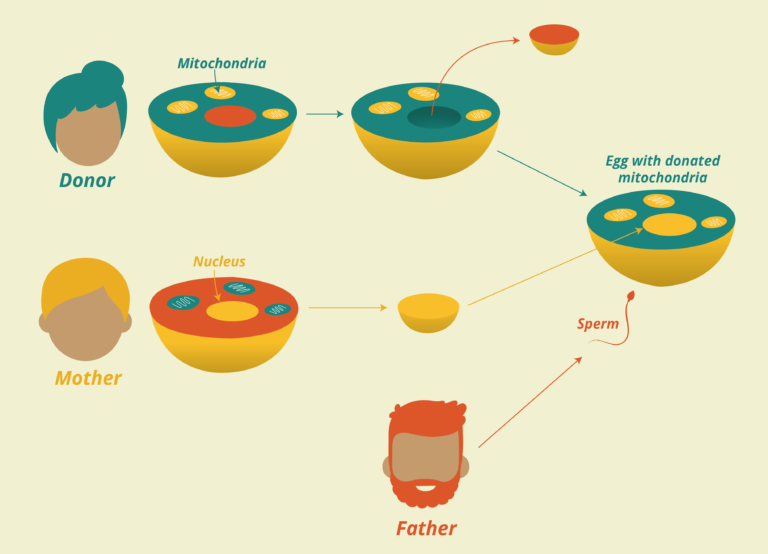 Dr Helen O’Neill is a scientist and a teaching fellow at UCL’s Institute for Women’s Health. In this interview, she explains why mitochondrial donation is such a useful technique, not just to avoid disease, but to help us understand the genetics that underlies human development.

For your discussion: Mitochondrial DNA makes up less than 0.2% of our body’s total DNA, yet that hasn’t stopped many people naming the outcome of this technique ‘three-parent embryos’. What do you think of this term?