Learn what happens when maternity care providers do not collaborate or communicate well. What is the impact on women and families? 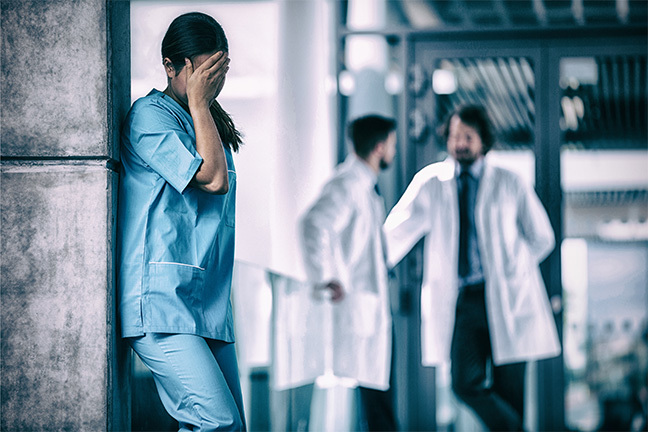 In an ideal maternity care system, all health professionals involved collaborate using their different areas of expertise as and when needed during the pregnancy, birth and postpartum period.

The hope is that care will be provided within a system that promotes and endorses interprofessional trust and respect. Processes need to be in place to ensure all aspects of the woman’s care are communicated effectively between different care providers. The woman needs some choice around where and when she is seen and by whom.

As we saw in Janet’s story, in most contemporary maternity systems, however, the reality is a far cry from this. In many cases caregivers (mainly midwives and doctors) see the woman at a time determined by them, not the woman. They perform the task in hand, document what they have done and pass the woman onto the next person. The next person may choose to endorse, ignore or refute the care planned and advice given by the previous carer, leaving the woman not just confused but potentially at risk of harm.

This lack of communication and collaboration between caregivers can be the unintended consequence of providing care in a system where caregivers have no ongoing connection to the woman. In systems like this where no one healthcare provider is aware of and leading a woman’s pregnancy and birth care – referring and consulting with other members of the maternity care team as needed – it is likely that vital aspects will be missed; important information won’t get passed along.

It’s not just information from the woman to her care providers that is challenging in a system that lacks collaborative care. When maternity care providers share conflicting information or demonstrate contradictory views about birth, a woman’s sense of safety – of having a ‘safety net’ – is diminished. Too often in these circumstances the woman feels caught in the middle of an apparent ‘turf war’ between midwives and doctors who appear to be pushing their own agenda – attacking each other and losing sight of the woman’s unique needs – leaving the woman feeling uncertain, alone and fearful. Janet, for example, described feeling isolated.

When care is fragmented, when healthcare providers don’t connect and don’t work together, the people who suffer the most are the women, babies and families for whom care is provided – no matter how positive the intentions of everyone involved.

Lack of collaboration and poor communication are frequently identified as major contributing factors to poor outcomes in health care. There are many examples from independent investigations and reviews into maternity care that clearly identify lack of respect and poor collaboration between different health professionals as root causes of why ‘things went wrong’. (Cantwell, et al, 2015.)

Frequently, the lack of effective communication between healthcare providers, and underlying professional rivalries lead to the lack of collaboration, which in turn resulted in poor outcomes, including deaths of women and babies during childbirth. Despite knowing what’s at stake, the ‘turf wars’ between midwives and doctors continue to exist.

There are layers of complexity in the internal dynamics of the ‘turf wars’. Although all maternity care providers ultimately seek the same outcome – a healthy mother and child – the understanding of how to achieve that (as well as what ‘healthy’ means) may differ. There’s a lot at stake:

Care providers often want to hold onto their own ‘turf’ instead of working together in complementary roles to achieve the best outcomes in birth. And when people aren’t talking to each other with the best interests of the woman at heart, everyone suffers.

Especially the woman and baby who are at the centre of maternity care.

Relationships are the key to improving outcomes in every aspect of maternity care.

What do you think is the key factor in the breakdown of collaboration between healthcare providers in maternity care?

How can it be resolved?