Introducing the Lancet Series on Midwifery

In this video, the background and central findings of the Lancet Series on Midwifery is discussed. Their key finding, based on decades of research in maternity health care, is this:

Midwifery is a vital solution to the challenges of providing high-quality maternal and newborn care for all women and newborn infants, in all countries.

With midwifery at the core, the Lancet Series determined that strengthening relationships between all key players in maternity care is vital to saving lives and transforming maternity care globally. In addition, some powerful conclusions were drawn:

…A focus on facility-based and emergency care can result in a reduction in maternal and perinatal mortality. However, without the balancing effect of the full spectrum of midwifery care, this strategy has also resulted in rapidly-growing rates of unnecessary and expensive interventions, such as caesarean sections, and inequalities in the provision of care and outcomes.

The diagram below outlines the Lancet framework for quality maternal and newborn care: that is, components of a health system needed by childbearing women and newborn infants. You can see how there are components of maternity care that all women and infants need, and some additional things that only certain women or babies require. 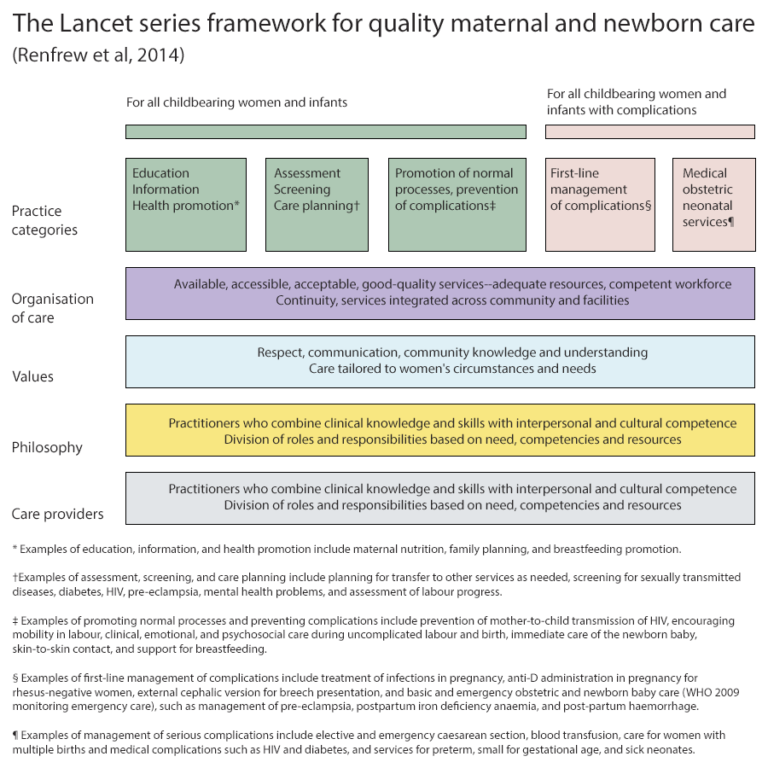 You can download both the diagram and a text version below in the Downloads section.

The Executive Summary of the Lancet Series on Midwifery gives more detail on how and why the Lancet framework was developed. Have a look and share your thoughts.

Was there anything in the summary that surprised you? What new things did you learn?