This is a glossary of mathematical symbolism. 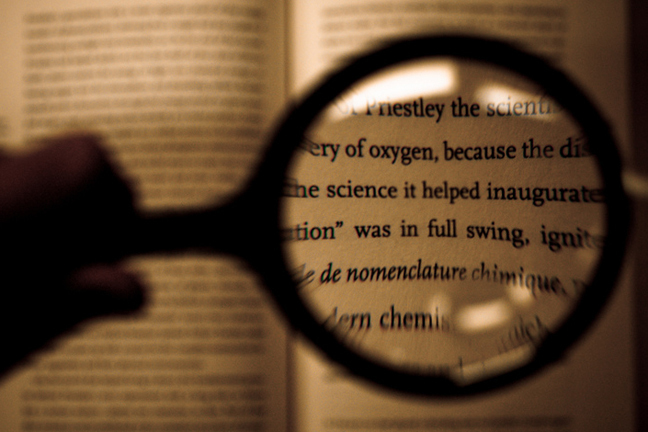 You will find here a glossary of mathematical symbolism.

This content is taken from
Loughborough University online course,

The plural of axis. 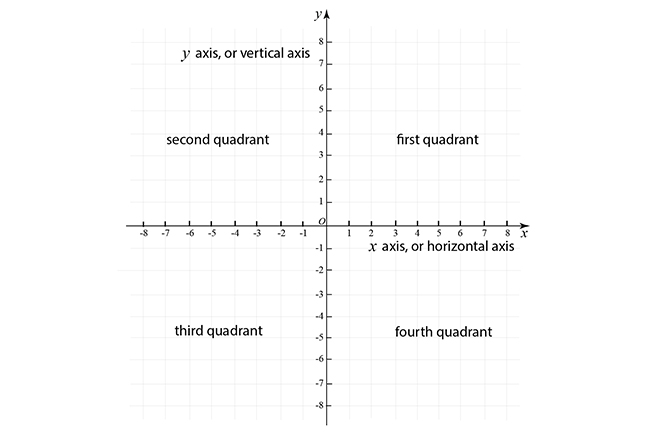 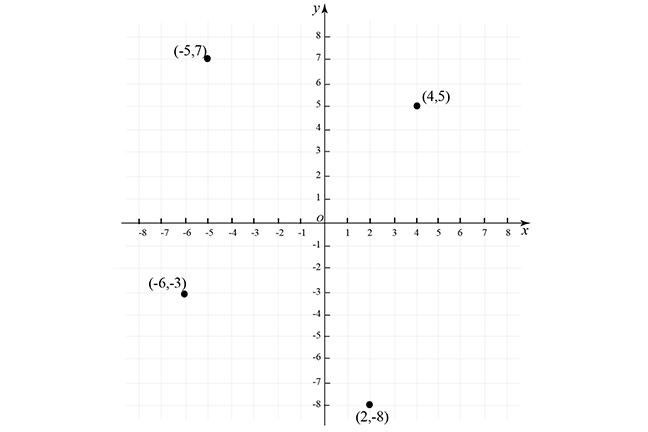 A constant is a number which remains unchanged throughout the course of a mathematical problem. If the value of a constant is specified at the start, then the constant will always have that value within the context of the problem being solved.

In the equation (y = mx + c), the values of (m) and (c) are constant. The term (c) is often referred to as the constant term in the equation.

In this course, a pair of numbers, written in the form ((a,b)), which specify the distance of a point from the axes. The magnitude or size of the number (a) gives the distance from the vertical axis. The magnitude or size of the number (b) gives the distance from the horizontal axis. If (a) is negative then the point is to the left of the vertical axis. If (b) is negative the point is below the horizontal axis. In more advanced work, other coordinate systems are possible (see Cartesian co-ordinates, above).

Current in a circuit

In electrical engineering, the current in a circuit refers to the rate at which charge is flowing through the circuit.

A curve is an object rather like a line, but which is not necessarily straight. (See Straight Line.)

In an equation of a straight line (y = mx + c), the variable (y) is referred to as the dependent variable because its value depends upon the value which has been chosen for (x).

Differential calculus is that branch of mathematics concerned with the rate at which a quantity changes. In physical situations variables change and it is often important to know how quickly change is occurring.

This is a measure of how much ground has been covered by an object during its motion.

Equation of a line

In this course, the equation of a line is given by (y = mx + c). This is a mathematical expression which contains information about the slope of the line and where it cuts the vertical axis. This information is sufficient to specify the line completely within a given plane.

Gradient of a line 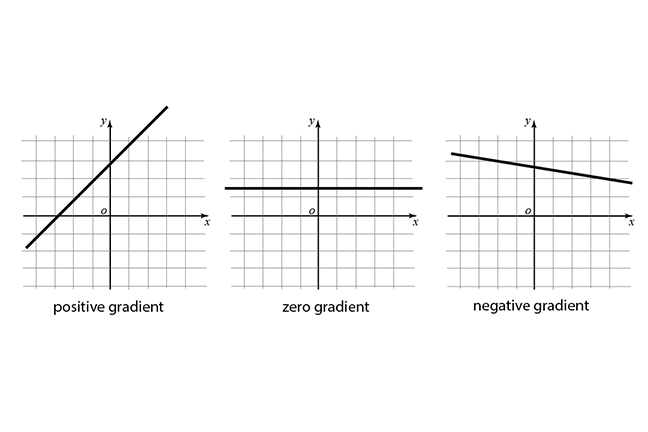 The graph of a line is a pictorial representation of the line. Usually it will comprise the horizontal and vertical axes appropriately labelled and a drawing of the line itself.

An experimental law attributed to the English scientist Robert Hooke (1635-1703) who discovered that under certain conditions the extension in a stretched spring or piece of elastic is proportional to the weight or load applied to cause the stretching. Equivalently, the tension force in the spring, (T), is proportional to the extension, (e), and so Hooke’s law can be written (T = ke) where (k) is a constant called the spring constant.

A straight line running from the left of the page to the right (often called the (x) axis).

In this course a line is a straight line. Two distinct (or different) points in the plane of the paper are sufficient to specify a straight line which passes through them.

Linearisation refers to the process of approximating a non-linear relationship – one for which the graph would be a curve for example – by a linear one. Linearisation can simplify analysis and is the basis of differential calculus.

Linearity refers to a relationship between variables which can be represented by a straight line. Whilst this might sound simple, the concept of linearity is fundamental to the study of vast areas of mathematics.

The mole is a unit of measurement used by chemists to express an amount of a chemical substance. The mole is one of the SI base units.

An experimental result attributed to the German physicist Georg Simon Ohm (1789 – 1854) who discovered that under certain conditions the voltage across an electrical component called a resistor is proportional to the current flowing through it.

The location in the plane where the horizontal and vertical axes cross. The origin has co-ordinates ((0,0)).

Periodicity refers to a characteristic of a graph wherein a pattern repeats regularly. A graph consisting of a repeating pattern is said to be periodic.

Two straight lines are perpendicular if they intersect at right angles – that is at (90^circ).

In this course you can think of a plane as the piece of paper upon which you are writing and drawing graphs. A plane has two dimensions. Another way of thinking about a plane is that it is a flat surface, and any two points on the surface can be joined with a straight line which lies entirely on the plane.

A point is a specific location in the plane.

A scatter diagram or scatter graph is a way of graphically representing data using Cartesian co-ordinates. Drawing a scatter diagram is usually the first stage in carrying out a regression analysis to explore the relationship between a pair of variables.

Slope of a line

In everyday life, speed is the distance travelled by an object per unit of time. Mathematically, speed is the magnitude of the velocity. When specifying the velocity of an object, in addition to speed, we should also specify the direction of travel. Thus velocity is referred to as a vector quantity whereas speed is a scalar quantity. 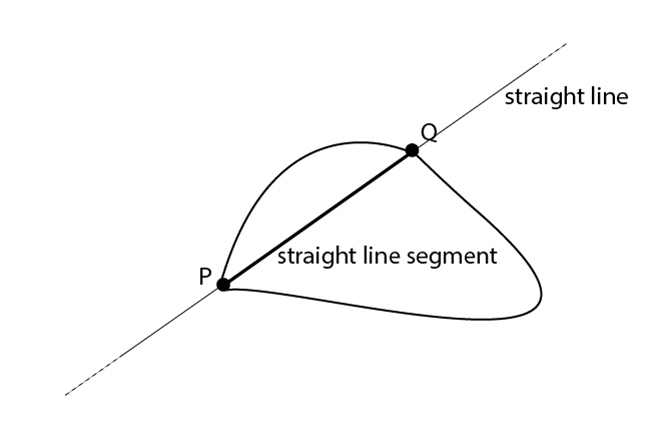 Strain is a technical term related to the extension which is caused when a material is stressed, for example compressed or stretched. It is often given the symbol (epsilon). Strain is related to the stress, (sigma), which causes that strain. In some circumstances this relationship is linear and takes the form (epsilon = frac{1}{E}sigma), or equivalently, (sigma = Eepsilon) where (E) is a constant (for the particular material) called the Young’s modulus.

Stress is a technical term related to the forces which are present in a material which is strained – compressed or stretched. (Technically, stress is defined to be the force per unit area.) It is often given the symbol (sigma). Stress is related to the strain, (epsilon). In some circumstances this relationship is linear and takes the form (sigma = Eepsilon) where (E) is a constant (for the particular material) called the Young’s modulus.

A subscript is a small character – number(s) or other symbol(s) – written to the bottom right of a variable in order to distinguish different instances of that variable. For instance, if the average temperature, (T), were recorded on each day of the week we might choose to label these temperatures

A superscript is a small character – number(s) or other symbol(s) – written slightly higher and to the right of a variable. Superscripts are used to distinguish different instances of that variable in the same way that subscripts are used. So, for example, we might refer to four temperatures as

Tension is a force, for example the force in a rope when it is used to pull an object. It is also the force in a spring which is caused by stretching the spring.

A mathematical quantity which is allowed to vary or change. This distinguishes the quantity from a constant which is fixed and does not change.

Velocity is the rate at which an object’s position changes. Specifying a velocity is equivalent to specifying the object’s speed and its direction of travel.

A straight line running from the bottom of the page to the top (often called the (y) axis).

The point or location where a line cross the vertical axis. In the equation (y = mx + c) the vertical intercept is given by the value of (c).

Voltage across a resistor

A quantity in electrical engineering which measures the electrical tension or pressure across a component called a resistor. It is often referred to as electric potential. Negatively charged particles are attracted towards higher voltages.

A straight line running from the left of the page to the right (often called the horizontal axis).

A straight line running from the bottom of the page to the top (often called the vertical axis).

Young’s modulus, (E), is a quantity which measures the stiffness of a material. It appears in the relationship between stress, (sigma), and strain, (epsilon), – often a linear relationship of the form (sigma = Eepsilon).

This content is taken from Loughborough University online course 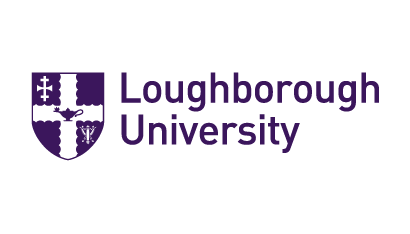