The quadratic dependence of kinetic energy on velocity has many implications. In this article, we talk about kinetic energy, bullets and collisions. 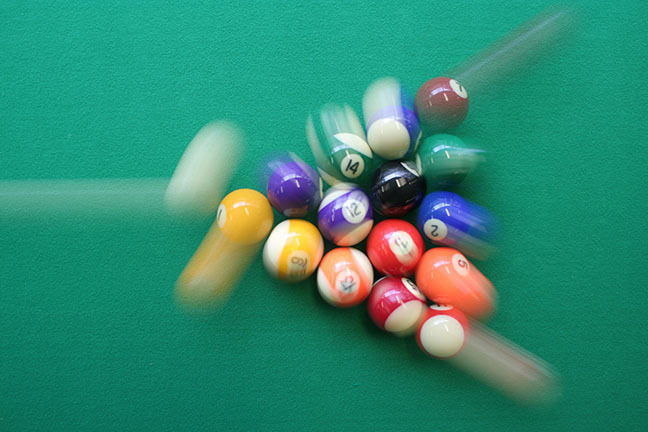 In this article, we will

Physicists regard kinetic energy as energy due to motion, and sometimes also refer to the amount of work that a moving particle can do. For a single particle of mass (normalsize{m}) moves with velocity (normalsize{v}), its kinetic energy is officially defined as

The Law of Conservation of Energy is a sister to the Law of Conservation of Momentum, which implies that in a collision between a number of different particles of varying speeds and masses, the total momentum is also conserved. However there are some big differences: prominently that Momentum doesn’t change into something else, but energy can assume quite a lot of different forms, and momentum has a directed aspect, unlike energy.
If you fire a gun, the law of Conservation of Momentum says that the momentum of the bullet is exactly equal to, but opposite in direction, to the recoil of the gun. However the energy of the bullet is much more than the energy of the gun: as far as energy is concerned the energy of the chemical explosion is changed into the combined energy of bullet and gun, along with heat and noise.

Fortunately for physicists, having both laws at hand to study collisions often is enough to predict quite a lot about what happens. This is especially so in elastic collisions, where no energy is assumed lost due to friction, heat or noise. Let’s illustrate this by making an (advanced) computation: feel free to skim this if you like, but do have a look at the animations.
A particle of mass (normalsize{m_1=3}) is traveling right (in the positive direction along a one-dimensional axis) with velocity (normalsize{v_1=5}) meters per second. It hits (elastically) a second particle of mass (normalsize{m_2=1}) which is stationary, so we write (normalsize{v_2=0}).
Suppose that after the collision the respective velocities are (normalsize{w_1}) and (normalsize{w_2}). Can we determine these two velocities? Can we predict what happens? This is a powerful example of how a bit of linear and quadratic mathematics solves an interesting real-world problem.
First, we gather our facts
By Conservation of Momentum and Energy: