We have a look at cubic polynomial functions. 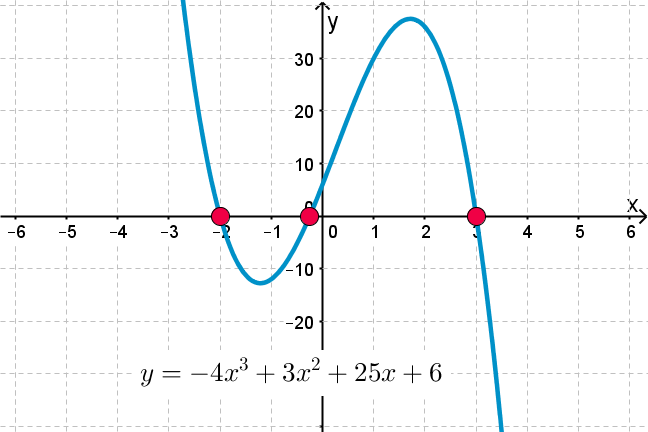 Just as for quadratic functions, knowing the zeroes of a cubic makes graphing it much simpler. Typically a cubic function will have three zeroes or one zero, at least approximately, depending on the position of the curve. Finding these zeroes, however, is much more of a challenge. In fact this challenge was a historical highlight of 16th century mathematics. In this step we will

One simple way of cooking up a cubic polynomial is just to take a product of linear factors, for example \[\Large{y=(x-4)(x-1)(x+2).}\]We hope that you can all expand the right-hand side to get

If you made progress with this factorisation, then you should find a factor of \(\normalsize (x^2+2x+14)\) appearing, and you will find it resists further attempts to factor it. Perhaps it doesn’t factor, but how would we know that the quadratic term does not factor further?
One way is to keep trying the various possible factors, but a better way is to use the quadratic formula. The discriminant of this quadratic is \(\normalsize{b^2-4ac=2^2-4(1)(14)=-39}\) which is not a square, so there is no rational factorisation. We say that \(\normalsize{x^2+2x+14}\) is irreducible (over the rational numbers) and leave it at that.

Suppose someone gave you the cubic function
\[\Large{y=(x-7)(x-53)(x+13)= x^3-47x^2-409x+4823}\]
and asked you to factor it. Not knowing the left hand side of the equation, it might take some work to find the factors. But what if the cubic does not factor nicely into factors? Just by changing the cubic a little to
\[\Large{y= x^3-47x^2-409x+4822}\]
makes things vastly more complicated! This is just the kind of challenge that 16th century mathematicians like G. Cardano (1501-1576) and N. Tartaglia (1500-1557) gave each other.
During one of these challenges, Tartaglia discovered a general formula for solving cubics which extends the much more familiar quadratic formula. His formula is quite remarkable in that it requires complex numbers in an essential way, and also both square roots and cube roots. However it is not for the faint-hearted, and it is fair to say that these days it is rarely used.

Girolamo Cardano, By Wellcome Library, London, CC BY 4.0, via Wikimedia Commons
The story of how Cardano (pictured) stole the credit for this formula from Tartaglia is one of the most juicy episodes in the history of mathematics. For this story and other historical information on cubics, check out Norman’s History of Mathematics lectures on his YouTube channel.
Tartaglia’s cubic formula is workable if your example has been chosen carefully to have linear factors in the first place. But a random cubic does not have such a property, and so most cubics can in fact only be approximately factored.

Hi there! We hope you're enjoying our article: Cubic polynomials and their roots
This article is part of our course: Maths for Humans: Linear, Quadratic & Inverse Relations