When studying systemic anatomy, the body can be divided into 11 systems. We will focus on two of them: the skeletal system and the muscular system.

When studying systemic anatomy, the body can be divided into 11 systems. We will focus on two of them: the skeletal system and the muscular system.

There are three types of muscles, cardiac (the heart), smooth (the digestive organ), skeletal (the biceps and others). In the following article, we will only focus on the skeletal muscles.

Skeletal muscles act upon the bones to create movement at the joints. The big red fleshy portion is called the muscle belly, while the white narrow ends are called tendons. These tendons are what attaches the muscle to the bone. Muscle bellies have fibres that contract when the muscle is fired (turned on). This causes the tendon to pull on the bone, resulting in movement. The figure below illustrates the process of muscle contraction (firing). This causes the muscle to pull on the bone, which then results in movement.

Muscles function by contracting: they pull together, never push. The end of the muscle attached to the fixed bone is called the origin, while the moveable end is called the muscle’s insertion.

Many muscles may be involved in an action. The main muscle is called the agonist and is the “prime mover”. Muscles that assist the agonist are called a synergist. These can also be fixators; that is, they stabilize the origin bone of the agonist. Finally, a muscle with the opposite action to the agonist is called an antagonist. 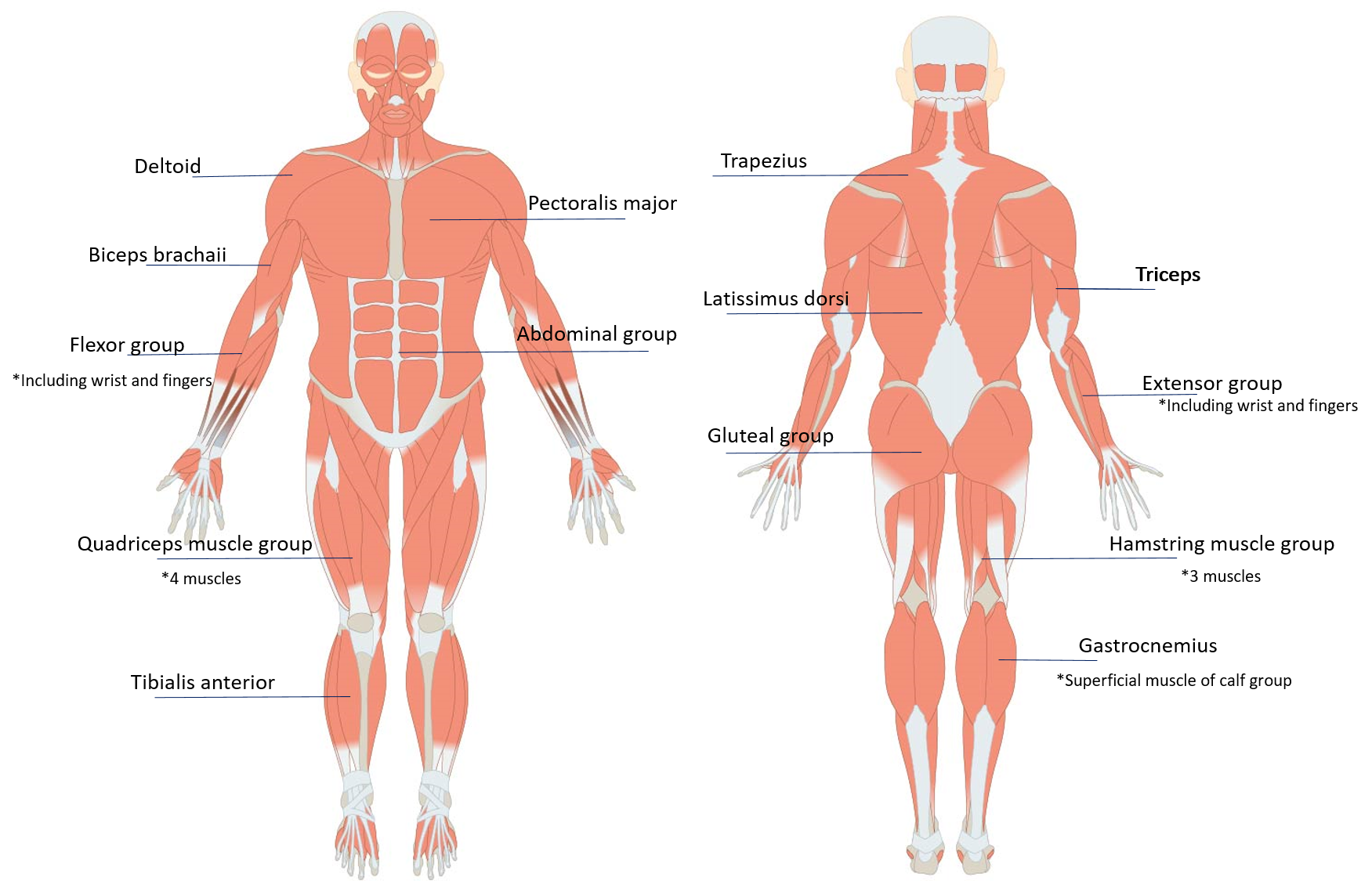 Humans have roughly 206 bones that provide the “scaffold” of the body. The image below identifies the major bones or groups of bones in a human skeleton. 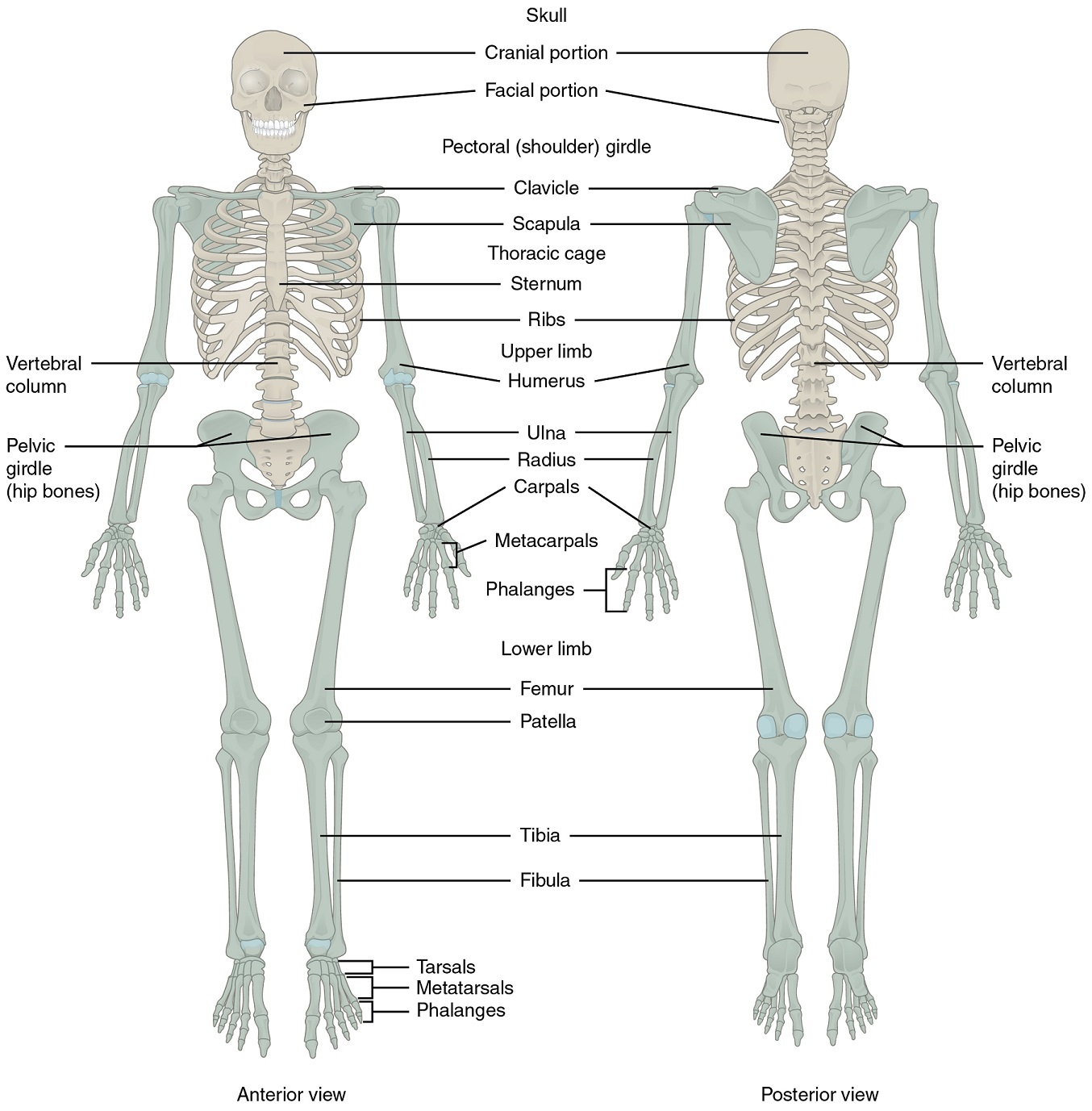 Bones facilitate movement by serving as attachment sites for the muscles. Think of bones as the “levers” of movement.

Bones have landmarks on them that serve as muscle attachment sites. Some of these markings we can palpate (feel). You can try to locate some of these on your own body:

When bones are connected, they form what is called a joint. Such joints can be classified both structurally and functionally. Structural classification considers how the bones are connected; with fibrous connective tissue, cartilage, or enclosed within a fluid-filled space called a joint cavity. A functional classification describes the motion possibilities, ranging from immobile, to slightly mobile, to freely moveable.

Joints have a variety of forms, which in turn dictate their motion. When analyzing human movement, it is important to determine the joint type and how it can move. The image below illustrates six of the major types of freely moveable joints and how they move. 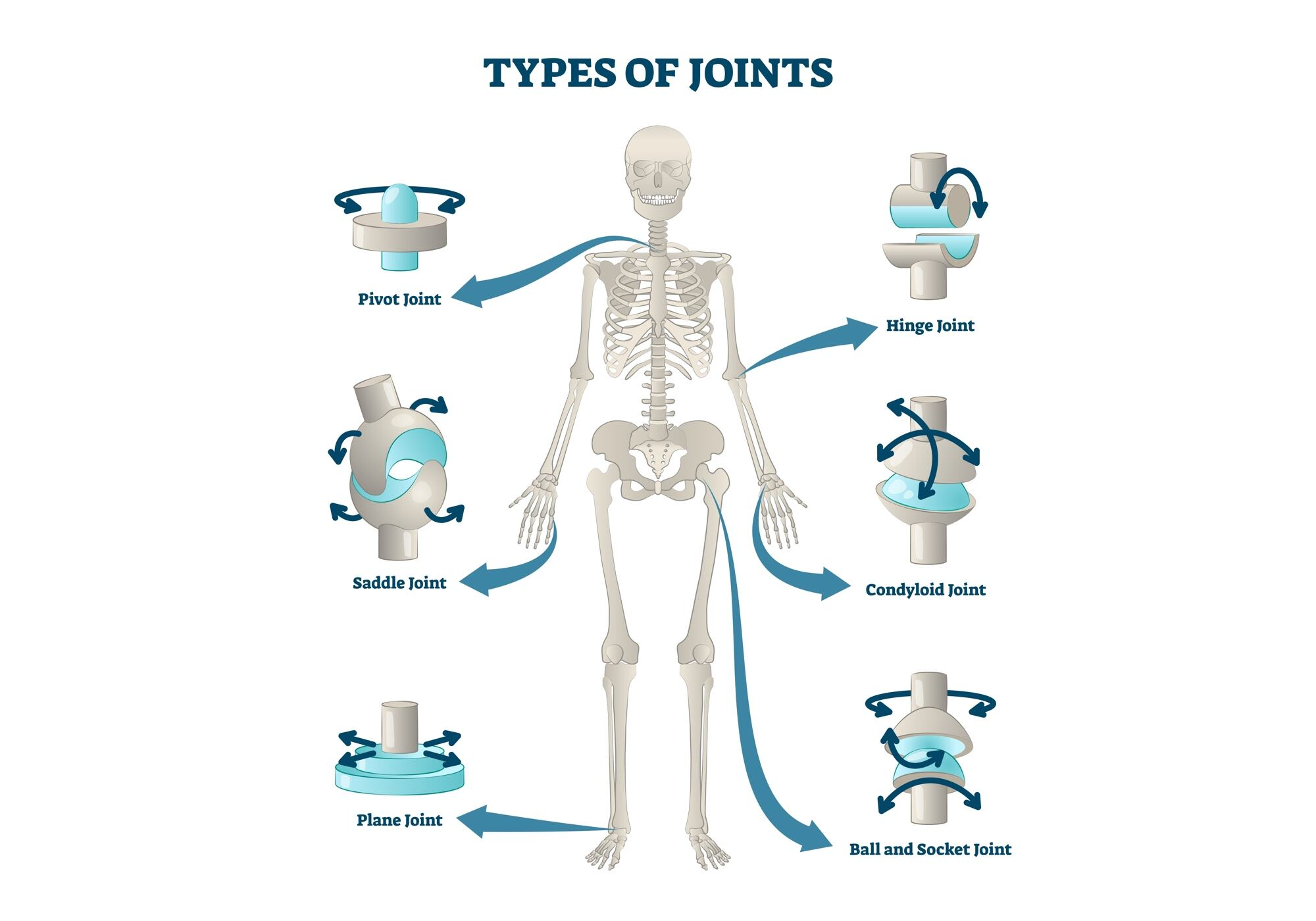 We can describe joint motion in pairs of movement types, similar to pairs of directional terms. Body movements are always described in relation to the anatomical position. The main types of planar movements are:

The major movement types are illustrated in the figure below.

Additional specialized movements occur in certain joints. Supination–Pronation is a specialized form of rotation mainly used when describing the motion of the forearm and the resultant position of the hand. Dorsiflexion–Plantar Flexion is the ankle joint’s specific movement in the sagittal plane, while Inversion–Eversion refers to the movement of the ankle along the long axis of the foot. Elevation–Depression is upwards and downwards movements, usually describing the shoulder and jaw.

Degrees of freedom and Range of motion

The degrees of freedom (DoF) describes a joint’s possible motion directions. In addition, the range of motion (RoM) describes how far the joint can move.

Let us look at the example of the elbow again. This is a hinge joint that allows for flexion and extension. Thus it has only one degree of freedom. Other joints, like the shoulder, have three degrees of freedom: extension–flexion, adduction–abduction, and internal and external rotation. As seen in the figure below, the elbow joint can move from 0 to 140 degrees, making its RoM 140 degrees. 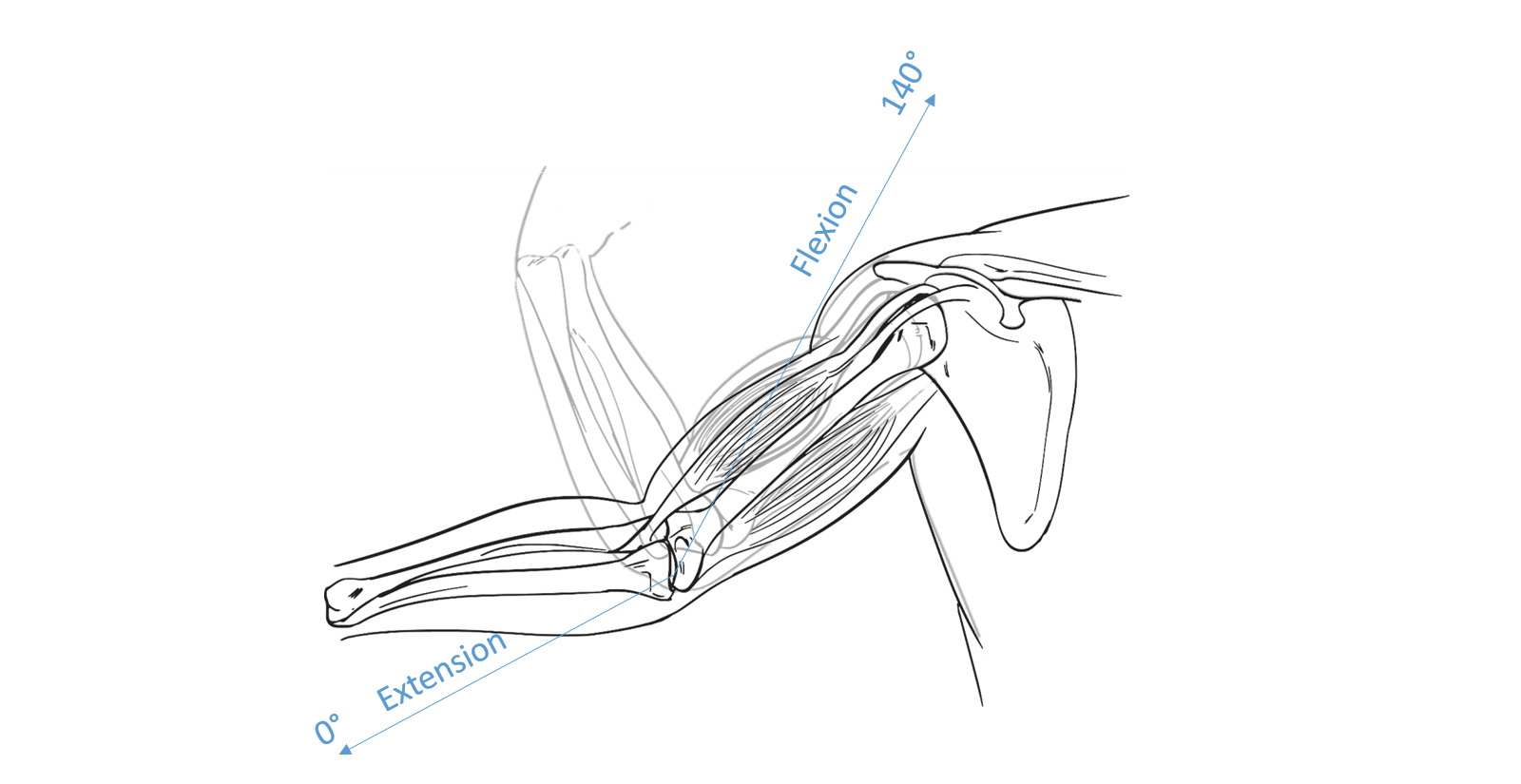 In summary, the musculoskeletal system combines bones, joints, muscles, and related connective tissue. Bones are the framework of the body creating the skeleton. Joints are where bones come together, and movement occurs. Muscles are the power for controlling movement.