The calibration routine is done to establish a 3D reference for the cameras in a motion capture system.

The calibration routine is done to establish a 3D reference for the cameras in a motion capture system. It effectively “links” them to the real world and each other.

All motion capture systems need to be calibrated to work properly. It is usually not necessary to calibrate for each capture you are doing, but a rule of thumb is always to start a session with a calibration routine.

To calibrate a motion capture system, we need a tool called a “wand” (see figure below). This is a metal rod that has markers set at a fixed distance from each other. The system is programmed to know the size of the wand and the distance between the markers. When the wand is moved through the capture volume, the system takes 2D images from each synchronised camera. 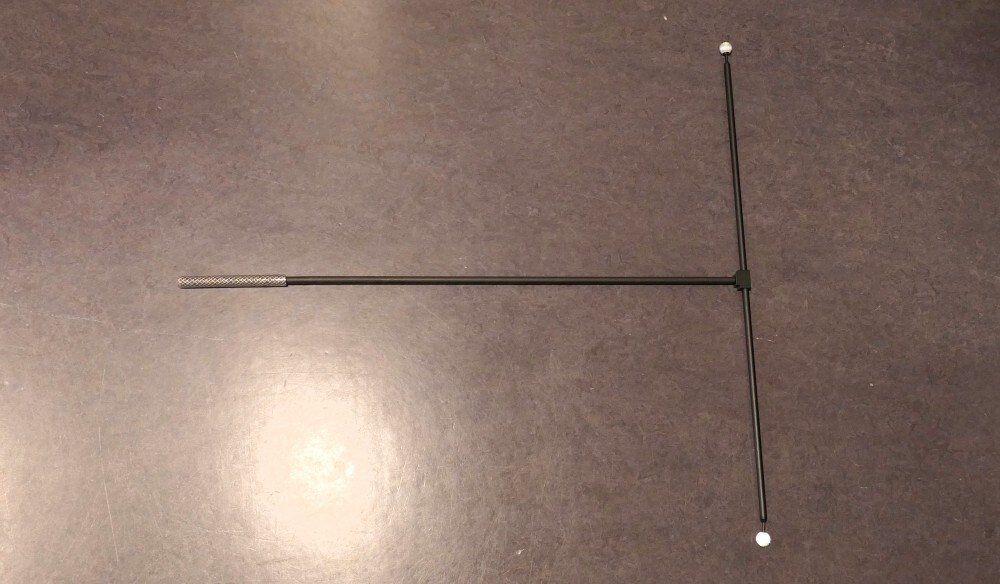 Calibration allows a motion capture system to determine the position and orientation of its cameras relative to each other. Still, some additional information is needed to determine their position in the world. This is done by defining the ground plane of the capture volume. Then we need to use an L-shaped structure with 3–4 fixed markers (see below). 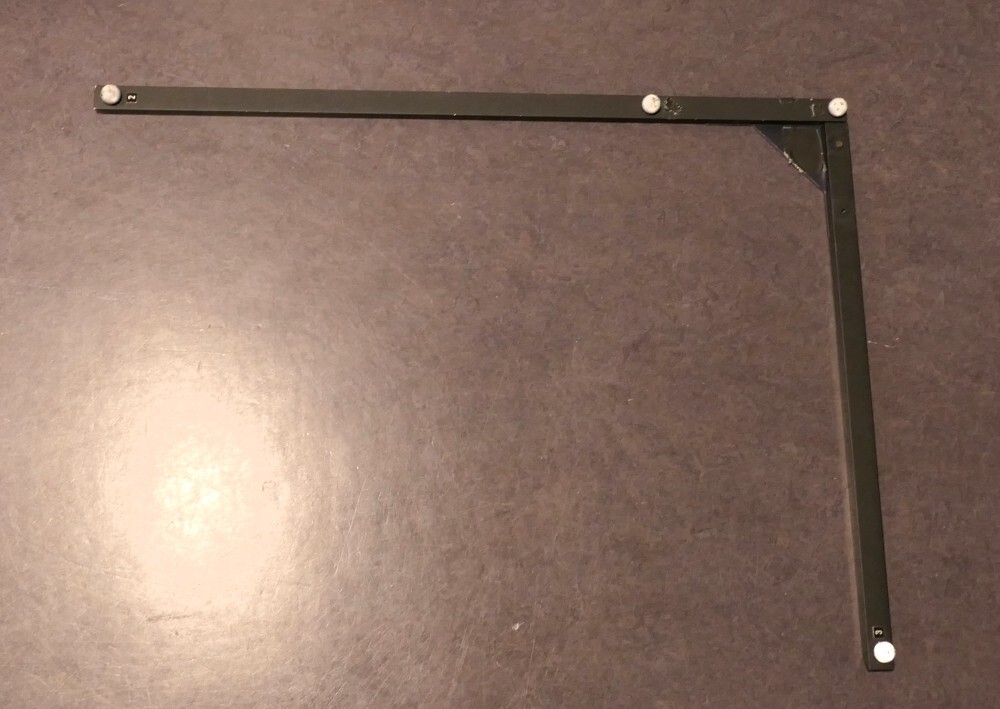 The L-shape is placed on the ground somewhere in the capture volume. Through the calibration routine, the system recognizes the L-shape and the markers’ distance. The computer uses this information to determine how the cameras are positioned and oriented relative to the ground.

The ground plane defines the origin of the capture volume (i.e., X = 0, Y = 0, Z = 0) and the direction of the X, Y, and Z axes. It can therefore be useful to give some consideration to the placement of the L-shape. For example, if you intend to capture the motion of an athlete who is exercising on a rowing machine, it will facilitate your analysis to align one of the horizontal axes with the expected direction of forwards/backwards movement.

The cameras should be in a fixed position before calibrating. If you move a camera or change camera settings after calibrating, you need to re-calibrate.

To start the calibration process, you should clear the capture volume of all people and markers. The cameras may detect some reflections even if no markers are present, such as a shiny floor or a chair or table leg. These can be “masked” in the motion capture software to not interfere with the calibration or recording. However, it would be best to take care not to mask reflections you intend to record and avoid masking too large areas. After all, you will not be able to capture markers within a masked area.

Once the capture volume is clear of reflections, you can begin “wanding.” Move the wand through the air (“paint the air”) within the capture volume. It is best to move at a moderate speed, as going too fast may lead to calibration problems.

Try to cover as much of the capture volume as possible. Some systems have a visual display that allows you to monitor where samples have been collected. It is a good idea to cover different parts of the capture field for each camera. If you plan to record activity in a specific part of the volume (e.g., recording a musician sitting with their instrument), getting more samples in that area is useful.

As a general rule, you should aim for about 5000 samples per camera during a calibration routine. With too few samples, the system will not have enough information to make a good calibration. On the other hand, too many samples may increase the measurement error. In most cases, the software will let you know the quality of your calibration.

Once wanding is complete, the system will calculate the calibration results and present you with some information about how successful the calibration was. The main result is a mean error, which may be given in millimetres and/or pixels—the lower the number, the better the calibration is.

The image below shows a motion capture software display after calibration. The positions of the cameras are shown in green, and a grid represents the floor. Some markers are visible in the centre of the space. 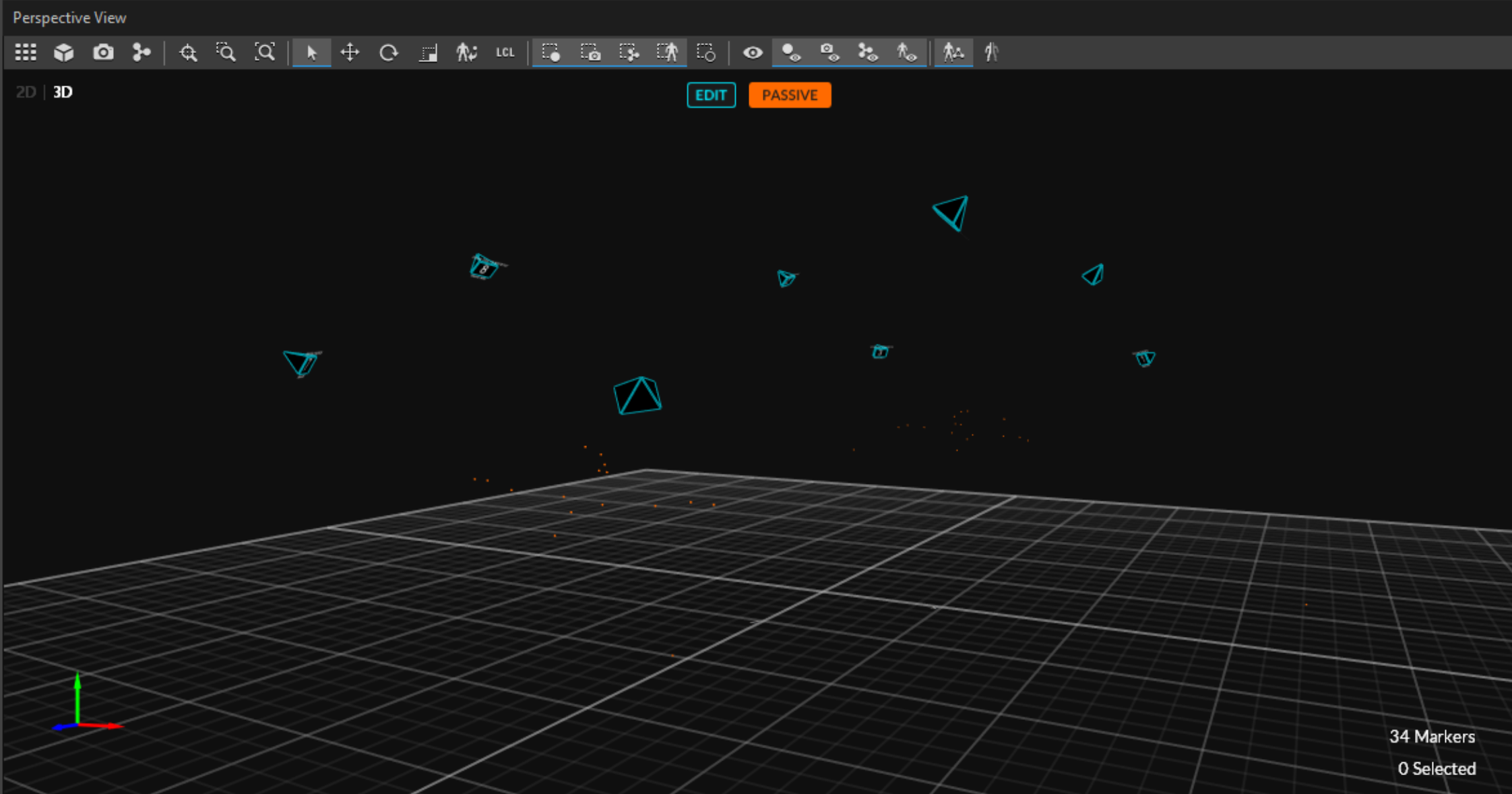 Some motion capture software can also display the calibrated capture volume (see below). Here the green cubes indicate the capture volume. Notice that the volume extends far from the cameras—even (theoretically) below the floor level. Also, notice how uneven the volume is. This is because the calibration was focused on the two ends of the space, and the middle was left largely uncalibrated. 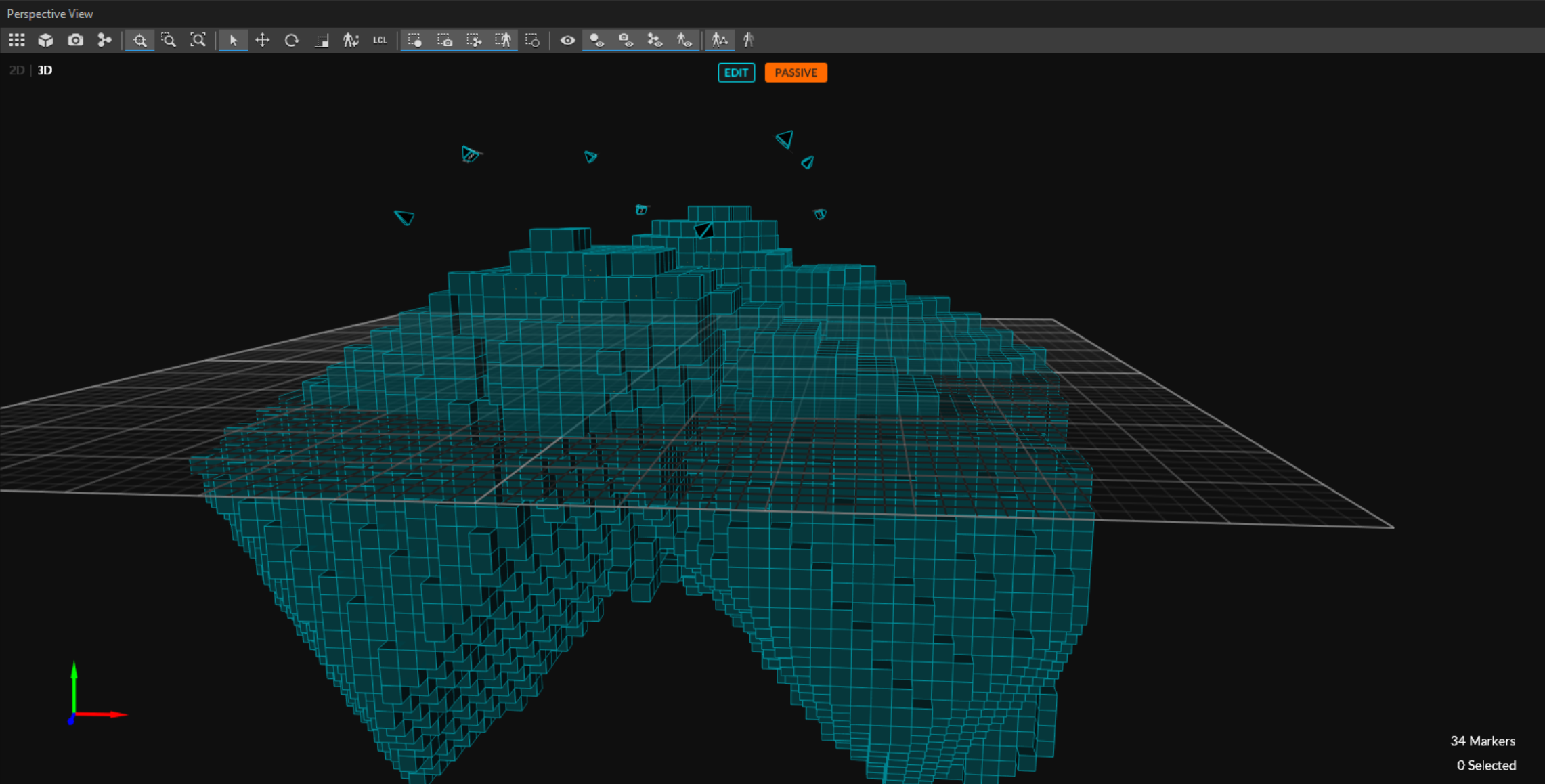 The “noise level” of a motion capture system

Over the years, we have systematically measured the “noise levels” in various motion capture systems. By “noise,” we here think about irregularities in the data caused by the system itself. For many purposes, the noise level does not matter. But in our research on, for example, micromotion, the noise level is crucial.

The noise level can be measured by capturing a static marker in the capture volume. This can be a marker placed on the floor, on a chair, or a stand. Since such a marker does not move, any captured “motion” is caused by the system’s noise. This noise is caused by the technical limitations of the cameras but also the quality of the calibration. In general, all our infrared motion capture systems perform very well: the average quantity of motion for a minute-long recording is often less than 4 mm/s for mid-range systems and 1.5 mm/s for a higher-end system. An example plot of a static marker is shown below.

We have also compared the noise levels and tracking precision in recordings of static and moving markers by two motion capture systems running in parallel. One interesting finding was that static markers placed close to the edge of the calibrated volume recorded with relatively high noise levels. Also interesting was that while there was no substantial drift within individual recordings, the noise levels increased across the course of the experiment (recordings were 2.5—5 minutes long and taken across the course of a ~3 hour period). The figure below shows the noise captured for a static marker in this experiment. The blue and red curves show data that were captured simultaneously by the two motion capture systems.

The calibration routine is crucial to making high-quality motion capture recordings. It does not help to have the best motion capture system if you record with a poor calibration. Furthermore, our experiments have shown how important it is to thoroughly calibrate the part of the capture volume you intend to use. It would help if you also positioned your markers (and/or participants) well inside the calibrated volume. To avoid reducing recording precision over time, it is recommended to calibrate periodically when you record long sessions. Finally, it may be useful to include one or more static markers in your recording so that you can also report on the noise level(s) you recorded with.