Mari’s research on musicians and dancers

his article will present a rhythm study of a specific style of traditional Norwegian dance music called telespringar. 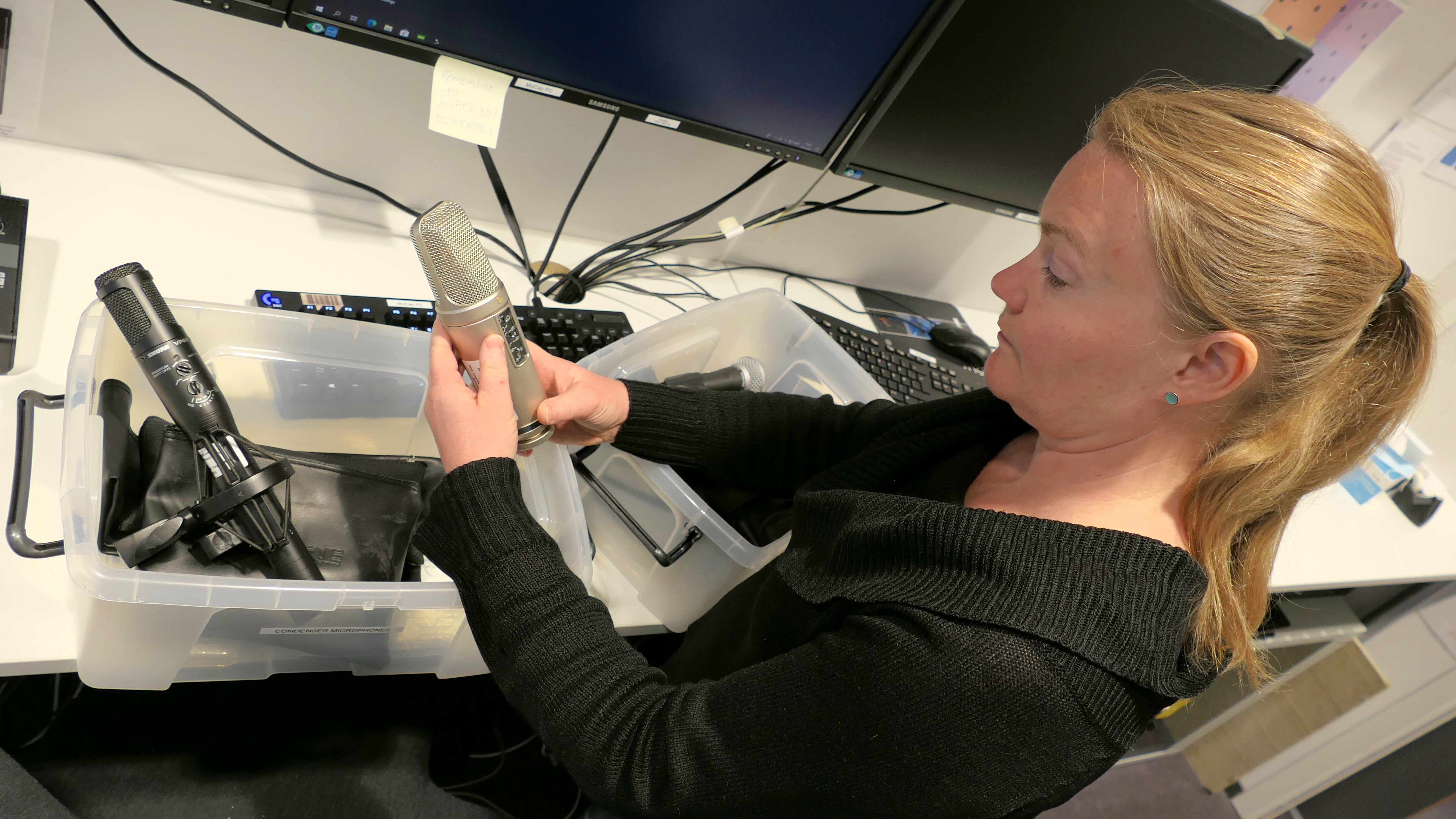 In my studies, I record musicians and dancers simultaneously. This article will present a rhythm study of a specific style of traditional Norwegian dance music called telespringar. It is based on a motion capture recording of three telespringar performers: one fiddler and two dancers.

The experience of musical rhythm often involves an interaction between sounding rhythms and endogenous reference structures, such as pulse and meter. This is typically the level of the musical rhythm that you will tap your foot or nod your head to. Whereas the pulse refers to successive beats, the meter could be described as a grouping of those beats. For example, in “Happy Birthday to You,” the pulse beats are grouped into three. In musical notation, the meter is indicated by the time signature, such as 4/4 or 3/4, at the beginning of the piece of music.

The recordings were carried out in the fourMs Lab using a nine-camera motion capture system from Qualisys. The system tracked the motion of reflective markers at a frame rate of 200 Hz. I recorded video files together with the motion capture data for reference. To ensure high-quality audio, I also recorded audio separately in Logic Pro X.

To be able to synchronize the motion and sound recordings, I used a clipboard with markers attached. Such a “movie-style” clipboard functioned well. It was easy to detect the simultaneous spikes in the audio recording and the acceleration plots of the motion capture data. Subsequently, these spikes were used as a common reference point when aligning the data streams.

The markers were primarily attached to the participants’ joints. When I record several participants simultaneously, I find it useful to introduce some supplementary control markers. These markers are not intended for analysis but for distinguishing the participants. In folk dancing, for example, the dancers twirl around and hold one another’s arms in different ways. Without control markers attached to the dancers’ torsos (front and back) and upper and lower arms, it can be tough to tell them apart. The control markers can also be connected with the proximate joint markers by “bones, “ facilitating the identification process.

In this particular study, I recorded one fiddler and two dancers. In addition to markers placed on the participants’ bodies, I decided to attach four markers to the fiddle and two to the bow. Below is a figure showing the placement of the markers attached to the dancers, fiddler, fiddle, and bow. The markers have been identified and connected by “bones.” 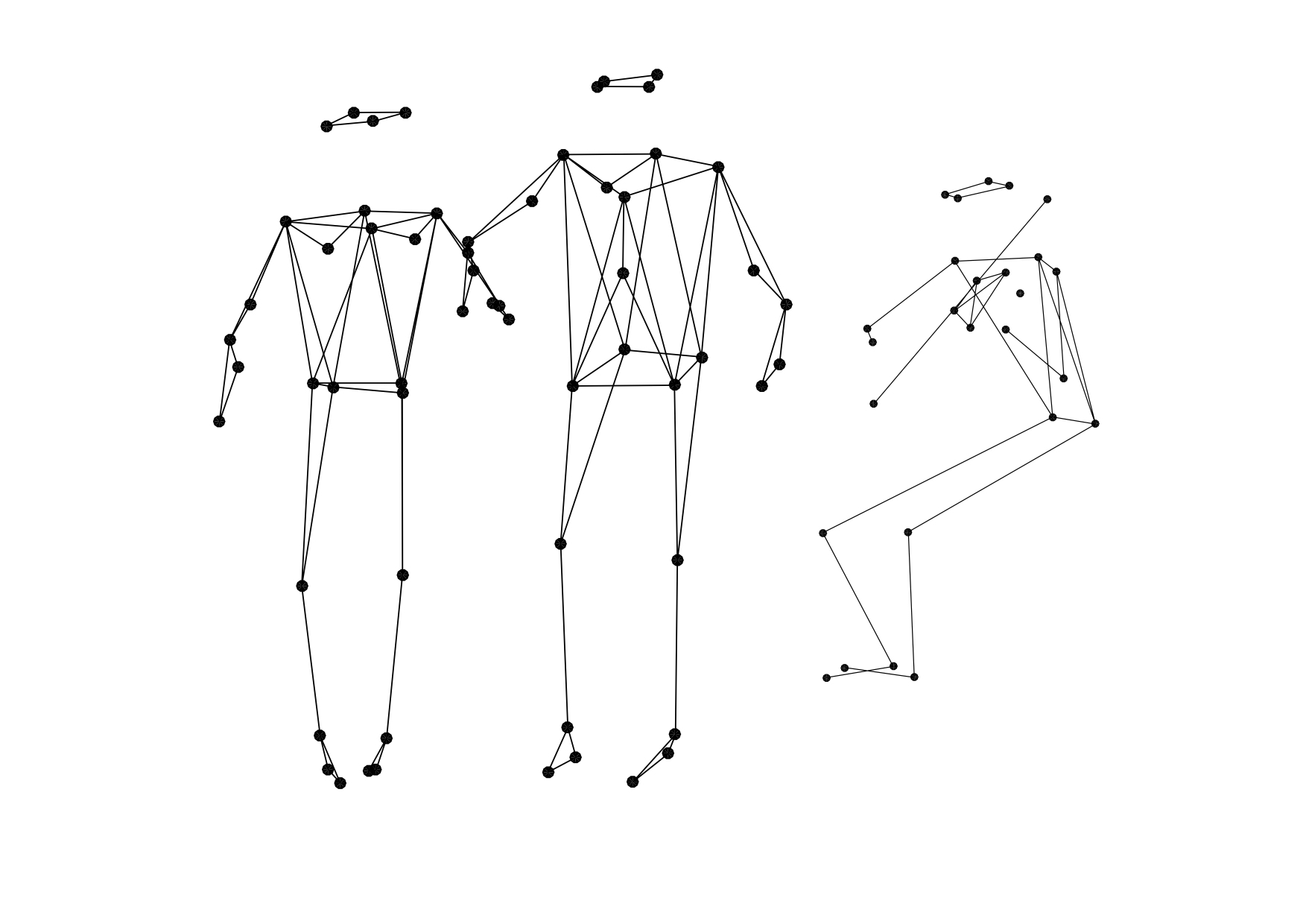 You can watch a short excerpt of the motion capture recording in this video:

A motion capture lab is not a typical environment for folk music and dancing. The attachment of reflective markers to one’s body can exacerbate the feeling of being in an artificial environment even more. I am interested in the participants performing as they would normally do. Hence, the performers must be comfortable. Because of this, I chose to use only the motion capture jacket and the motion capture hat. For the legs and feet, I used straps and tape to attach the markers. I also dimmed the light slightly. 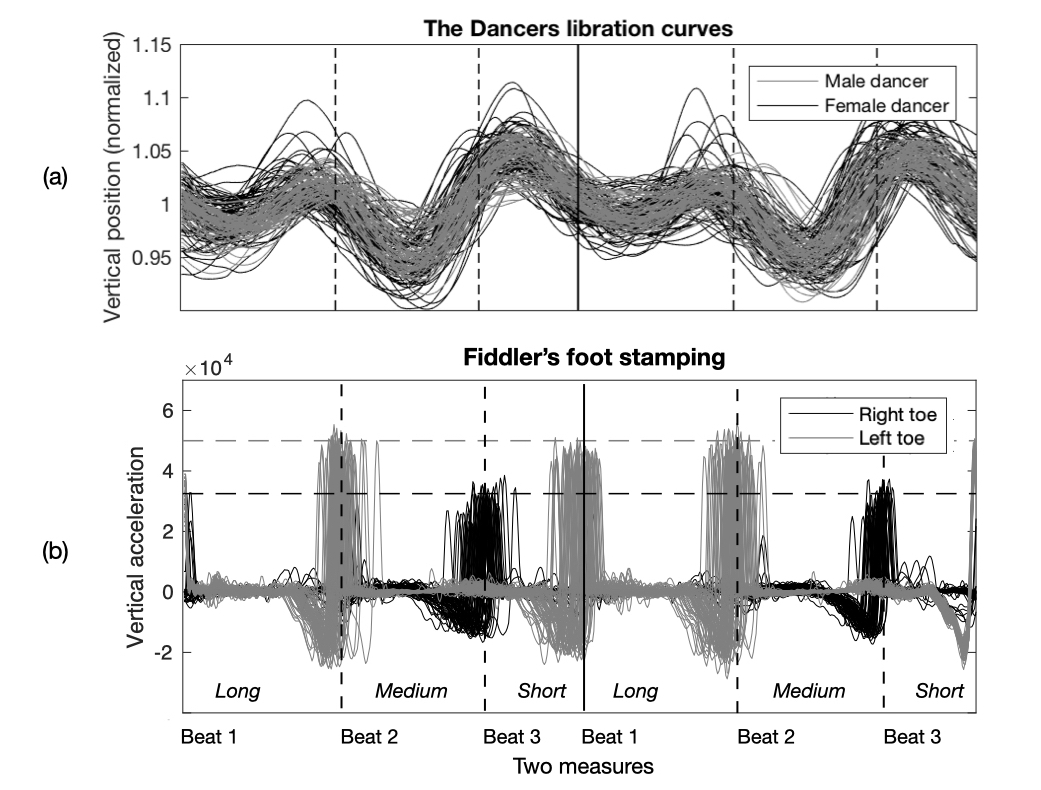