Find out more
Home / Creative Arts & Media / Psychology / Music and Intelligence: Can Music Make You Smarter? / Binet-Simon and measuring the intelligence of children

Binet-Simon and measuring the intelligence of children

The origin of intelligence tests: from Alfred Binet to today’s tests 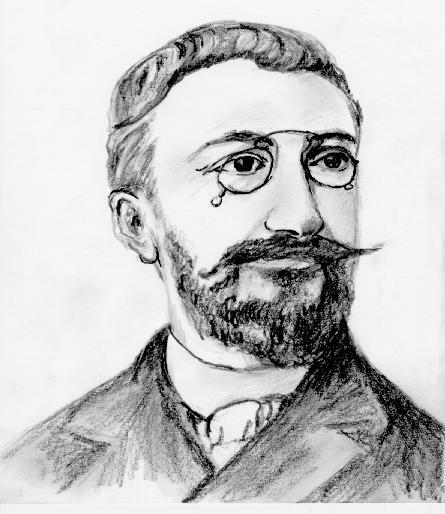 After the first pioneering attempts by Sir Francis Galton, the first real attempt to measure intelligence was the work of the French scientist Alfred Binet.

In this attempt, we see one of the characteristics that often underlies studies on intelligence: the urge for an immediate application of the concepts into real life problems. In the case of Binet, the application was in the educational context.

How it all began

France introduced mass education in 1882. Education, however, needed to adapt to the individual intellectual abilities of the children. In particular, there was the need to identify those children that were lagging behind the average intellectual level so that specific educational interventions could be made.

In 1904, the Minister of Education asked Alfred Binet to create a tool that could be used to identify these children and Binet, with the help of Théodore Simon, created the first intelligence test. 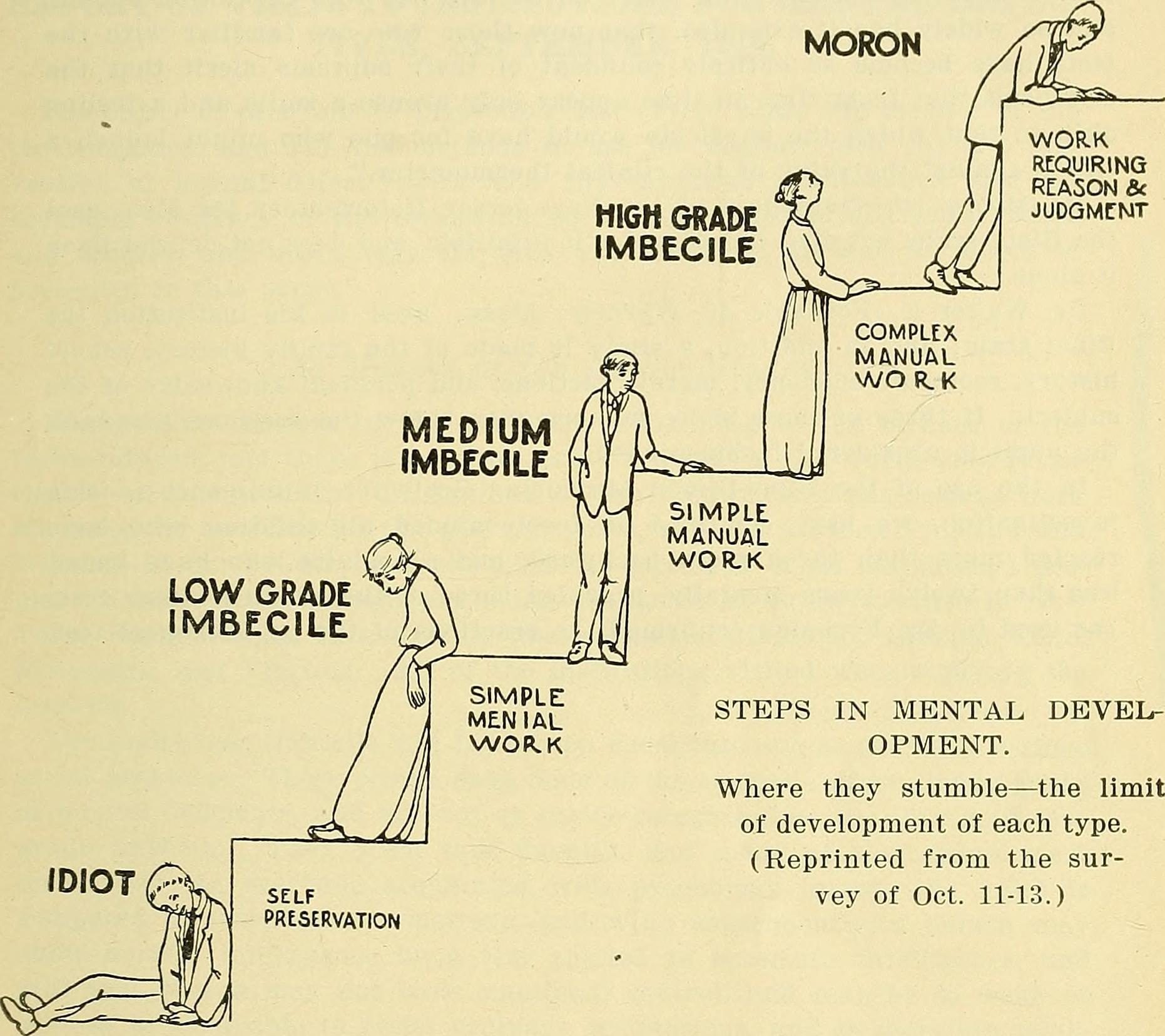 Although this illustration was from a special report in Virginia, it was based on the Binet-Simon classification; from Internet Archive Book Images, No restrictions, via Wikimedia Commons
The test enabled them to identify various levels of intellectual impairment: at the lowest level of intellectual abilities were the “idiots” followed by the “imbeciles” and the “morons”. Note that these terms were a common way to address children’s impairments at that time. 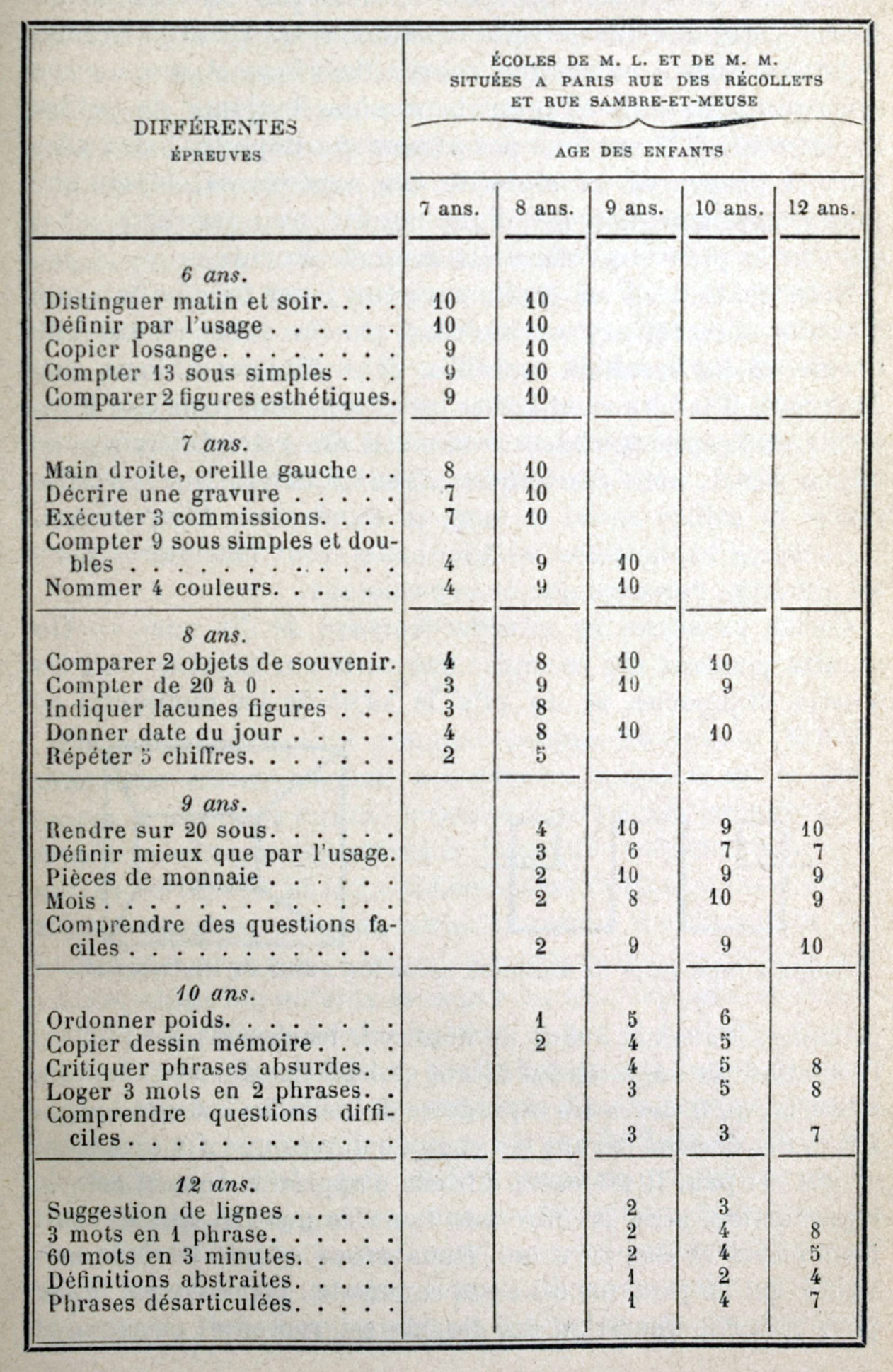 The Binet-Simon intelligence test in 1911; from Alfred Binet, Public domain, via Wikimedia Commons
The expected results are represented in a sort of standardized way, assuming that ten children are answering the questions. For example, a question that Binet hypothesised to be appropriate for seven year old children is to name four different colors. This question (the most difficult one of the seven-year-old block) should be answered correctly by four children (out of ten) of seven years of age, eight children (out of ten) of eight years of age and by nine children out of ten if the children are nine years old.

The IQ was the ratio between two numbers: the child’s mental age and the child’s chronological age.

If the child had a chronological age of 10 but could respond to questions that were hypothesized for eleven years old, the IQ resulted in 1.1 (i.e., 11/10). In contrast, if the child was responding at best to the responses that were hypothesized for nine years old, the IQ was 0.9 (i.e., 9/10). A ten-year-old child that responded correctly to questions hypothesised for ten years old had an IQ of 1. In this way, it was easy for the scientists to spot children whose intellectual abilities were ahead of their age (IQ greater than 1), children that were in line with their age (IQ equal to 1) and children that were lagging behind.
This formula was later improved by Lewis Terman, who multiplied the intelligence quotient by 100 to obtain a whole number, the metric of IQ that is still in use today. The idea of the intelligence quotient had limits.

For example, it could help the examiner to understand whether one child was better or worse than his/her chronological age but the measure had no much meaning at an older age.

When we become adults, intelligence does not increase more with age, so the ratio between mental age and chronological age loses its meaning.

The Stanford-Binet test… and more

The test by Alfred Binet was further developed by the American psychologist Lewis Terman. Terman extended the original test and created the Stanford-Binet test, with the first version published in 1916. 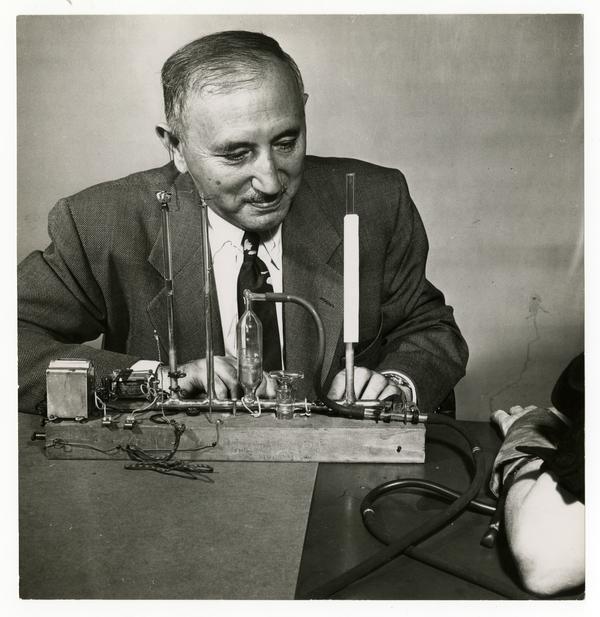 An example of a Raven-style progressive matrix; from Flantinori, CC0, via Wikimedia Commons
Nowadays, intelligence tests can be found in many forms: there are tests for children, tests for adults, and tests that are calibrated for the specific age (or age range) of the person taking the test. In many cases, the score of the test is still the IQ, but the meaning is no longer that suggested by Stern.

Nowadays, the IQ score is a number that represents the intelligence of the individual in comparison to the population.