In this article we look a little more at the concept of coarticulation, meaning the fusion of small-scale actions and sounds into larger units.
© Alexander Refsum Jensenius, University of Oslo

In this article we look a little more at the concept of coarticulation, meaning the fusion of small-scale actions and sounds into larger units.

The term coarticulation was first coined in linguistics to explain how syllables “merge” into words, which again “merge” into sentences. Professor Rolf Inge Godøy and colleagues at the University of Oslo have used the term in a similar way to explain how musical phrases can be seen as the fusion of small-scale sound units into sounds and phrases (melodies).

Our short-term memory is important for how we perceive the world, and also music. Although it is difficult to give an absolute duration, it is common to say that the short-term memory covers a range of about 0.5 to 5 seconds, perhaps longer if there are few events.

Based on the studies of music cognition at the University of Oslo, we believe that action and sound is broken down into a series of chunks in our minds when we perceive or imagine music. These chunks are typically based on the duration of our short-term memory, that is, 0.5 to 5 seconds. Not coincidentally, this is typically also the duration of many human actions, anything from opening a door, to meaningful snippets of speech and to many musical phrases.

From a cognitive perspective, it is commonly accepted that when we listen to music we often perceive such chunks (phrases, measures, or motives) rather than shorter or larger units.

Taking these thoughts into an embodied cognitive paradigm, we see that the formation of perceptual chunks can be multimodal in nature, and that chunking can be found also in the sound-producing actions of performers. We will not get into details here, but rather just give one example from a research study we did of piano performance.

The figure below shows the score and spectrogram of the first 8 measures of the opening of the last movement of L. v. Beethoven’s Piano Sonata nr. 17 Op. 31 no. 2 in d-minor, The Tempest (Example video, not the one used in the experiment). This piece was motion captured, and the figure below also shows plots of the horizontal positions (along keyboard) and absolute velocities of the left and right wrists, elbows, and shoulders of the pianist. 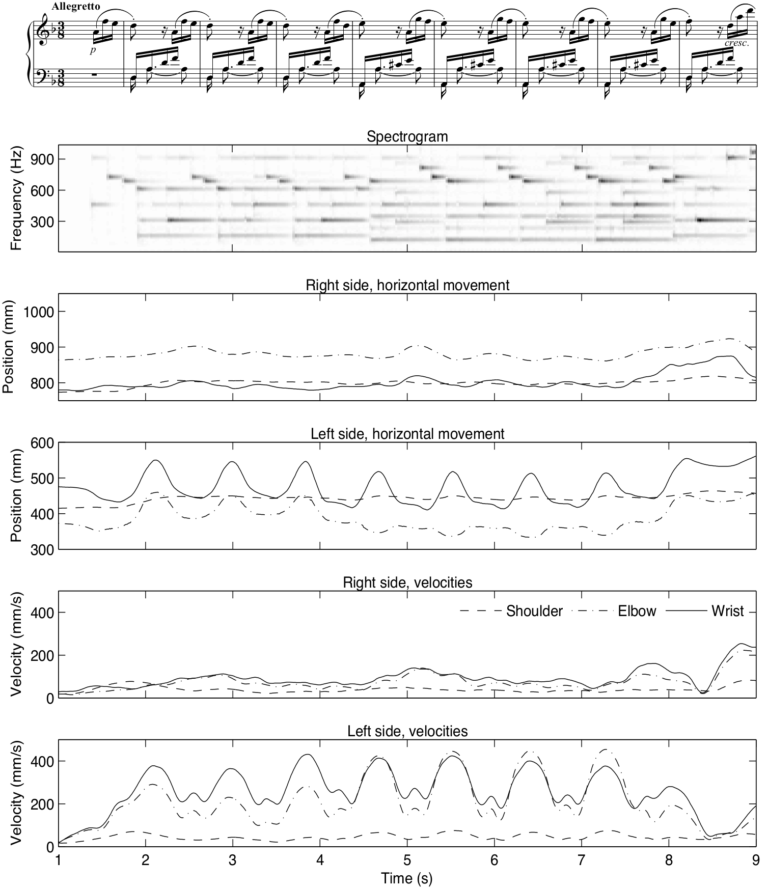 The interesting point here from a chunking and coarticulation perspective, is how the individual notes are merged into larger action chunks. This is particularly visible in the left hand, and can also be refound in the elbows and shoulders. This type of coarticulation is very common in music performance and is, to a large part, based on biomechanical constraints. You necessarily have to move your hand in a circular path to be able to play a passage like this.