The lithium abundance we measure, even in the same order, is still approximately 3 times smaller than what we predicted from the BBN and WMAP. This problem has not been solved yet and is called “the lithium problem”. Is there any systematic error in our observation? Is the theory wrong or is there some new physics we don’t understand? We will introduce three possible solutions in this step: 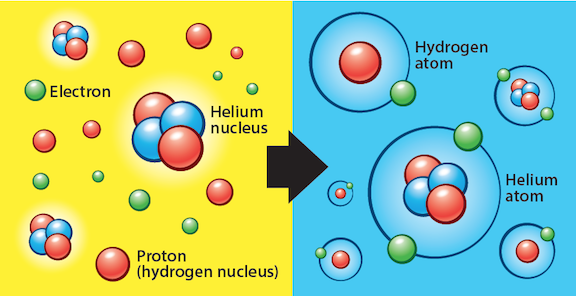 The Big Bang Nucleosynthesis (BBN) is a phase a few minutes after the Big Bang, which created the light elements (namely deuterium, helium and lithium). Combining the BBN theory and the observational data from the Wilkinson Microwave Anisotropy Probe (WMAP), the abundance of light elements such as hydrogen, deuterium and helium can be predicted. The measurement of hydrogen, deuterium and helium are consistent with expectations. However, there is an element, Lithium (especially Li-7) which has a discrepancy between the measurement and expectation beyond 4σ to 5σ.

The lithium abundance we measure, even in the same order, is still approximately 3 times smaller than what we predicted from the BBN and WMAP. This problem has not been solved yet and is called “the lithium problem”. Is there any systematic error in our observation? Is the theory wrong or is there some new physics we don’t understand? We will introduce three possible solutions in this step:

The Astrophysical solution states that if the BBN prediction and the CMB data are correct, the problem must be in the measurement process. The method the scientists calculate the abundance of lithium is using the absorption lines from the Pop II stars (i.e., low metallicity). The method (i.e., Spite plateau) indicated that the lithium abundance we measure from the metal-poor stars in the galactic halo is independent of the Galactic nucleosynthesis. If there is any misstep, the lithium problem would be alleviated.

The second possible solution: the Nuclear physics solution states that the measurement of lithium abundance is accurate enough and the error is in the BBN theory. The weak and strong interactions in the BBN process are complicated. Any wrong reaction (e.g., the rates are incorrect) or missing reaction in the BBN will lead to the lithium problem. The first probability is that the quoted uncertainties of cross-sections of some of the reactions are set too low. However, the absolute cross-sections are hard to measure. Another solution is that some of the reactions may escape from the experiment in the laboratory due to the resonance, which would be underestimated.

Solutions Beyond the Standard Model

What if both the BBN theory and the prediction from the calculation are correct? The last probability is that there is new physics beyond our current understanding. Note that when we predict the abundance, we actually input the observational data from WMAP. The input data is the baryon to photon ratio. There is another probability that this ratio may be different in different regions, which indicates a non-standard cosmology case. Moreover, if the atomic transitions occurring in the high-redshift Universe are different from the current Universe. This kind of change the fundamentals might solve the lithium problem. In addition, dark matter decay would replace the lithium after the BBN.

The debates on the lithium problem continue to this day and are set to see many possible solutions tested in the near future.