In this article, we cover an introduction to The Treaty of Waitangi, the New Zealand Wars, and the Kingitanga Movement. 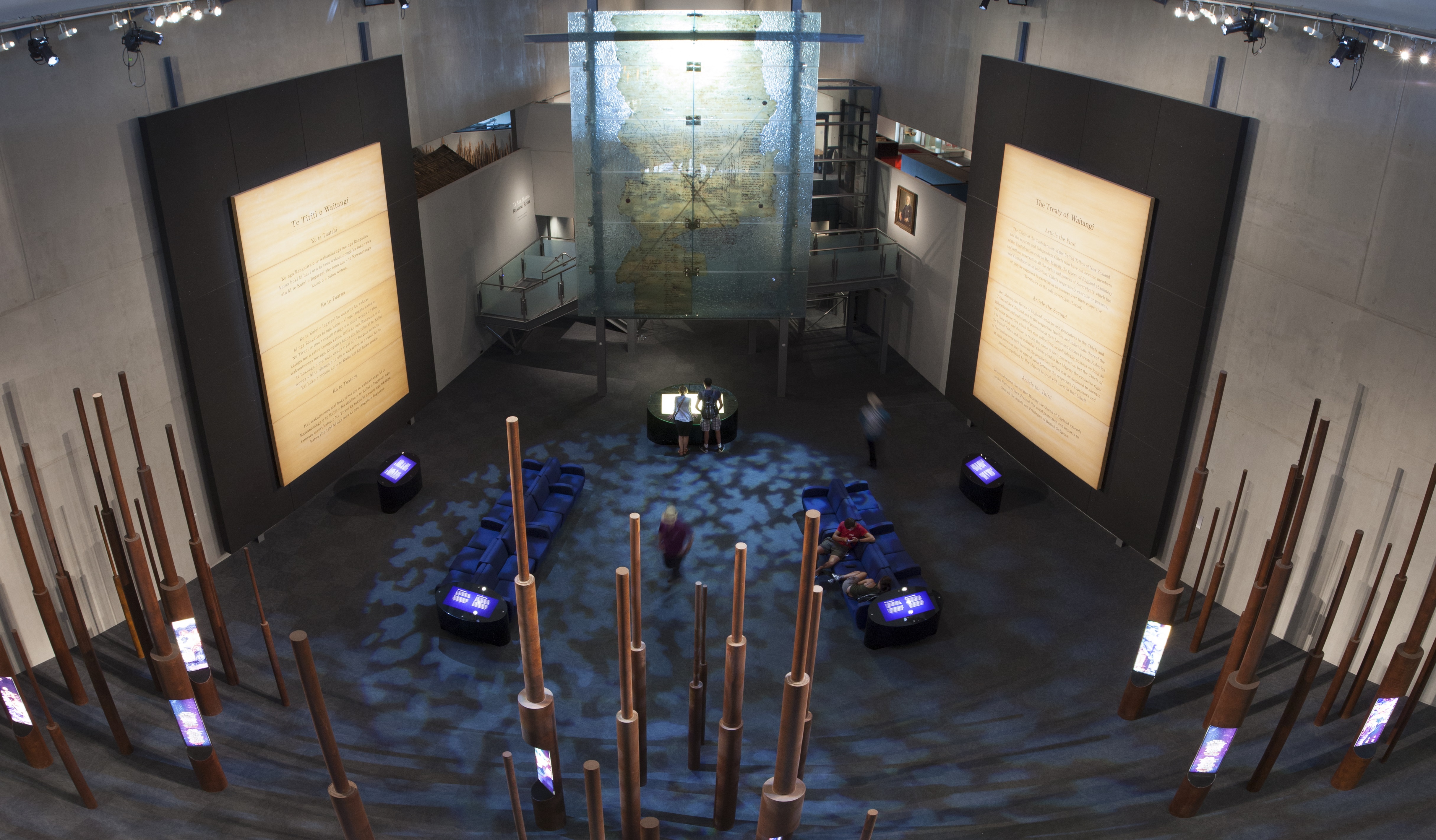 To prevent control of New Zealand by the French or other interested parties (such as the New Zealand Company), British Naval Officer William Hobson was tasked with obtaining sovereignty of New Zealand from its native people.

The influence of groups such as the Aborigines Protection Society in England placed conditions on such a treaty – primarily that the native parties must be negotiating and signing with informed consent. That is, it was imperative that they understand exactly what they were agreeing to. For Māori, one hope was that a treaty would address instances of bad faith dealings with settlers, frequently to do with the unjust seizure of Māori land and resources.

The treaty itself was drafted by Hobson, James Busby, and British missionaries over just a few days and was then translated into te reo Māori (the Māori language), by British missionary Henry Williams and his son Edward in a single night.

500 Māori were in attendance at Waitangi on the 6th of February 1840 to hear the first te reo Māori reading of the treaty. Several rangatira Māori (Māori chiefs) spoke in support after hearing it, others against. One such protest was from a man named Rewa who said, “Do not sign the paper. If you do you will be reduced to the condition of slaves, and be obliged to break stones on the roads. Your land will be taken from you and your dignity as chief will be destroyed.”

Nonetheless, more than 40 rangatira signed that day. 500 more came later, as copies of the document were distributed around the motu (country). Not all iwi (tribes) signed the document, and in fact several were not even invited to. Of those that did, all but 39 signed the Māori language version. 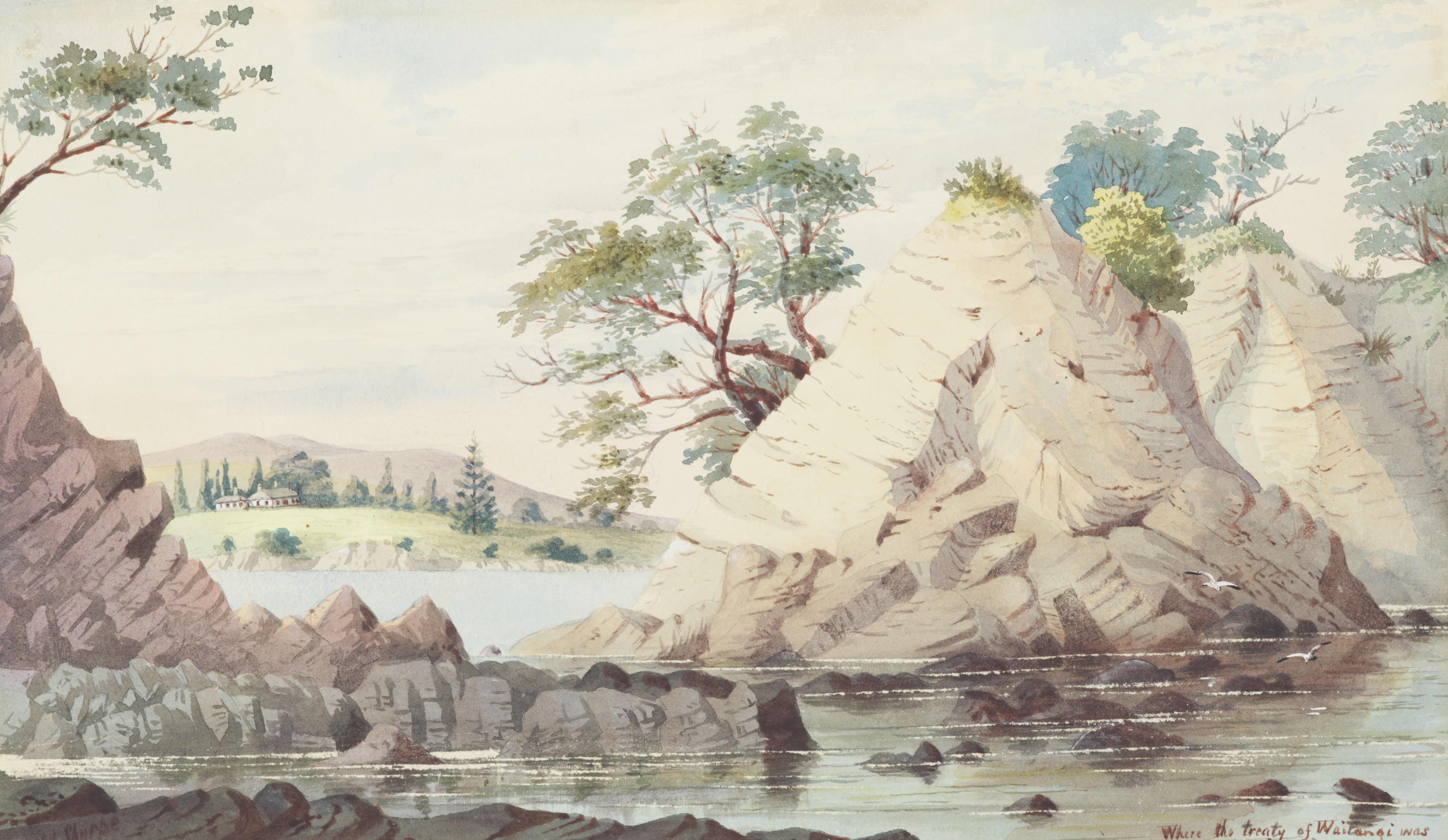 Where the Treaty of Waitangi was signed, 1882, New Zealand, by Alfred Sharpe. Te Papa

Here we come to the fatal flaw. The two versions, Māori and English, did not say the same thing. The most egregious difference is in article 1, arguably the key point. In the English version, the treaty states that Māori would cede complete sovereignty, the power to make and enforce laws, to the Crown. In the Māori version, sovereignty was translated to kawanatanga, a word created to reflect the English concept of ‘governorship’.

In the Māori version, rangatira would share power with the Crown. The authority of British Governors would apply only to the Pākehā (non-Māori) settlers and property, while Māori were promised the authority to self-govern their own people and lands – tino rangatiratanga (chiefly authority), under the protection of the Crown. What the English version of the treaty granted to the Crown however, was full authority over all of Aotearoa and its inhabitants. 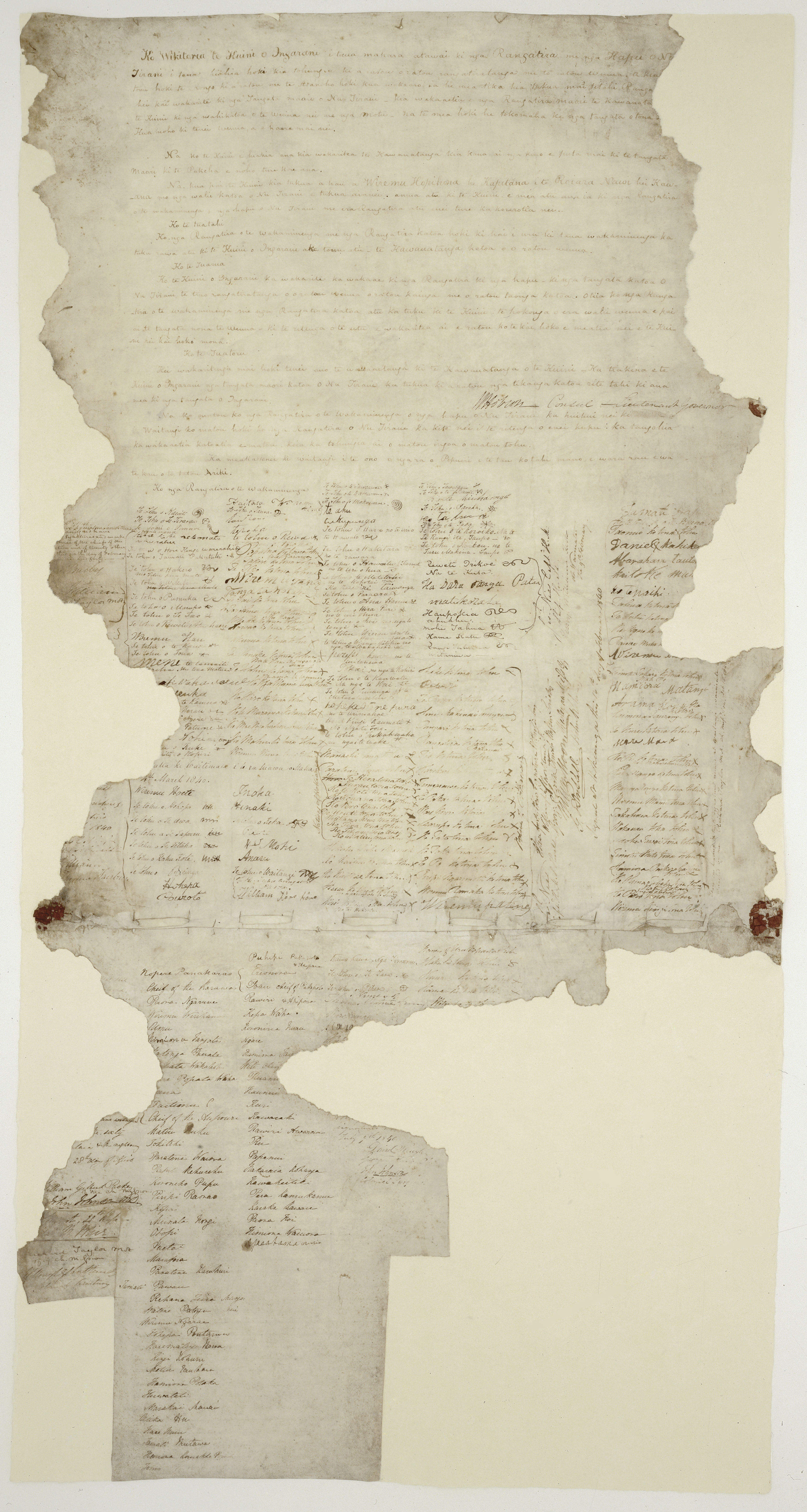 The Waitangi Sheet of the Treaty of Waitangi, signed between the British Crown and various Māori chiefs in 1840. It was later damaged by water and rats. Public Domain

Today, in areas where the two versions conflict, the te reo Māori version would be considered the authoritative version in applying the contra proferentem rule of international contract law, but this was not the case during the time the Treaty was signed. It soon became clear that the Treaty wasn’t being applied in the way the Māori version laid out; the new government enacted taxes and regulations that were applied to both Māori and Pākehā, despite the principle of Māori self-governance. Disputes over the differing translations of the Treaty, the new colonial government’s demands, and settlers’ desire to acquire land from Māori led to the New Zealand Wars from 1843.

More European settlers arrived and they demanded land. The treaty included a clause of Crown preemption of land sales, which meant that only the government could purchase land from Māori, and only if they were willing to sell. The Governor was under pressure to convince Māori to sell, but they became increasingly reluctant to do so after several bad deals and an awareness that with land came power and wealth. The societal structure of Māori meant that land was occupied and looked after by family groups which further complicated the process.

In an attempt to have the voices of Māori respected on par with the Governor’s, the Kingitanga movement emerged in the Waikato region, in which local iwi united under a Māori king who they hoped could represent their interests with more authority under the Crown than as disparate groups. Under Te Tiriti of Waitangi, the treaty version in te reo Māori, Māori had a power sharing arrangement and the right to self governance, so this made sense. Under the English language version however, where Māori had ceded complete sovereignty, it amounted to a threat to the Crown. 10,000 British troops arrived from all over the British colonies to destroy the movement, and to seize Waikato land.

The Waikato War that emerged from the Kingitanga movement was a significant, and bloody, part of the New Zealand Wars but there were other battles raging around the motu (country) too. Most centered around this struggle over land, and the conflict between the two versions of the treaty. 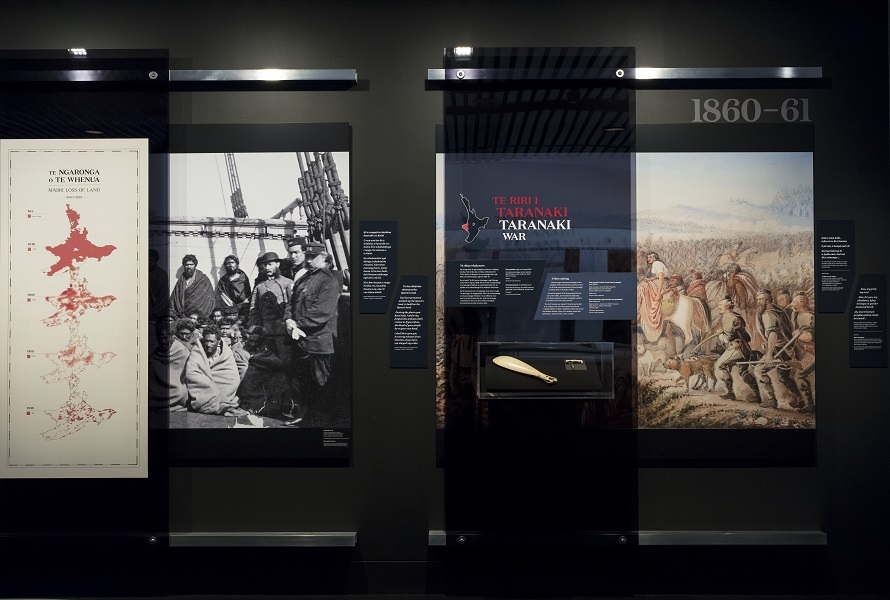 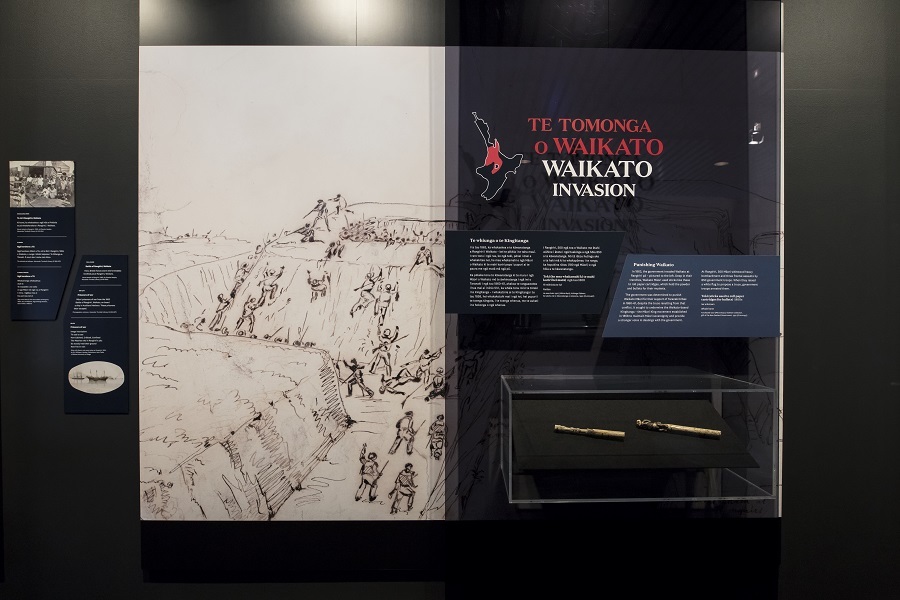 Click to expand
Part of the 2017 Te Papa exhibition on the New Zealand Wars, addressing the Waikato invasion. © Te Papa. All rights Reserved

By 1896, between casualties from the Musket Wars, the effect of novel diseases brought over with the English, and killings associated with the New Zealand Wars, over 50% of the Māori population had been wiped out from the estimated 100,000 it had been pre-European arrival. In contrast, Pākehā population numbers in this time soared to over 670,000 in response to New Zealands ‘gold rush’ mining period and assisted immigration schemes from England. As a consequence, a colonial government was firmly established in Aotearoa New Zealand and most of New Zealand’s Māori land and associated wealth was seized or confiscated by the Crown. Some of that land was tapu (sacred) as well as just fertile or valuable, and would later be subject to cultural and spiritual desecration by way of resource extraction, industrialization, or pollution, as we will hear in the next step.

Since 1840, governments have not always upheld the Treaty promise of protection for Māori. Where actions have been unjust they have created a sense of grievance among Māori. Recent governments have recognised this and set up processes to address grievances and restore good relationships.

In 1975, the New Zealand government created the Waitangi Tribunal, a permanent commission of enquiry, and they further strengthened its role in 1985. Its purpose is hearing, investigating and making recommendations on Crown breaches of Te Tiriti o Waitangi from 1840 to the present day. It offers recommendations to the Crown on settlements of treaty claims by Māori. Claims are then settled by the Government’s Office for Māori Crown Relations – Te Arawhiti. Over the past 33 years, there has been over $2.27 billion paid out in settlements for Crown breaches of the Treaty.