Find out more
Home / Healthcare & Medicine / Veterinary Science / One Health: Connecting Humans, Animals and the Environment / What are zoonoses?

Most human pathogens originate from non-human hosts. Diseases circulating between humans and animals are known as zoonoses, which are the key drivers of the emergence and re-emergence of infectious diseases.

In 2012, the World Bank recommended engaging in a systemic approach for zoonoses control, considering integrated surveillance-response (iSR) and control of human and animal diseases for primarily economic reasons.

Integrated surveillance-response systems have been advocated in Africa and been promoted as part of the Field Epidemiology and Laboratory Training Programs (FETP/FELTP) and the first integrated digital solutions like AfyaData have been proposed. iSR systems are used for West Nile virus, Rift Valley fever, influenza, schistosomiasis, zoonoses in general, and for antimicrobial resistance surveillance.

Yet despite these numerous examples, contemporary surveillance-response systems remain separated for humans and animals. Specifically, examples validating the postulated savings from iSR systems proposed by the World Bank are very rare. One example is an integrated West Nile virus (WNV) surveillance-response in mosquitos, wild birds, horses and humans, which demonstrated financial savings, when compared to single species surveillance in the Emilia Romagna region, Italy between 2009 and 2015 (Paternoster et al. 2017)

Figure 1 (below) shows a schematic proposed by the World Bank that has been extended to also include the environmental dimension, wildlife, and water bodies as potential reservoirs for zoonotic pathogens. The general conclusion from the World Bank framework is: (i) the earlier a zoonotic pathogen is detected in the environment, wildlife, or domestic animals; and (ii) the better human, animal, and environmental surveillance communicate with each other to prevent an outbreak, the lower the cumulative costs. The ongoing COVID-19 pandemic juxtaposes Figure 1. Consequently, there is a pressing need to deepen the understanding of the interface of pathogen transmission between the environment, wildlife, domestic animals and humans as part of a complex social-ecological system (SES). 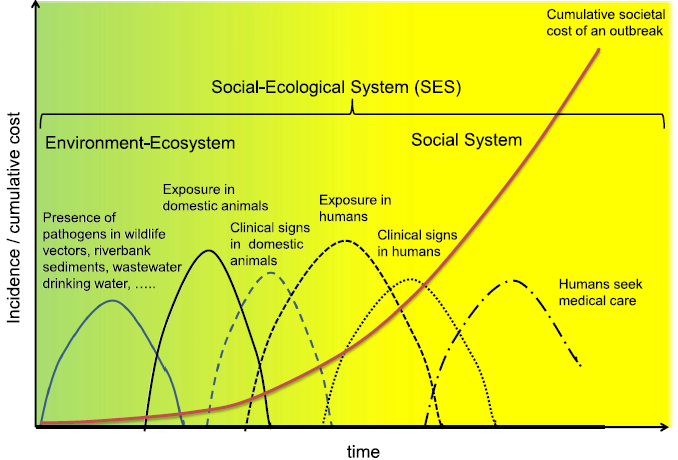 This article is extracted from Zinsstag et al. 2020.