In this article, Karin Hediger describes a few examples that document how human health can benefit from the relationship to pets.
© University of Basel

Numerous scientific studies over the past three decades support people’s intuitive belief that there are health benefits from relationships with companion animals. Below we refer non-exhaustively to examples described in two book chapters and to an article with an impressive range of newer publications. They summarise that companion animals are more than just companions.

Research findings are encouraging: animals contribute importantly toward our health in a number of ways. Studies showed that they can improve human cardiovascular health, reduce stress, decrease loneliness and depression, and facilitate social interactions. There are more on-going studies on how human-animal interaction influences our physical or mental health and social well-being.

Some examples demonstrate how adults interacting with animals experience positive effects: people in the presence of a friendly animal in a Western context received more positive attention. This was indicated for instance by the fact that they had longer conversations. Dog and cat owners reported making fewer visits to health care providers and taking less medication for sleeping problems than non-pet owners. Researchers also found a decreased risk for cardiovascular disease, particularly lower systolic blood pressure, lower plasma cholesterol and an increased survival time after myocardial infarction for dog owners. One can measure a decreased heart rate from petting a dog or watching fish in an aquarium. These positive health effects may be mediated by more physical activity, especially walking for dog-owners, and decreased stress levels via the activation of the oxytocin-system. 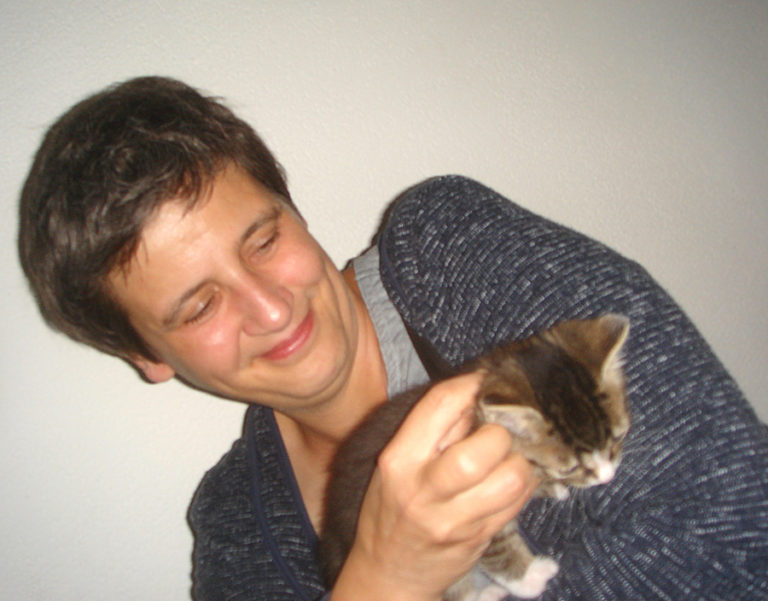 Esther Schelling playing with a kitten

Pets can lead to increased empathy and self-esteem in children. Many children regard their pets as close friends and family members, to whom they turn in times of distress. Additionally , the quality of the social interactions between child and caregiver is strongly associated with the quality of children’s development, not only in the social domain but probably also with regard to cognitive learning.
In families with epileptic children the quality of life improved when a dog responding to the seizure of the patients was present at home.

The interaction with a dog was shown to reduce tension and confusion in the elderly and restlessness in patients with dementia. In many instances, human health professionals can contribute to the welfare of their patients by encouraging them to maintain bonds with their pets, even in the face of serious illnesses and other challenges.

Animal-assisted therapy can lead, for example, to a significant reduction of depressive symptoms. We will go into more detail about this in the following step.

Animals cannot and should not replace human relationships. However, in certain situations or for a given group of patients or students, animals may be more effective than human therapists, teachers, or even friends and family alone due to their special qualities such as unconditional acceptance and nonverbal communication.
Only animals that like to work in such educational or therapeutic settings and that do so without appreciable levels of stress will contribute in the ways described above. For a One Health approach, this aspect of the animal’s well-being in animal-assisted interventions and companion animal ownership is of utmost importance.

Hediger, K. and Beetz, A. (2015). The Role of Human-Animal Interactions in Education, in: Zinsstag, J. et al. One Health. The Theory and Practice of Integrated Health approaches, Wallingford, CABI, 73-84.

Beetz, A. et al. (2012). Effects of Social Support by a Dog on Stress Modulation in Male Children with Insecure Attachment, in: Front Psychol. 3, 352.