How Does Artificial Intelligence Transform Society?

In this article, we discuss the social impact of Artificial Intelligence, explaining how AI is leading to a more digital society. 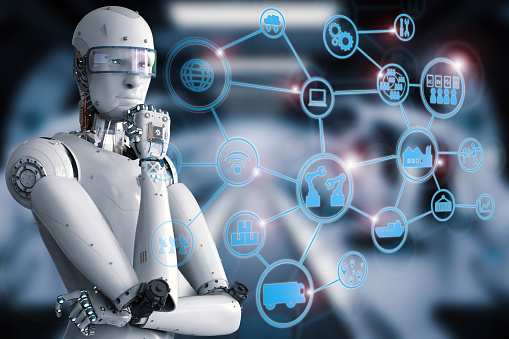 In this article, we discuss the social impact of Artificial Intelligence. We explain how AI is part of what has been called ‘the Fourth Industrial Revolution’, resulting in ‘Society 5.0’: a digital society in which a new generation of technologies starts to play a fundamental role in Human existence.

The rise of Artificial Intelligence is often seen as part of ‘the fourth industrial revolution’. Following the invention of the steam engine in the first revolution, the second revolution brought mass production and the third revolution offered computerisation. In the current, fourth revolution, this information technology becomes physical: in the age of digitalisation, the internet has become an internet of things and the computer can have the body of a robot. As a consequence, AI-powered digital technology has become intertwined with all aspects of society and it is becoming increasingly obvious that a new society is emerging.

In Japan, the type of society that is emerging from this fourth revolution is now called ‘Society 5.0’. From this perspective, the plough caused the transition from a hunter-gatherer society to an agricultural society, after which the steam engine enabled the industrial society and the computer led to the information society. The fourth revolution is now leading to the fifth society type: the digital society, also called the ‘super smart society’ in Japan.

Digital technologies are shaping new configurations in the relationships between humans and technology. The traditional image of technologies being ‘used’, as a means to an end, no longer applies to most digital technologies. The difference between an ‘active’ user and a ‘passive technology’ is making way for a much closer interconnectedness between humans and technology. AI systems enable configurations that previously only existed between humans, such as ‘interaction’ (robot and human respond to each other, are configured to understand one another, and are influenced by each other) or ‘cooperation’ (human and algorithm are directed the same reality and act on the basis of their mutual interaction, such as medical expert systems that give advice to doctors on the basis of a common relation to the same patient).

Of all the technologies from this fourth revolution, Artificial Intelligence is without a doubt the most striking – and also the most feared and the most celebrated. While the US, China and the EU become entangled in a digital race, influential techies like Elon Musk and Bill Gates warn of the risk of this artificial intelligence overpowering humankind, and bestselling authors like Yuval Noah Harari write terrifying futuristic stories. A few years ago, ethics focused mainly on ‘human improvement’: are we heading towards the creation of a ‘super human’, and will that be accompanied by a new inequality, injustice and indignity? Meanwhile, the discussion focuses more on ‘human substitution’: are we laying ourselves open to domination by our own technology? From a fear of ‘too much of the human’ we have shifted to a fear of ‘too little of the human’.

AI enables computers to do things that previously could only be done by people: from making diagnoses and taking decisions to delivering judgements and controlling robot-bodies, from activating storm surge barriers and analysing the studying behaviour of schoolchildren to generating search results on the internet and live translations of the spoken word. It is entirely probable that artificial intelligence will have a huge impact on our society. And it is not always easy to cope with that impact, because it smashes through existing frameworks. Until now we have seen technology as ‘passive’ and humans as ‘active’, but artificial intelligence possesses a technological form of ‘autonomy’. Computer systems can ‘learn’ and consequently develop in ways that their programmers could not always have predicted; and they are in a position to take decisions independently and to advise people on things that human thinking is less well equipped to oversee than a computer with artificial intelligence.

We cannot separate humans and technologies anymore: AI systems affect how we act and perceive the world, and at the same time they are affected by us, and learn from us. Quite literally so: Microsoft, for example, had to suspend its smart Taj chatbot within 24 hours when people uploaded racist remarks and Taj itself posted racist and inflammatory tweets. This blurring of the boundaries between humans and technologies challenges our understanding of human-technology relations, and our ethical frameworks. What does it imply, for instance, that Saudi-Arabia gave personhood to the humanoid robot Sophia? Personhood implies agency, but what kind of agency do robots have? Agency comes with responsibility, but where should we locate the responsibility of a robot: in the designer, the programmer, the company producing it, or in the robot itself? And should we expand our notion of human rights towards robot rights? Will it at some point become morally problematic to switch off a robot?

The core of the societal impact of AI lies in its effect on the cognitive functioning of humans: AI changes human thinking. From a historical perspective, this is not something new. Writing, for example, had a huge effect on how our memory worked: Plato worried that we would no longer be able to remember anything if we could write it all down. Book printing is a similar form of cognitive technology: all of a sudden, knowledge was no longer hidden away behind monastery walls. This led to its democratisation and ultimately laid the foundations for the scientific revolution. What is the new step in our thinking that AI will bring about? What will happen to our understanding of the world and ourselves, our moral and political opinions and conclusions, our existential questions and vulnerabilities? And how will AI impact the way our democracy functions, the relationship between citizens and government, and the possibilities to participate in society?

As with many other technologies, it is a good idea to distinguish three levels of the impact of digital technology. On an individual level this technology affects the choices, behaviours, and frames of interpretation of individual users: search machines determine which information people use to shape their image of the world, expert systems provide doctors and judges with a context for a diagnosis or a judgement, smart cities guide car drivers to specific parking places and dynamically regulate the maximum speed. On a social level this influence feeds through into social domains such as health care and jurisdiction (via expert systems), traffic and transport (via self-driving vehicles), journalism (in the form of ‘automated journalism’). Finally, on a societal level, digital technology has an effect on the organisation of society: ‘predictive policing’ is changing the nature of the enforcement role of police, search engines influence political engagement, algorithms are involved in military decision-making.

For more, check out the following keynote about AI at work by Peter-Paul Verbeek.