Images of babies in baby books

Why are so many baby books obsessed with showing faces of babies? Scholar Perry Nodelman explains. 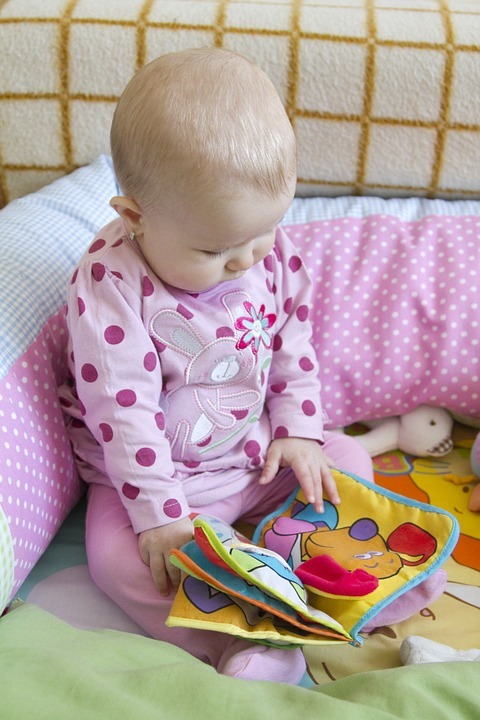 Books for babies are often dominated by pictures – they are essentially visual.

Yet… many of them have other features: texture, size, and even sound and smell, as well as objects attached to them (mirrors, whistles, fluffy toys, etc.) They might be hard, soft, huge, minuscule, inflatable, shaped as animals, on wheels, etc.

Analysing baby books requires taking into account those other elements, which contribute in their own ways to their ‘narratives’.

Furthermore, many books for babies are full of pictures… of babies.

“Most of the books available in the “Baby Books” section of my local bookstore are sturdy, short board books printed on durable cardboard stock. This format is not surprising, for they are intended for the youngest of readers/viewers, those unlikely to understand that books are not intended as substitutes for weapons or teething rings.

Browsing in that section recently, however, I was surprised by something else that so many of them had in common. A lot of them consisted merely of images of babies, some in cartoons, but mostly in colour photographs. Why were so many adults interested in providing pictures of babies for baby readers, and why would they think that a baby might want or should want to look at pictures of other babies?

Is there an assumption that babies looking at these books see someone like themselves, or is it that they see the other babies in the pictures as significantly other? Or is it somehow both at the same time?”

Nodelman’s theory is that baby books encourage babies to develop a form of self-awareness that moves beyond the self-unconscious state of the early months. Through baby books, babies begin to see themselves as they are being seen by others from the outside.

That vision is fundamentally egocentric – and it is, Nodelman shows, very idealistic, too – but, through it, babies might experience a burgeoning sense of self as object of others’ gazes and attention.

We see here how baby books encourage not just early forms of visual and verbal literacy, but also awareness of oneself and one’s representations in the world.