How have scholars defined comics? Let's find out. 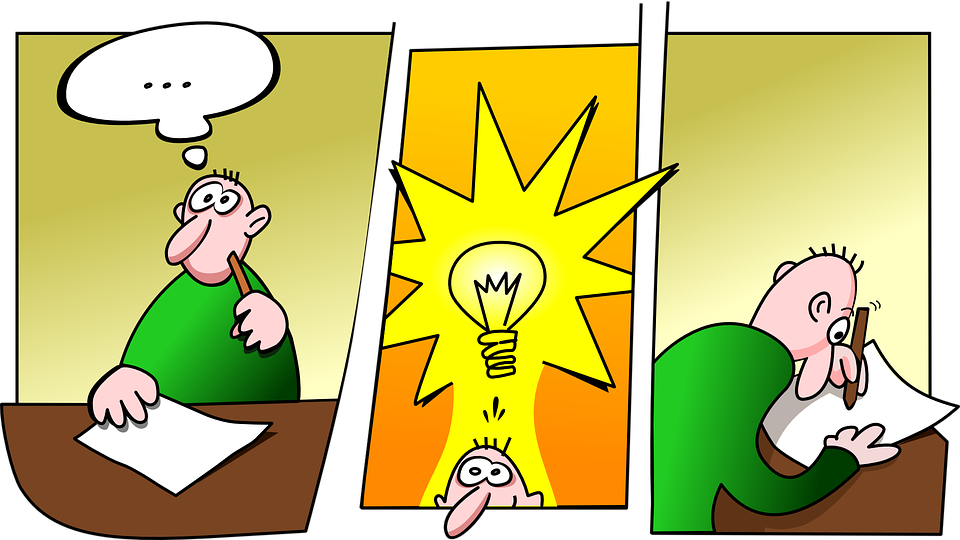 Look at the image above. Why would most people, if prompted, call it a comic? (in this case, a comic strip)?

Arguably, because it contains the following elements, which many comic scholars generally agree are constitutive of the medium:

We are generally alerted to the fact that we might be looking at a comic strip by the presence of pictures that mix verbal and visual information, with more of the latter.

Comic scholar David Kunzle talks of comics as, in general, presenting “a preponderance of image over text”.

Of course, it’s not always the case. Some experimental comics are entirely made up of text; other comics, as we’ll see later, are all pictures. This one, in fact, has no words – just punctuation…

Comics are comprised of several pictures (we generally call them panels – we’ll get to that in a next step), placed close enough to each other that they can be processed together.

One of the problems with this definition is that it seems to rule out one-panel cartoons as comics. We could say that one-panel cartoons share many of their formal and stylistic features with comics, and thus belong to the same family. They certainly require very similar literacy skills and many scholars don’t make a distinction between comics and cartoons.

Sequentiality is perhaps the most important defining feature of comics.

When the reader looks at the different pictures one after the other, they should make up a narrative; a story. To that aim, the pictures are arranged as a sequence.

The sequence, importantly, implies the passing of time. We truly become readers of comics when we being to understand that some time has passed between one picture and the next.

By saying that the sequence is deliberate, McCloud hints at the intentionality behind the comic: the creator. But of course, the order s/he wants the pictures to be read can always be transgressed by the reader…

The three features above are the most-frequently found in definitions of comics as a medium. There are other clues, however, that you might have picked up on, which traditionally indicate that we might be dealing with comics of a certain tradition. They are comic conventions.

In the above strip, it contains an ellipsis. As readers of comics, we know from the shape that it is a thought bubble – nothing instinctive about that, of course; it is a symbolic convention we’ve learned.

Speech and thought bubbles are perhaps the most recognisable convention of comic art, although they are not necessary for a strip to be considered a comic.

The lightbulb is a typical convention of visual culture in the West, symbolising the birth of an idea. Comics often use conventional symbols to express emotions or thoughts in a visual way, and the use of the ‘lightbulb moment’ here, while by no means specific to comics, gives a clue that we might be dealing with that medium.

Think about comics as you would film. Within the film medium, you can have rom-coms, superhero movies, pirate stories, psychological thrillers, etc. Those are genres. So comics, like films or novels, can present romances, long postmodern meditations, biographies, space operas or detective stories.

Similarly, just like films can be in black and white, animated, in one take, highly stylised, in Technicolor, or shot with just a handheld cameraphone, comics come in many different styles and graphic identities. Black and white or colour, photorealism or stick figures, square panels or daring angles… There is no such thing as a ‘comic style’ of drawing.

However, it is true that what is sometimes known as a ‘cartoonish’ style – as with the image above – directly alerts us to the fact that a sequence of images might be a comic. By cartoonish we can mean exaggerated features, simplified or flattened surfaces, bold colours, and a sketch-like approach to backgrounds. This style can be thought of as neighbour to that of traditional political caricature and many instances of children’s illustration.

While such style is by no means constitutive of comics as a medium, it can provide an important visual clue to contemporary readers that they could consider switching to ‘comic-reading’ mode. In other words, it activates specific reflexes of an individual’s comics literacy.