We've been thinking about ways in which Studio Ghibli's works might be considered 'children's films'. But their fans are spread across all ages. 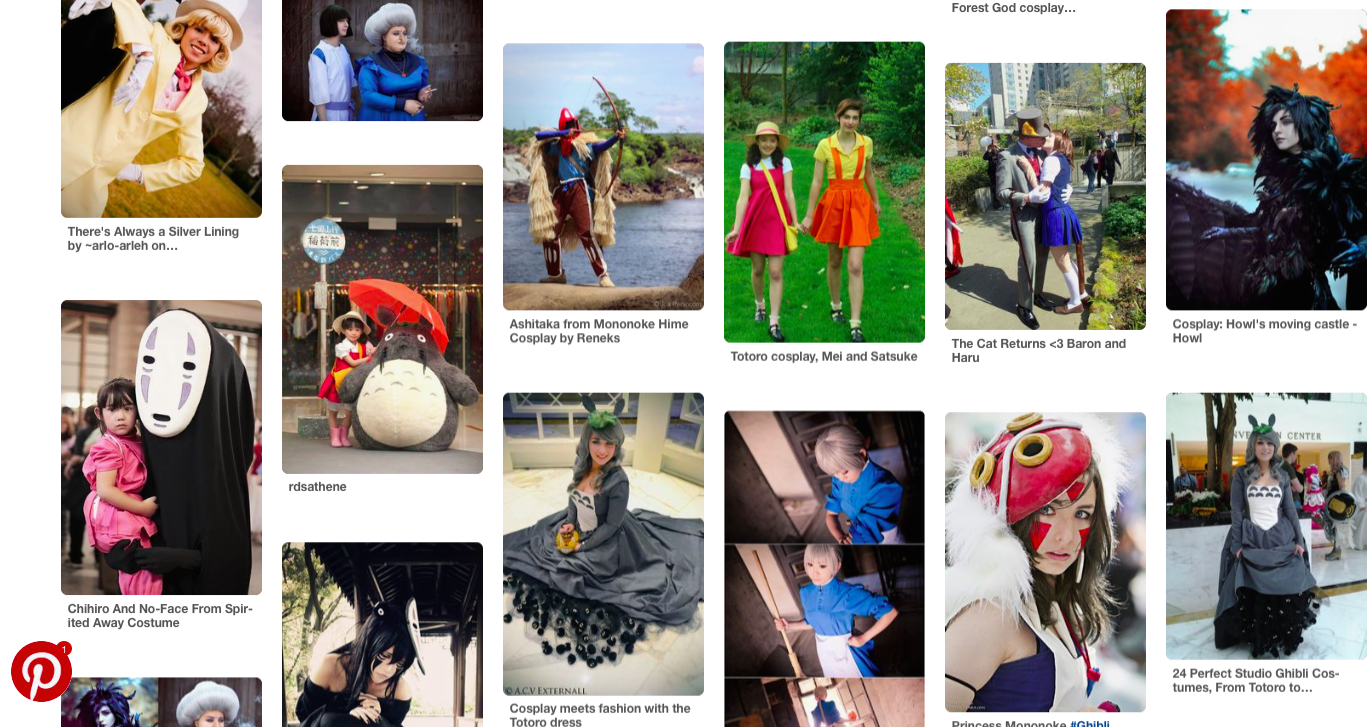 Anime is familiar to Japanese audiences as something made for and consumed by both children and adults, though particular animes target and attract particular age ranges. Studio Ghibli’s dedicated fans range across age groups – see the examples of Ghibli cosplay pictured above.

The term ‘cosplay’ is a contraction of the words ‘costume play’. Cosplay involves participants wearing – often designing and making – costumes, accessories and make-up to represent a specific character. Moreover, cosplayers will often reproduce aspects of the character they represent such as their pose or voice. Although cosplay can be used broadly to refer to ‘any act of dressing in costume’, in almost any imaginable context, ‘it is principally used to describe the fan activity of dressing as manga and anime characters’, explains cosplayer and academic Emerald King.

King goes on to explain that although ‘cosplay’ was used in English, at first, ‘to refer only to costumes based on Japanese products, the definition has broadened to include western comics’. So you will now find cosplay involving Marvel fans dressed as Captain America, for example. One place that you can find cosplayers in droves is at popular culture conventions, featuring traders, screenings, and celebrities, such as comic-con (comic book conventions). Reading King’s full article in The Conversation will give you a sense of the ways in which cosplayers of all ages interact with each other: to collaborate in, for instance, posing for photos renacting pivotal scenes from films or books, or to compete to make and present the best realisation of their character.

Origins and definitions of cosplay, much like those of ‘children’s film’ are multiple and contested. Whereas Emerald King foregrounds cosplay’s roots in Japanese culture, Nicolle Lamerichs’ writing highlights American influence on Japanese culture:

The term ‘cosplaying’ was coined in the eighties by the game designer Takahashi Nobuyuki when he encountered the costuming practices of American fans on a visit to the United States (Bruno, 2002; Winge, 2006, pp. 66–67). In Japan, cosplay has become very prominent since then. In Western settings, there seems to be much overlap between cosplay and other forms of dressing up such as (live-action) role-playing, but also digital dress up such as customizing one’s avatar. In cosplay, games and anime are embodied and transposed to new, physical settings. Players explicitly relate their own body and behaviour to fictional characters (Lamerichs, 2011)…

Though fans wear their outfits in the hallway of conventions, they also use them in specific settings or events such as cosplay competitions, fashion shows or photo shoots. The competitions, also known as masquerades, are often theatre skits that involve a performance in which the player really acts out the character. Fans enjoy having their picture taken in their outfits. Photographers in turn can specialize in photographing cosplayers as a creative hobby. Though a cosplayer can perform the character in part, for instance by walking around with his or her attitude, the overall idea is a visual one. Cosplay is based on recognition, more than reenactment as fans are not, and cannot be, in character at all times since the convention is also a social sphere in its own right…

Another subtype of fan costumes in Western culture is inspired by the tradition of Renaissance fairs and historical reenactment which have also resulted into practices as live-action role-playing. In the latter, enthusiasts base costumes on genre-fiction (e.g., fantasy) or historical periods in a co-creative game for which original characters are designed and reenacted (Lamerichs, 167).

For all their differences, both King and Lamerichs capture the centrality of visual appearance to cosplay.

In terms of exploring Ghibli’s wide appeal, you could also check out Ghibli fan art (including a lot of edible works) and merchandise using a search engine, Pinterest boards and Tumblrs. Let us know what you find in the discussion below.

We can use this evidence of Ghibli’s actual audience, their fan base, to problematise the labelling of their works as ‘children’s films’ and to further show how thorny a term that is.