The problems with influenza

Most of us have contracted the flu at least once in our lives, usually during the colder months. Some have had it more than others.
© Griffith University

Why do we keep getting the flu?

Influenza (the ‘flu’) is a viral infection that attacks the respiratory system. If you’re young and healthy, you generally just need to rest and possibly treat your symptoms. Others, however, such as the very young, the elderly, or those with weak immune systems may require antiviral treatment.

We’ve beaten the virus, we’ve even had the vaccines, so why are we not immune? The thing is you are actually immune – at least to those particular strains that you have already had.

Influenza viruses are divided into four types A, B, C, and D. Types C and D don’t usually cause problems in humans, whilst types A and B are the ones that circulate amongst humans causing seasonal epidemics.

Influenza A is the only type known to have caused pandemics. The Spanish flu of 1918 is one example, caused by a strain of the H1N1 subtype. This pandemic resulted in the deaths of anywhere between 21 and 100 million people (Jordan, 1927; Johnson & Mueller, 2002), or around 3 – 6% of the world population. Unlike seasonal flu, Spanish flu killed mostly young healthy adults.

This may have been due to circumstances related to World War I such as malnourishment and overcrowded hospitals, resulting in secondary bacterial infections (Brundage & Shanks, 2007). Another theory is that this strain caused the immune system to overreact, so those with healthy immune systems were more affected (Barry, 2004).

The image below shows you the difference between the antigenic drift and antigenic shift processes. 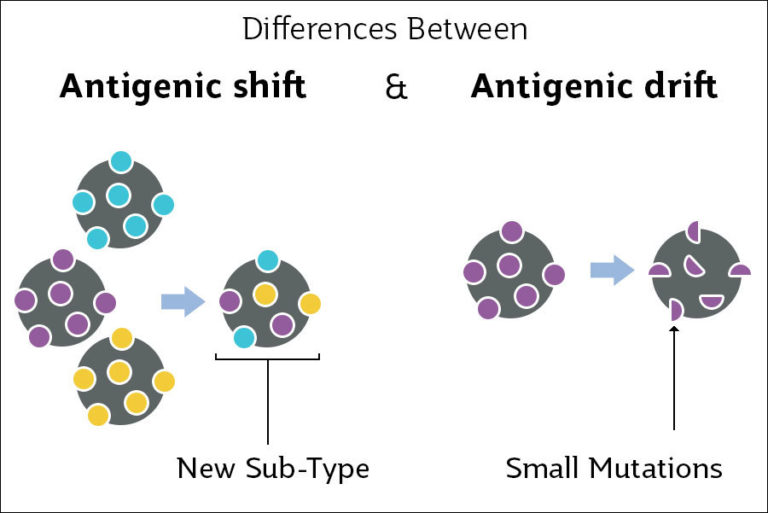 Avian influenza (bird flu) is also of concern. Many species of birds are migratory so when strains of avian flu gain the ability to infect humans, they have the potential to spread extremely rapidly.

Luckily, so far, avian influenza strains have not been easily transmissible among humans. However, should this occur, the fact that birds are migratory would be irrelevant as we could spread the disease ourselves. This could certainly result in the next devastating influenza pandemic.