Article describing egg production and the reproductive cycle in chickens.
© University of Nottingham and the British Hen Welfare Trust

Given free choice a hen will choose to mate with a dominant male with a large fleshy comb or one that flaps his wings more often than nearby competitors, both behaviours illustrate signs of health and fitness.

Cockerels balance their feet on top of the female, grabbing head feathers to remain steady. They then perform a ‘cloacal kiss’ by coupling their tail under the female’s tail during which time the sperm is transferred.

Repeated mating with one hen can lead to feather damage and/or further injury to the hen. It is important to ensure the female to male ratio is correct, although breeders use saddles to protect the hen in some instances.

The entire mating procedure may only take a few seconds but allows enough sperm to transfer to the female enabling her to fertilize future eggs for several weeks. 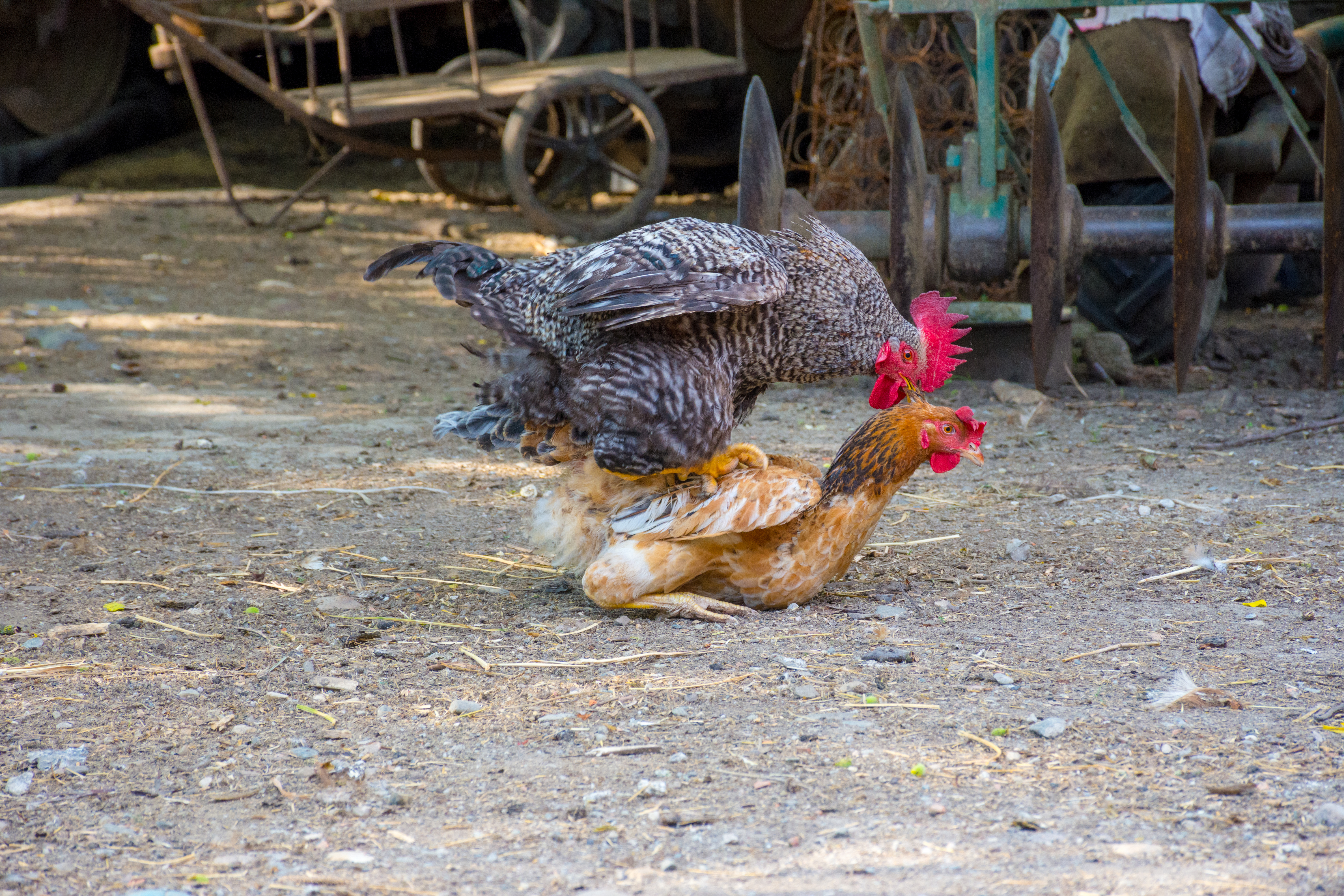 A cockerel mating with a hen, ©iStock, Aron M.

Shell colour is determined by the colour of the earlobes, with white earlobes generally resulting in white eggs and red ears producing brown. Whilst there is no nutritional difference in brown v white eggs, public preference differs from country to country with the majority of Europe preferring brown, but Scandinavians and Americans preferring white.

Female chickens have 2 ovaries but only the left ovary produces ova with the right being non-functioning.

The oviduct comprises the infundibulum magnum isthmus uterus and vagina; passage of an egg through the oviduct takes roughly 25 hours.

Following ovulation the oocyte passes into the proximal opening to the oviduct, the funnel-shaped infundibulum. It generally takes 15-20 mins for the oocyte to transit the infundibulum and it is here that fertilization by the spermatozoa takes place if sperm is present.

The next phase of egg production occurs when the oocyte (or zygote) passes into the magnum where hygroscopic proteins form the main components of albumin. It remains for roughly 3 hours.

From the magnum the oocyte (or zygote) enters the isthmus taking 1.5 hours to transit. It is here that the inner and outer shell membranes are formed (later separating at the blunt end of the egg to form the air cell). More albumen is added in the isthmus.

The uterus or shell gland is a pouch like section of the oviduct. The final component of the albumen is added in the uterus along with large amounts of water which combine with the proteins and form the egg white.

It takes a further 20 hours during which time the calcareous shell is formed from calcium carbonate and other calcium salts and the final layer known as the cuticle is added.

The distal section of the oviduct is the vagina and eggs take an average of 5-10 minutes to pass through this section. Also located in the vagina are the tubular utero-vaginal sperm host glands where sperm can be stored and remains viable allowing the hen to lay fertilized eggs two weeks after mating.

During lay the pointed end of the egg emerges first and a physiological prolapse of the cloaca occurs but in most instances does not persist. Subsequent ovulation occurs 30 mins after an egg is laid.